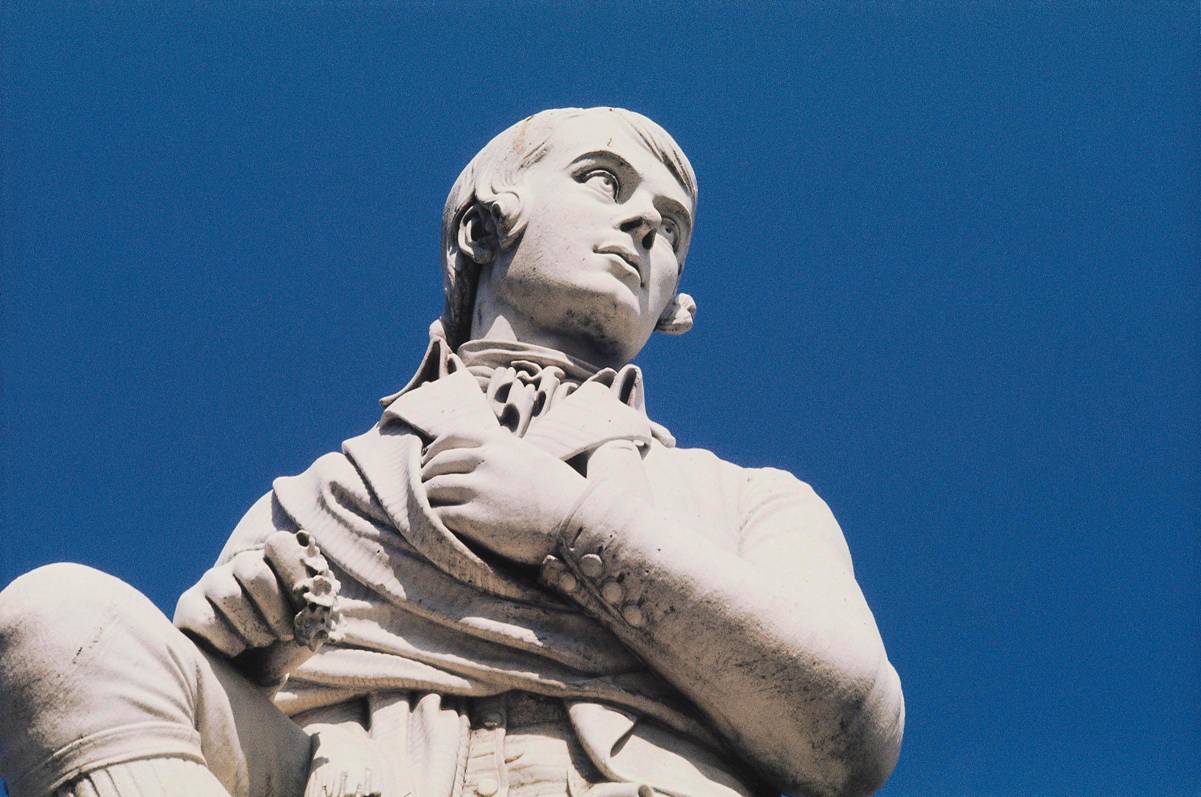 He survived the cancel culture of his day to become the favorite poet of presidents. His song Auld Lang Syne is among the most recognized choruses in history. He championed honesty and humility over wealth and rank. Son of a farmer and hailing from an obscure village in southwest Scotland, Robert Burns became a household name in the United States throughout the 19th century, inspiring many in the new republic with his catchy lyrics promoting equality, liberty, and democracy. And in 2022, he can inspire us again to be a humble, grateful people deserving of the American experiment.

Long before the Battle of Fort Sumter ignited the Civil War in 1861, a teenage Abraham Lincoln discovered Scotland’s Bard. Along with Holy Scripture and Shakespeare, Lincoln quickly committed to memory some of Burns’s most popular poems and songs, including Tam o’ Shanter, The Twa Dogs, and Scots Wha Hae. Here was a man from similar humble beginnings who not only shared a strong faith in God’s providence but also conviction in the intrinsic worth of the ordinary individual. As Ferenc Morton Szasz points out in his book Abraham Lincoln and Robert Burns: Connected Lives and Legends, Lincoln found in Burns a kindred spirit he would carry with him throughout his whole life. And it would not be unreasonable to say that Burns’s lyrics about the equality of man reinforced the belief in Lincoln’s heart that all men are created equal. “The rank is but the guinea’s stamp,” Burns puts it. “The man’s the gowd (gold) for a’ that.”

Some say we’re on the verge of another civil war in America. And while that may sound extreme, it’s certainly true that we’re a divided people. Respectful interaction is getting harder to find. Tolerance is in short supply. Vitriol is plentiful. But Burns can help us move past this polarizing, combative moment to see each other once again as brothers and sisters. His advice is threefold: rise above cancel culture, remember who we really are underneath it all, and live with that “soul of Freedom.”

Burns offered bold ideas in his work, and for that, he had his haters. If he had kept his mouth shut like his superiors in the Board of Excise wanted him to, he would have gotten promoted. But he couldn’t, and we’re all better for it. Whether it was ratting on him to authorities as a sympathizer of the French Revolution or walking on the other side of the street to shun him, upset locals and leaders made efforts to de-platform him. But while he vented privately to friends about the miscreants who “deliberately plot the destruction of an honest man,” he kept writing, penning some of his bravest and best lines in what would be the last years of his life.

Burns had a keen sense of human nature, knowing we all have the same worth irrespective of title, class, or background. For this, he is cherished by those of all stations in life. In his book, Szasz declares that “[f]reethinker and cleric, Democrat and Republican, socialist and entrepreneur—somehow everyone could find a way to celebrate the lyrics of Robert Burns.” And if you know your worth and the value of those around you, Burns holds, you’ll be more likely to “gently scan your brother man, Still gentler sister woman,” and let He who made the heart do the judging.

Burns was a great admirer of the American cause of independence. His Ode for General Washington’s Birthday may as well have been an ode to liberty itself: “But come, ye sons of Liberty, Columbia’s offspring, brave as free, in danger’s hour still flaming in the van, Ye know, and dare maintain the Royalty of Man!” He goes on to praise the arm that crushed Usurpation’s boldest daring and the Despot’s proudest bearing. Seeing America come into its own would have gladdened Burns’s heart immensely. Let’s live with what he described as the soul of Freedom. Let’s take none of our freedoms for granted. And let’s fulfill the responsibilities of freedom too, both to our nation and to our fellow citizens.

Robert Burns has been dead for over two centuries. The American republic has been alive about the same amount of time. Burns lives on through his words, and every year his birthday is celebrated across the globe, for good reason. America can live on too, if we can remember who we are and the value of what we hold in our hands.

Andrew McDiarmid is a senior fellow at the Discovery Institute. Born and raised in Scotland’s capital city, he hosts Simply Scottish, the long-running podcast of Scottish music and features. His writing has appeared in the New York Post, The Scots Magazine, History Scotland Magazine, and others. Learn more at www.andrewmcdiarmid.org.

This piece first appeared on the American Greatness website: www.americangreatness.com