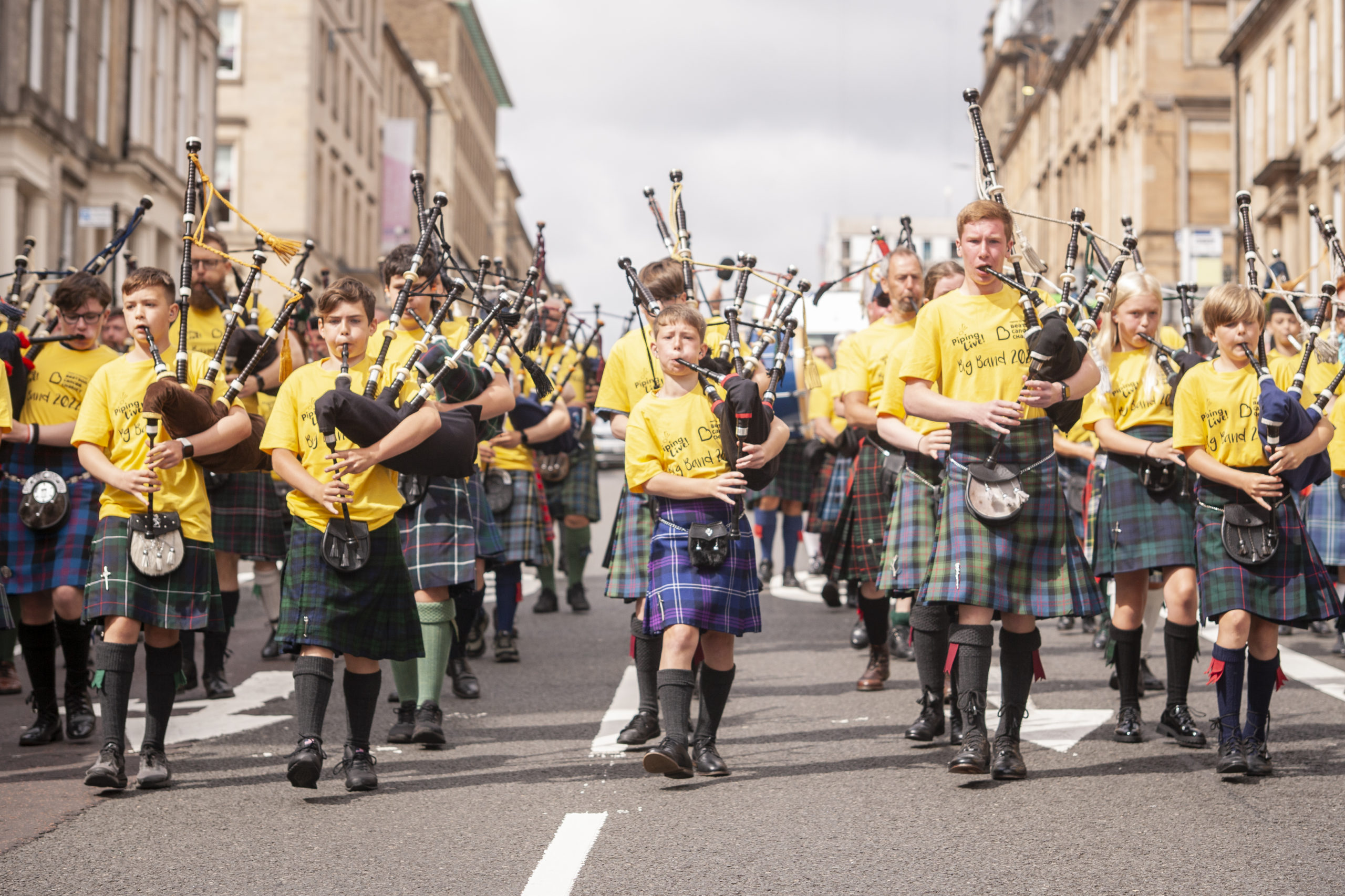 By: The National Piping Centre, Glasgow

As we all know, the last couple of years have been tough and it has really been felt by those of us who make music. But we are looking ahead to a 2023 that will be packed with all the things we love – pipe bands playing together, music festivals where we can share the experience of live music once again and the world’s best going head-to-head throughout a full piping and drumming season. 2023 will be a special year for a number of events – read on to find out why!

Glasgow comes alive at the darkest time of year, as the UK’s premier celebration of Celtic music, Celtic Connections returns with a full 18-day programme from 17th January – 5th February to celebrate its 30th Anniversary year. Opening with a spectacular 30th Anniversary concert and featuring high profile traditional musicians such as John McCusker, Treacherous Orchestra and Karine Polwart, as well as a host of up and coming artists, and those pushing the boundaries of their art forms. Head over to the website now find out more – www.celticconnections.com

As well as Celtic Connections, solo pipers are heading to Kansas City once again this January as Winter Storm, organized by MHAF, returns from 12th – 15th January, after a 2-year hiatus. The Competition League for Amateur Solo Pipers also returns in January, with an in-person event in Glasgow on 14th January. This league has an overall and online-only titles so you can compete as an amateur solo player from anywhere in the world. The latest online event saw competitors from Hong Kong to Hawai’i join the event! If you are an amateur player and would like to find out more go to www.theclasp.co.uk.

There is also a plethora of events in the Southern Hemisphere with pipe band events, solo competitions and more. On 1st January, New Zealand holds its first major solo piping and drumming event of the year and the 150th Anniversary of the Waipu Highland Games. Then from the 11th – 15th January, the Royal New Zealand Pipe Band Association will host its summer school. After a year’s hiatus due to the pandemic, this event returns to Christchurch. This Summer School is the perfect opportunity to learn from world class tutors, and it showcases some of the best talent New Zealand has to offer. The RNZPBA is excited to bring the NZ & South Pacific Pipe Band Championships to Christchurch on Friday 10th and Saturday 11th March. The celebration of Scottish culture and music will include pipe bands from throughout New Zealand and Australia.

Then on 18th February, our National Piping Centre Junior Piping Championship returns, one of a host of fantastic contest for young pipers aged Under 18 across the country every year. It aims to encourage all young players to compete, with chanter competitions through to Piobaireachd events.

The National Piping Centre’s Adult Gatherings return from 6th – 19th February, for the first of four events across the year. You can join these schools in person or online, so you can get tuition from the world’s best, wherever you are across the globe!

On 11th March, the adult solo piping season kicks off in Scotland with the Duncan Johnstone Memorial Competition which is held at The National Piping Centre and managed by the Competing Pipers’ Association for B and C graded pipers.

The National Piping Centre’s Junior Gatherings return in April, from 3rd – 6th, with 4 schools throughout the year for pipers aged Under 18 to come and immerse themselves in playing, whilst meeting other young pipers.

The annual Chicago Highland Games has rapidly become the largest pipe band competition in North America based on the number of entrants, and the June 2023 edition will see the addition of a Grade 1 competition.  The Glengarry Highland Games take place August 4-5 in Maxville, Ontario, Canada and are home of the North American Pipe Band Championships. The Grades 1, 2, 3, 4 and 5 Band Competitions will take place on Saturday.

As we move into the Scottish summer (keeping everything crossed for some sunshine!) the pipe band season begins in earnest! The Royal Scottish Pipe Band Association have not announced the dates for four of their five major contests yet, with usually happen at the end of May, middle and end of June and at the end of July. However, the date for this year’s World Pipe Band Championships has been announced as the 18th and 19th August. Keep up with all the pipe band news at www.rspba.org

Piping Live! returns in full force to the streets of Glasgow in the run up to the World’s once again as Glasgow hosts the world’s biggest week of piping! This year, we are celebrating the 20th edition of our festival running from 12th – 20th August, which attracts performers and audiences from across the world. In 2022, we welcomed performers from Iran, Hungary and Estonia performing on their own styles of bagpipes, as well as Scottish Pipe Bands from Argentina, USA and Canada, as well as from across Scotland. We can’t wait for the 20th edition – keep up with what’s happening and register for email updates at  www.pipinglive.co.uk

The annual Chicago Highland Games has rapidly become the largest pipe band competition in North America based on the number of entrants, and the June 2023 edition will see the addition of a Grade 1 competition.  At the end of August, the piping world turns its focus to top level solo competition, with the Argyllshire Gathering taking place in Oban on 23rd and 24th August, and the Northern Meeting in Inverness happening on 31st August – 1st September. These see the world’s best solo performers gather to compete for the most prestigious solo piping prizes, as well as a chance to qualify for the Glenfiddich Piping Championship.

The Glenfiddich Piping Championship takes place at the end of October each year, and in 2023 will celebrate its 50th event on Saturday 28th October. 10 competitors will gather at Blair Castle to compete in Piobaireachd and March, Strathspey and Reel disciplines to be crowned champion. As it is a special year there will be a host of extra special moments planned. Tickets to join us in person at Blair Castle or to watch through the livestream will go on sale around mid-July through the National Piping Centre website.

But October isn’t all about solo piping, as on Saturday 21st October, the World Solo Drumming Championship takes place, here in Glasgow, with the best drummers gathering to compete of several rounds to be crowned the best. Inveraray and District’s Steven McWhirter has won a record 10th straight title in 2022, so let’s see what 2023 brings!

The Glenfiddich Piping Championship marks the end of the 2023 season, only for the 2024 season to start the very next weekend in London with the Scottish Piping Society of London’s annual competition, which has its 85th year in 2023. Also, in the USA and Canada there are several piping events through November, with the An Crios Gréine – Sun Belt Invitational Solo Piping Competition taking place in Florida and the George Sherriff Memorial Invitational for amateur players taking place in Hamilton Ontario. Dates for these events will be confirmed later this year.

So, if you are travelling this year, come and hear piping in Scotland – or look out for it around the world!

You can find out more about all The National Piping Centre’s projects at www.thepipingcentre.co.uk or get the latest news and results from the piping world at www.bagpipe.news which will give you details of events happening across the globe.