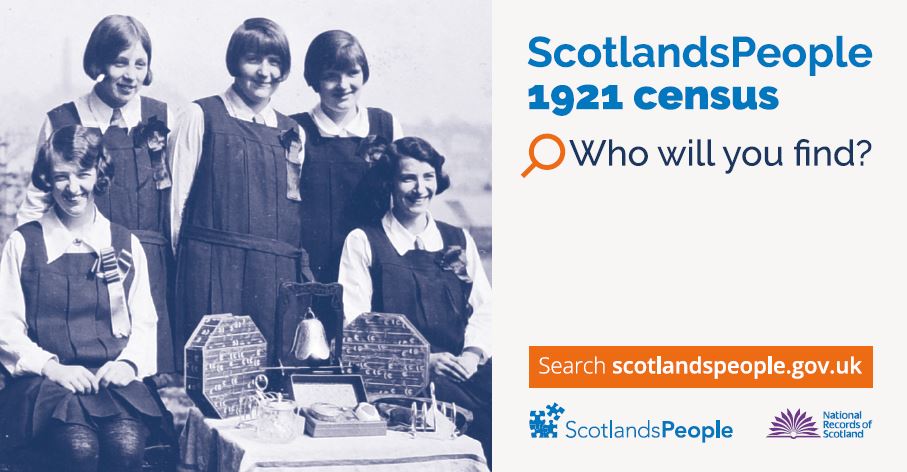 The 1921 census records, made up of over 9000 volumes of enumeration district books, have now been released by the National Records of Scotland (NRS) on the online research service ScotlandsPeople. 200,000 images of 4.8 million individual records can now be searched, viewed and downloaded and have been added to the census returns already available on the website, covering every 10 years from 1841. The census is a survey which collects information on every household, building and vessel in Scotland on a particular night. The enumeration books contain all of the information transcribed from the household schedules (which were destroyed after work on the census was completed) and can be seen online as full colour images.

The 1921 census revealed that the population of Scotland had reached 4,882,500 inhabitants; twice as large as had been recorded in 1831, and three times the size as in 1801. The effects of the First World War (1914-1918) and the influenza pandemic known as ‘Spanish ‘Flu’ (1918) had been felt, however, by local communities and were reflected in the 1921 returns. Between the 1911 and 1921 census the male population had grown by 38,803 and the female population by 82,790, totalling 121,593 individuals or a growth of around 2.5%. This was, however, the smallest increase since 1801 in any census period due to war and emigration. Over the years, the questions which formed the census have varied, but all are a guide to what the government at the time wanted to know about its population, including its size and age, location, sex and the variety of occupations employing its citizens. Details captured by the census were used to inform government policy at the time; immediately after the census was taken, as is still the case, statistics were made available publicly for demographic purposes. Today, however, these records offer a rich resource of contemporary information which can be explored by historians and genealogists alike in order to trace people, the history of buildings or local areas.

In Scotland the work of delivering the census was led by the Registrar General who relied on a network of registrars and enumerators to get census forms called “schedules” out to every household, filled in and returned. The information from the schedules was then copied into enumeration books by hand. It is images from the pages in those books that customers can find on ScotlandsPeople.  The census of 1921 was taken on 19 June.  Making the personal data of a census available is an unusual undertaking in that it unites two teams of workers 100 years apart. The Census Act of 1920 ensures that once the statistical information has been created from household data the personal information like names, relationships and ages must be kept confidential for 100 years. Only at that point can it be opened for members of the public to view.

To give people an efficient way of searching, digital copies have been taken of every page of every enumeration book and then every handwritten name transcribed into a computerised index. Quality review work has also been undertaken to improve accuracy.  With a ScotlandsPeople account people can search for their ancestors or other people of interest at no charge with just names and an idea of where they might have been living. There’s a fee to view the images. An account also offers website users handy ways of storing their finds in timelines so key information can be found quickly. The more information about where someone was living the better the chances of finding them. While there are no guarantees that a person is listed it is likely that they will be included if they lived in Scotland at the time. There are online guides full of hints and tips for users. Using the census is a great opportunity to turn detective and NRS invites everyone to tell them: who will you find?