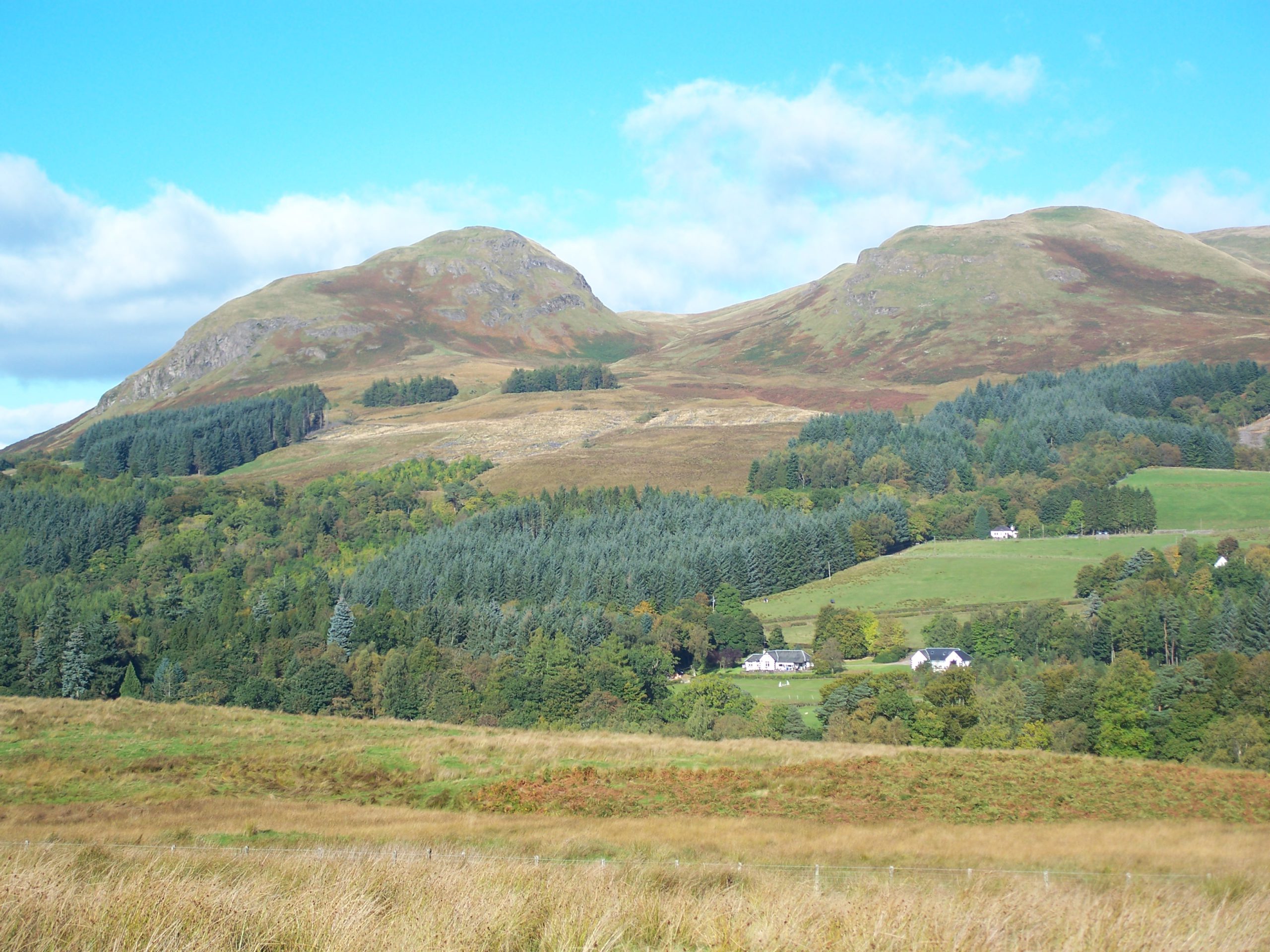 Words and images by: David McVey

I grew up in Kirkintilloch. Until the 1980s the town had a two-hourly bus service to Strathblane. In half-an-hour it swept us from our declining post-industrial hometown, westwards along the wooded lower slopes of the Campsie Fells, to a prosperous rural village squeezed between two hill ranges. To the west were the Kilpatricks, to the east, perhaps the most impressive face of the Campsies. In every direction there was promise for outdoor enthusiasts. I was a regular on the Strathblane bus. It was my escape to adventure.

In 1933, the prolific travel writer Ian C Lees wrote that ‘The rich valley of the Blane… is the finest place for trampers within easy reach of Glasgow.’  It was true then; it was true in the 1980s and it is true now. And I wish we still used the word ‘tramper’. Today, though, it is perhaps easier to find peace and quiet there than in the 1930s, as the real enthusiasts hurtle north in their cars to Glencoe, the Trossachs or Arrochar.

A word about names. Blanefield (the ultimate destination of that bus from Kirkintilloch) and Strathblane are conjoined villages that straddle the A81 between Aberfoyle and Glasgow. Strathblane is the village; the valley is Strath Blane, drained by the Blane Water, a river that finally runs via the Endrick into Loch Lomond.

At the heart of Strathblane, where the A891 joins the A81, is the Kirkhouse Inn. It is said to date from the 17th century and happily has survived Covid. When the Kirkhouse was new, Strathblane, protected by a belt of high ground to the south, must have felt especially remote. However, in the 1860s the arrival of the railway brought the village into the Glasgow commuter belt.  Owing to that high ground to the south, the trains arrived circuitously, via Kirkintilloch and Lennoxtown, and the line eventually extended to Balfron and Aberfoyle. The railway lost its passenger service in 1951 and was closed completely in 1959 (our bus from Kirkintilloch, now also gone, originated as its partial replacement). But, as we will see, it’s still an important travel route today.

Just north of Strathblane/Blanefield is Duntreath Castle, the home of the Edmonstone family who remain significant landowners here. The castle is private though its gardens are sometimes open to the public. In 1909 crowds flocked to Blanefield Station when King Edward VII arrived there for a visit to Duntreath. He was greeted by Sir Archibald Edmonstone of Duntreath and the Duke of Montrose. Crowds also turned out to see the King when he attended Strathblane Parish Church on the Sunday. Edward had visited Duntreath before, when he was Prince of Wales. There’s speculation that he may have made other, more clandestine visits; Mrs Alice Keppel, with whom he had a long affair, was Sir Archibald’s sister. Duntreath had its own small railway siding, and it has been suggested that Edward travelled on ordinary service trains and had them stop here so that he could make secret visits to Mrs Keppel at her birthplace. I am sceptical about this; the king, travelling on a humble local train that stops unexpectedly in the middle of nowhere so that he can hurry away? That would surely attract attention, not avoid it?

Nowadays the trackbed of the railway east of the village is a walking and cycle path that runs all the way to Kirkintilloch while the West Highland Way also follows the railway north-west through Strath Blane. The John Muir Way uses the path from Kirkintilloch to Strathblane and then climbs up to Mugdock before continuing through the Kilpatrick Hills. These routes all help to make Strathblane an outdoor paradise. Mugdock is also home to a much-loved country park. And then there’s The Pipe Track.

Feels remote, even though it is not

The Pipe Track begins as a quiet suburban drive, climbing steeply from Strathblane’s War Memorial. A couple of hours on the track, with spectacular views ahead to the hills around Loch Lomond, will take you to the village of Killearn, from where you can take a bus back to Strathblane. But on the walk you will notice some odd stone towers and bridges. These are associated with the Loch Katrine Aqueduct which takes sweet fresh water from the Trossachs to reservoirs at Milngavie. This astonishing civil engineering project was carried out in the 1850s with the intention of providing Glasgow with clean water. Today, with an extension dating from the 1870s, it still does. The Pipe Track was originally a service road for the building of the aqueduct.

The farm of Blairquhosh, just beyond Blanefield, was famous in the early days of Scottish tourism for its Muckle Tree – sadly no longer with us except as a sad roadside stump. Further on is a current tourist draw, the Glengoyne Distillery, famous for its single malts. It is a picturesque facility with the peak of Dumgoyne towering above. Many visitors must think they are in the Highlands. The B10 bus serves Glengoyne from Glasgow and Strathblane and you can walk there using either the West Highland Way or the Pipe Track.

Returning to Strathblane’s War Memorial, just across the road are some rows of cottages that were built for people who worked in a massive now vanished calico works that once dominated the area. In 1941, during the Second World War, two landmines fell on the village. The Clydeside Blitz was raging, and it is probable that the German bombers were simply shedding their loads before heading for home. One of the landmines landed just across the road from the war memorial and destroyed a block called ‘Sunnyside’. Four people were killed, including a mother and her two children who had been evacuated from Clydebank to avoid air raids. A plaque near the parish church commemorates the tragedy.

The Campsies are the dominating feature of Strathblane, with the pointy green alp of Dumgoyne and the mighty crags of Slackdhu. If Slackdhu seems familiar, it may be because you are a Monty Python fan. They stood in for South Africa in the Zulu sequence of Monty Python’s Meaning of Life. You would not ever really mistake Strathblane for the veldt. Yet it feels remote, even though it is not.