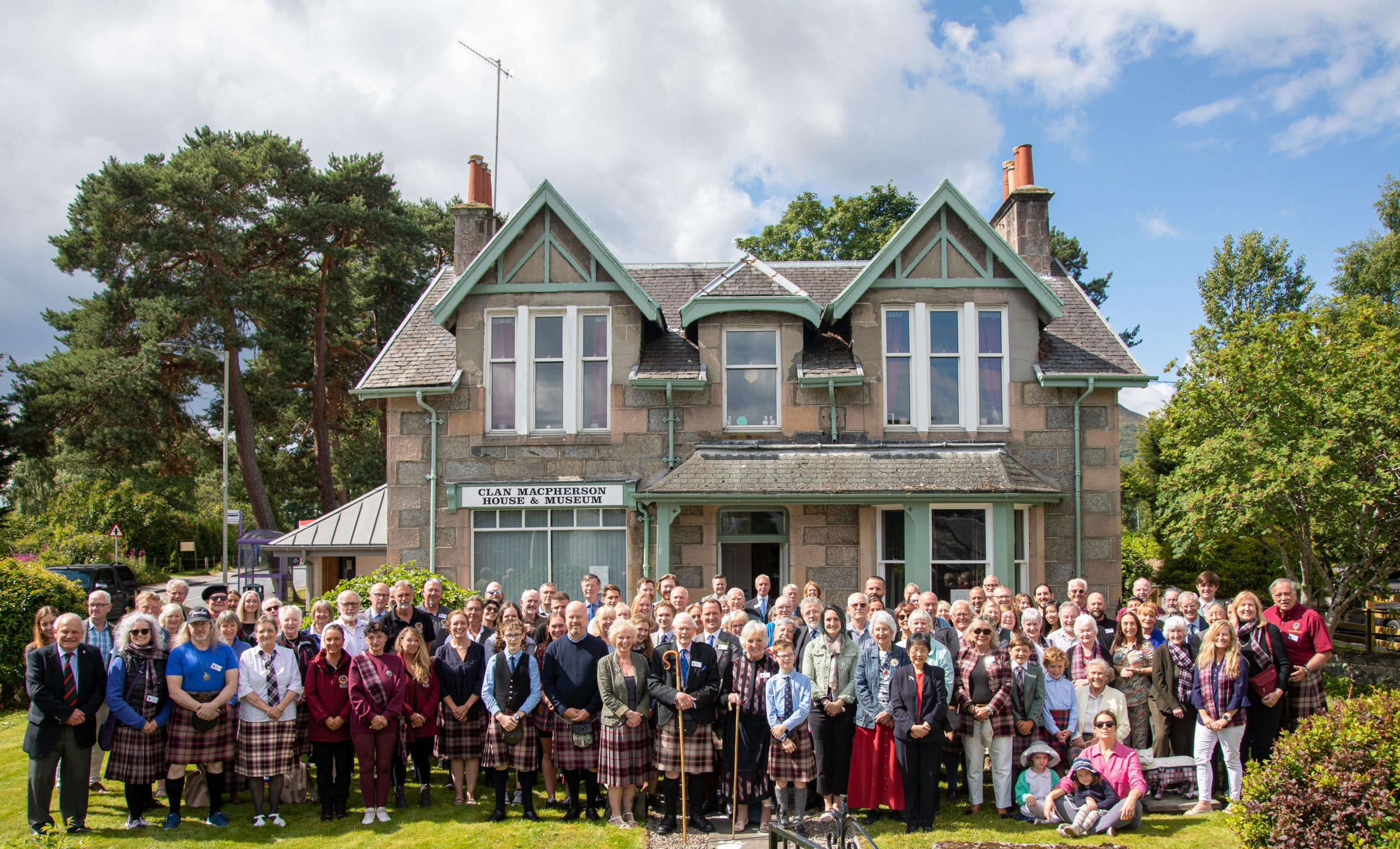 On Friday 5th August 2022, as part of the 75th Annual Clan Macpherson Gathering, Clan Chief James Brodie Macpherson of Cluny and Blairgowrie invited a group of approximately 190 clansmen and women to ‘raise a glass’ to the future prosperity of the Clan Macpherson Museum as the latest chapter in the Museum’s illustrious history was written.   The Clan Macpherson Museum was opened in 1952 by the Chief’s grandmother. Unique then, the first ever clan museum in Scotland, it comprised just two rooms housing artefacts rescued from Cluny Castle following the sale of the estates in 1943,  Subsequently, the Museum has undergone two extensions. Most recently it has benefitted from a new roof and internal reconstruction of the displays. Over the years, the collection has expanded with acquisitions and donations, while the way the collection has been presented has also changed, whether in reality or virtually.

An exciting innovation was the development of the Electronic Museum, presenting artefacts to those unable to visit the Museum. Future plans propose a new and interactive website, harnessing the best to match ambitions. In 2007, the Museum was awarded Visit Scotland’s four-star rating, an accolade proudly retained to this day, as well as a long-standing formal Accreditation by Museums Scotland.  Emerging from COVID 19 quarantine like a butterfly, the Museum abounds with colour and light, through interconnected galleries taking the visitor through different chapters of Clan history.  Familiar and traditional themes are presented to capture the imagination, and to inform and delight. In addition, a theatre area is provided, as well as a dedicated space for children, and an expanded shopping area which will focus on the work of local artists.

The Museum’s new Curator, Aila Schafer, is working to forge new and lasting relationships across the local and wider communities and building a network of volunteers to help manage the Museum. Since her arrival in April, she has been pleased to welcome many visitors to the Museum, some of whom have not visited in years. Over seventy years, many people have been, and continue to be involved in creating and maintaining the Museum. Funding bodies and government agencies from whom grants have been received, Friends and Guardians of the Museum, generous visitors, people from afar who have raised money, office bearers and committee members. And not just Macphersons – members of the local community and people much further afield have helped.

The Chief went on to commend Ewen SL MacPherson’s newly published and highly recommended book, The Clan Macpherson: Trials, Triumphs & Treasures, wherein reference is made to the Museum as a jewel in the Crown of Scotland.  The Chief concluded, “Clansmen and women, the people of Badenoch … friends and supporters of the Museum – as your Chief, I invite you to raise a glass to those that had the foresight to set up the Museum 70 years ago and those, donors, public agencies and contributors of time, energy and imagination, who have enabled it to reach this, the next stage of its development – Newtonmore’s Clan Macpherson Museum, reborn and reinvigorated, a jewel in the Crown of Scotland: the Museum.”