The bond of dogs

This year marks the 150th anniversary of the death of Scotland’s most famous dog, Greyfriars Bobby. For those unfamiliar with the story of Bobby, he was the loyal Edinburgh dog who stood vigil at his master’s grave, night watchman John Grey, in Greyfriars Kirkyard long after his death.

As news of his devotion spread around Edinburgh, Bobby was eventually adopted by the city and the lord provost, as ownerless dogs could be destroyed in the capital. The provost paid for Bobby’s dog licence and gave him a leather collar with a brass plaque inscribed, ‘Greyfriars Bobby From the Lord Provost 1867’.

When Bobby did pass away in 1872, 14 years after his beloved master, he would be buried also at the city’s iconic Greyfriars Kirkyard. Bobby was so loved by the people of Edinburgh
that a statue was erected to him at Candlemaker Row. Today the statue is still one of the most popular in the city and books and films have been made about Bobby, not to mention he can be found on tea towels, magnets, mugs and more.

Perhaps the famous statue of Bobby may need to be revised as the history books have always referred to Bobby as a Skye Terrier, however new research has emerged that Bobby may in fact have been a Dandie Dinmont terrier. This fashionable breed at the time originated in the Scottish Borders and was popular across Scotland, especially in Edinburgh. Interestingly the Dandie Dinmont is the only dog to have its own official tartan. Duke Richard of Buccleuch, the Chief of Clan Scott approved for the Dandie Dinmont Terrier to wear the striking Sir Walter Scott Black and White Tartan. It was Sir Walter Scott’s book Guy Mannering, which featured a farmer named Dandie Dinmont and his terriers Mustard and Pepper, giving the breed its unique name.

Mary Queen of Scots lived a tragic and short life, but dogs were very much part of her time on earth. Mary had numerous dogs, including when she was in captivity, and they remained her trusted companions throughout her life. As Mary was executed, she apparently had a Skye terrier hidden in her dress. When she was beheaded, her dress began to move, and like Bobby, her dog refused to leave her limp body.

Going even further back in history, researchers a few years back uncovered dog skeletons in a Neolithic Cairn Chamber in Orkney. Thought to be 4,500 years old the discovery showed how important dogs were regarded to be placed in a burial chamber. Those early Orkney communities would have used dogs to work the farm, as protectors and of course friends.

The sound of the pipes and drums has certainly been heard much more around the world recently with the return of Scottish events across the globe. Nowhere more so than at last month’s World Pipe Band Championships held in Glasgow. It was so great to see so many bands come together at this iconic event which, like so many others, has not been able to take place during the peak of the pandemic. Pipe bands are so important to Scottish culture across the world and regardless of your background an important part of the global music scene. Also back was the Royal Edinburgh Military Tattoo, one of the greatest shows on earth and back with a bang. I know of several readers who were lucky enough to be attending these this year and I hope to be back myself for these incredible Scottish events soon.

An exciting exhibition of portraits depicting the Royal House of Stuart in exile is now on display at Fort William. The exhibition will feature paintings never displayed together in Scotland before, and some that have never been exhibited anywhere, and include four generations of the Royal House of Stuart. The paintings illustrate the deposed Royal Stuart dynasty, who motivated the Jacobite clans in their attempts to restore them to the throne of Scotland during the Jacobite rising in 1745. 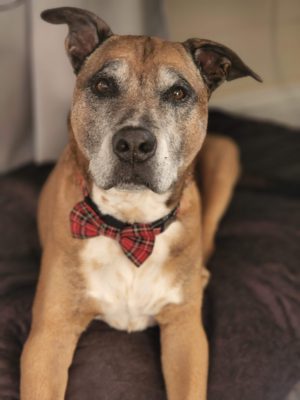 They say that dogs are ‘man’s best friend’ and I certainly cannot dispute that fact. I have grown up around dogs and they have been part of my family life. I may have been ahead of the trend, but back in the 1970s I started my very own dog walking service. Walking local dogs for pocket money after school, I loved it, and my dog bond has never been broken.

Today under my desk in my office sits a doghouse for my dog Fergus. Fergus is an 11-year-old American Staffy (Staffordshire Terrier)-(Rhodesian) Ridgeback cross and brings my household insurmountable joy. Fergus no doubt has played his role in keeping me calm under stress and deadlines and played his very own part in helping me keep the Scottish Banner thriving. He is in fact named after the town of Fergus and the Fergus Scottish Festival and Highland Games in Ontario, Canada, an event I have attended for over twenty years and grew up with. Since I was a child, I have said I will one day have a dog called Fergus.

Like so many do with their pets, I treasure my connection with Fergus and whether you are a dog, cat, bird, horse (or maybe even something more exotic) person, I hope you have had the opportunity to feel the joy of an animal connection. For me my tail has not stopped wagging since Fergus arrived, and for that I feel so very lucky.

Do you have/had a special pet in your family? Do you have you any comments from the content in this month’s edition? Share your story with us by email, post, social media or at: www.scottishbanner.com/contact-us

The Scottish Banner is more reliant than ever on our readers helping us to provide you with our unique content by buying a copy of our publication, regardless if by print or digital subscription or at a retail outlet.
We appreciate your support and hope you enjoy this edition.