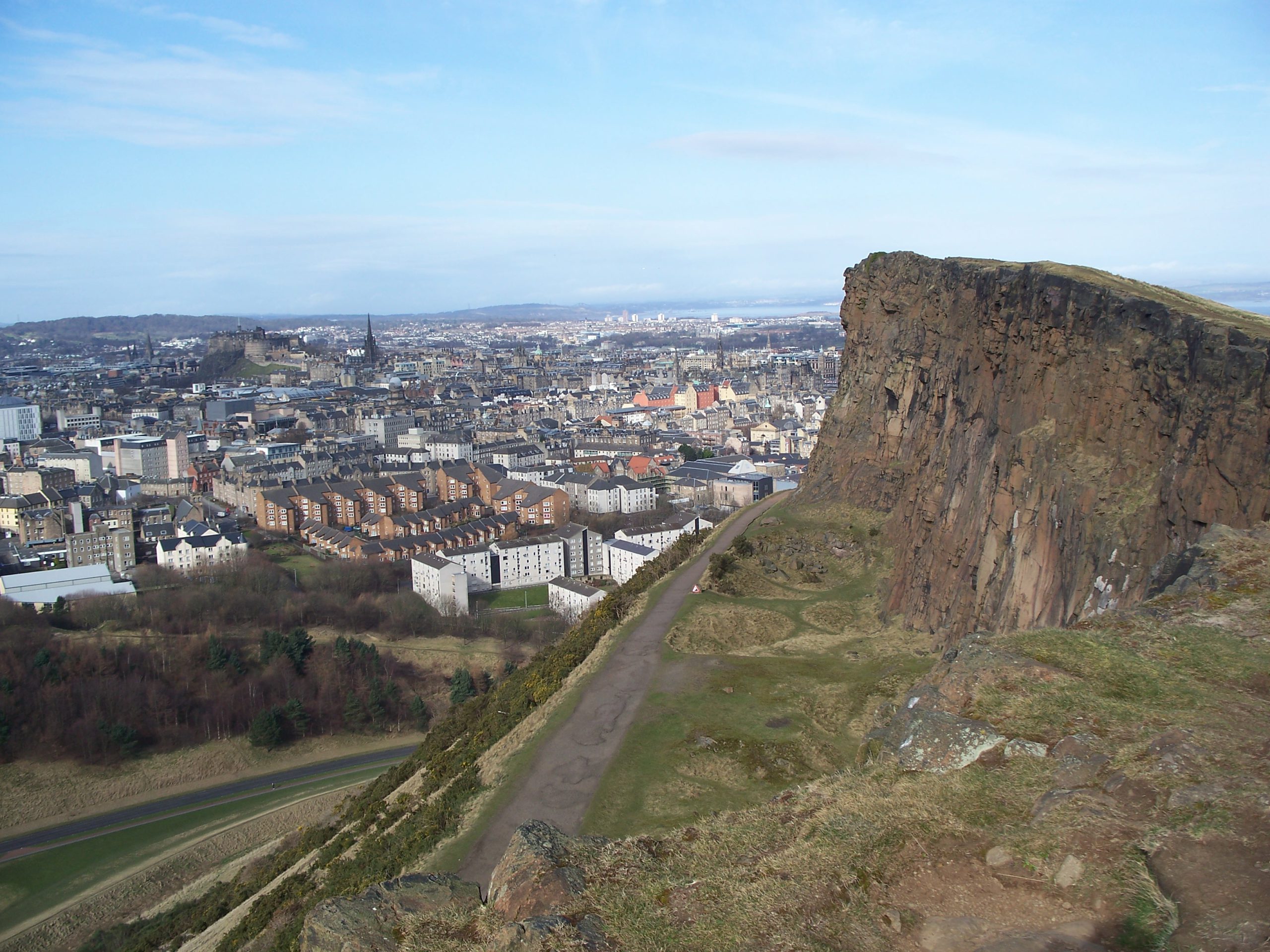 Text and images by: David McVey

When someone from Glasgow tells you something good about Edinburgh, it must be really good. And there’s no denying that the hills of Edinburgh are very special. Popular tradition gives Edinburgh, like Rome, seven hills;

Some of the hills are now mostly urban: Castle Rock has the world-famous castle on top, and while Calton Hill has plenty of open space, it’s also home to several tourist attractions, including the unfinished National Monument. Its summit has a breath-taking view along Princes Street towards the castle, a glorious cityscape – although Glaswegians like me will tell you the University of Glasgow seen from Kelvingrove Park is even better.

The celebrated Arthur’s Seat is actually one of several peaks within the miniature range of hills that is Holyrood Park. It’s a glorious place, about a mile square with its own summits, lochs, glens, crags, ridges and small burns. Arthurs Seat (251m/822ft) is always busy but other parts of the park are less so. Salisbury Crags is the rampart of cliffs that guards Arthur’s Seat from the city centre. A walk along the edge of the crags – keeping an eye on any children in the party – on well-beaten paths is a marvellous experience. The highest point of the crags (174m/570ft) is a summit in itself and is always less busy than Arthur’s Seat.

Other summits in Holyrood Park include Whinny Hill (177m/583ft) and the two peaks nearest to Arthur’s Seat, the bouldery Crow Hill (238m/780ft) and Nether Hill (237m/779ft). Keen walkers could spend an enjoyable half-day bagging the tops, and everywhere there are echoes of history. If you enjoyed your visit to Arthur’s Seat, so did Burns, Scott and Stevenson. James Hogg set a terrifying episode of The Private Memoirs and Confessions of a Justified Sinner on the summit.

A name and a history

Every bump and hollow and corner in these hills has a name and a history: what about the Galloping Glen, the Gutted Haddie, Hunter’s Bog and Haggis Knowe? Hunter’s Bog is the glen enclosed by Arthur’s Seat and the Salisbury Crags. On the orders of Mary Queen of Scots, it was once dammed to create a small loch. Later it was drained but is now becoming boggier again and there is often open water there; I’ve seen a heron fishing in the shallows.

There are many ways to the summit of Arthur’s Seat: a favourite of mine is by the Lang Rig, an airy ridge thought to be the remains of a lava flow. From Hawse, the pass between Arthur’s Seat and the Salisbury Crags, you can take a lung-bursting zig-zag path up the hollow known as the Gutted Haddie. You emerge on a plateau just below the hill’s rocky crown. A longer route from Hawse follows the Piper’s Walk, which runs through some of the woodland above Hunter’s Bog and deposits you at the top of the Lang Rig route to the summit. The slopes between Hunter’s Bog and the Piper’s Walk are surprisingly wooded, adding to the park’s biodiversity.

Watch as you move around the summit of Arthur’s Seat; the rock outcrops are shiny and slippery with the passage of many feet. It isn’t a place for quiet contemplation as thousands reach the top on a good day. But then, Holyrood Park has a long history of human occupation. There’s evidence that people lived in the park area as long ago as 8000 BC. Some features traceable on the ground, including four hill forts, probably date back as far as the Iron Age.

A great bite has been taken out of the Salisbury Crags at their south-eastern end by quarrying. It was in this quarried section that the pioneering geologist James Hutton found evidence that enabled him to demonstrate the volcanic origin of the rock, preparing him for his seminal work Theory of the Earth which appeared between 1785 and 1799. Part of the quarried area is still known as Hutton’s Section.

Nowadays the park is managed by Historic Scotland and is an island of nature in the city, yet it’s amazing that any creatures live here given the sheer mass of humanity that sometimes crowds in. During the 1745 Jacobite Rising, Charles Edward Stuart’s army camped in the park and exercised in Hunter’s Bog. Exactly 200 years ago, the visit of George IV to Edinburgh was commemorated by cannon fire from Salisbury Crags and a bonfire and musketry on Arthur’s Seat. An estimated 200,000 people crowded onto the high ground to watch Queen Victoria review volunteer troops in the park in 1860.

The track that runs along the foot of the Salisbury Crags is known as the Radical Road. It was built by unemployed weavers under a pioneering welfare-to-work scheme in 1820, and its name comes from the weavers’ reputation for being in the vanguard of campaigns for social and political justice. Sadly, it is currently closed and fenced off owing to recent rockfalls. This is a shame as it’s a fine walk in itself; I understand that Historic Scotland need to care for visitors but surely crags are always going to be prone to this?

Holyrood Park’s peaks, like all of Edinburgh’s hills, are eastern outliers of the Pentlands which start tumbling to sea level on the outskirts of Edinburgh. If you take Edinburgh’s No. 4 bus to its terminus (the appropriately named Hillend) you’ll find yourself at the home of Edinburgh’s own ski resort, the Midlothian Snowsports Centre. From these slopes, the hills of Edinburgh, even Arthur’s Seat, begin to look a little modest.

But nothing can take away the magic of Holyrood Park’s magnificent square mile.