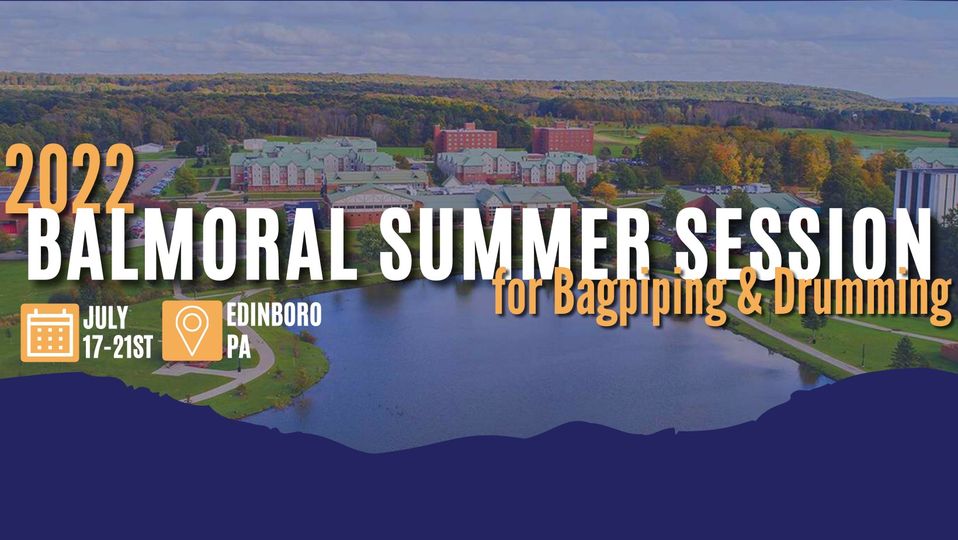 Balmoral returns to its roots, hosting 2022’s summer camp at the university campus in Edinboro, Pennsylvania! July 17-21, join pipers and drummers from around the world for classes in an intimate setting, or register to sit-in on classes via Zoom. The week will include instruction and performances by some of the world’s leading educators and performers, with opportunities for both individual and group instruction as well as camp-wide activities suitable for all ages and ability levels.

Guest instructors for 2022 include: Roddy MacLeod, MBE, of Glasgow, Scotland, who won his first Gold Medal at the Northern Meeting in 1986, Argyllshire Gathering Gold Medal in 1988. He is a 10-time winner of the Piobaireachd at the Glenfiddich Solo Piping Championship and has won the overall title five times. While Pipe Major of the Scottish Power Pipe Band, he led it to over 45 Grade 1 Championship prizes including the Cowal Championships and All Ireland Championships. He was Principal of The National Piping Centre from 1996 -2020.

Originally from Northern Ireland, now a resident of Pittsburgh, Andrew Carlisle who has won numerous top awards: A Grade Strathspey and Reel at Oban, the A Grade Piobaireachd & Overall at The Cowal Highland Gathering, US Gold Medals for both Light Music & Piobaireachd, and three All-Ireland titles at Senior level. He’s 3-time winner of the Macallan Trophy at Lorient, Brittany, France. Andrew holds the prestigious positions of Professor of Music and Director of Piping at Carnegie Mellon University.

Terry Tully, of Dublin, Ireland, who is one of the most influential composers of bagpipe music in Ireland and a former Pipe Major of St. Laurence O’Toole Pipe Band. Under Tully’s leadership, SLOT was the first pipe band from the Republic of Ireland to win the Grade One World Championship, also winning prizes in Ireland, as well as the Scottish and British 2008 Championships. Tully has performed with the Chieftains at Carnegie Hall and has appeared on three of the band’s albums.

All aspects of Highland Piping

Balmoral Staff Instructors include: Snare drumming instructor Ian McLeod and Bagpipers; George Balderose, Richmond Johnston and Sean Patrick Regan. Executive Director and Co-Founder of the Balmoral School George Balderose says: “The 2022 Balmoral Summer programs have a variety of offerings from professionals in the field that cover all aspects of Highland Piping, from beginning to advanced pipers and drummers, including a course on playing the pipes in ensembles with other types of instruments.”

Registration is currently open and will close July 5th, 2022. Join in person in Edinboro, PA or online. For more information or to register, please visit: www.bagpiping.org