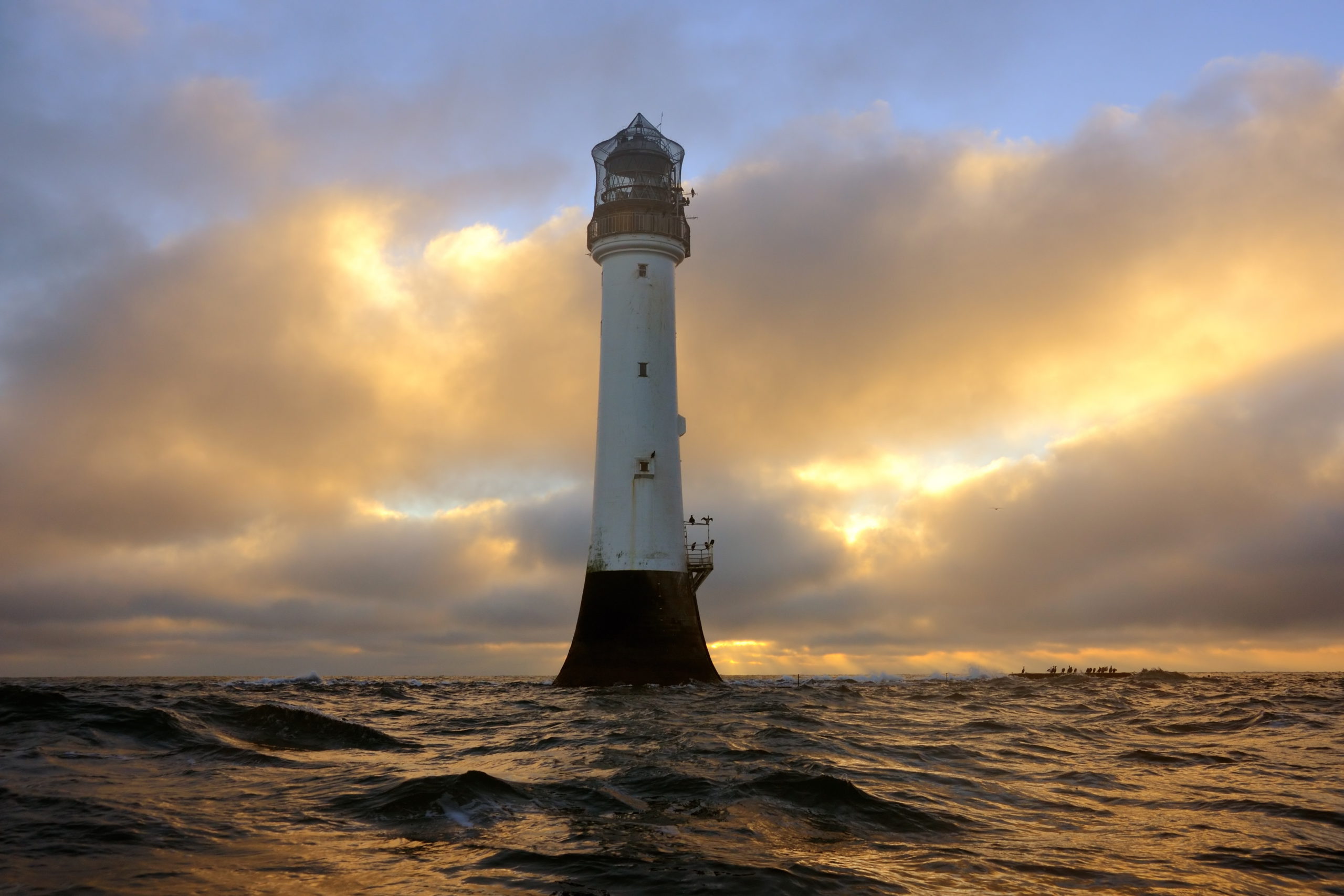 This month marks the 250th anniversary of the birth of Robert Stevenson’s birth on June 8th.  Stevenson was famous for designing and building many of Scotland’s lighthouses for the Northern Lighthouse Board (NLB) between 1794 and 1833. The last principal lighthouse keeper shares some of his unique memories of being on Robert Stevenson’s most famous lighthouse, as Nick Drainey explains.

“I liked the Bell but looking back I often think I must have been a bit of a nutcase,” says John Boath, the last Principal Lighthouse Keeper of the Bell Rock and the last person to turn off the light before it was automated. This year marks the 250th anniversary of the birth of its designer Robert Stevenson. Many say it is his finest work and it has been called one of the seven wonders of the industrial world. John Boath has another name for the 35 metre (115ft) tower 11 miles off the coast of Angus; he calls it a “vertical submarine”.

It was tough on the Bell Rock, even for someone who had nearly two decades of experience as a lighthouse keeper. John, who first arrived at the Bell Rock in 1983, said not many fellow keepers would relish a posting to the Bell Rock. “The Bell Rock was a totally different environment. If anybody got the Bell Rock it was usually followed by an expression of ‘oh no!’ because it had such a reputation.”

They worked four weeks on four weeks off. No running water meant no baths, and washing was kept to a minimum to save water. John adds: “You had a sponge down – water had to come in by ship in barrels so you had to be cautious with it. We didn’t have hot water – you had to boil a kettle and wash yourself down with a cloth.” John adds: “These lighthouses are pillars on rocks where you were basically inside for your four weeks, you didn’t get out. You can only get on it at an ebb tide. The rest of the time it is completely surrounded by water.”

And if the weather was bad when it was time to get off, you could be stuck on it for longer. “If we couldn’t get off the ship would go and anchor in St Andrews Bay to try on the next tide. They would probably try for about three or four tides and then the relief would be cancelled. Hopefully they would comeback in another two weeks. All lighthouses would carry an emergency food kit; corned beef and stuff like that.” Usual provisions which were sent on the same boat as the keepers included fresh vegetables and fruit but could best be described as basic. John says: “I used to take a bar of Cadbury’s and have one square a night.” There were some upsides: “At the top it is all glass and I used to go up there and sit and read. I used to have a deckchair and I could look out at the sea, it was all peaceful.”

Stevenson didn’t like ill-discipline and that was where the rules lighthouse keepers had to follow from then until John’s time came from. John says: “When Stevenson had built the Bell, some of the people who first manned it where people who had worked on the building of it – they were rough diamonds. Stevenson seemingly didn’t like this and brought in regulations with uniform and discipline. You needed regulations. When Commissioners came round they used to wear white gloves and when they walked around they would wipe their fingers (over surfaces) to find dirt. I was a bit of a rebel but you accepted it.”

Away from the regulations, the longevity of the Bell Rock Lighthouse is all the proof John Boath needs that Robert Stevenson should be recognised for an amazing feat of engineering. “It speaks for itself, the fact it has been standing all these years.” It is the world’s oldest working sea-washed lighthouse. The long and treacherous reef on which it stands is close to shipping lanes for vessels plying the east coast and using the Firths of Tay and Forth.

But Stevenson himself talked of a navigation history going much further back than the 19th century, and perhaps one that gave the rock its name. While an engineer to the Northern Lighthouse Board, he wrote: “There is a tradition that an Abbot of Aberbrothock directed a bell to be erected on the Rock, so connected with a floating apparatus, that the winds and sea acted upon it, and tolled the bell, thus giving warning to the mariner of his approaching danger. Upon similar authority, the bell, it is said, was afterwards carried off by pirates, and the humane intentions of the Abbot thus frustrated.”

Mike Bullock, chief executive of the Northern Lighthouse Board, believes Robert Stevenson would have embraced automation, but he also praised the work of keepers like John. He said: “The departure of keepers was a poignant milestone and the end of an era. This unique profession wasn’t just a job, it was a way of life and for John Boath and for many others, automation marked the end of a long career. But as reliable technology became available to protect those at sea, automation was inevitable and if the great innovator Robert Stevenson could have automated lights from the outset, I am pretty sure he would have done so.”

And the legacy from Stevenson’s day lives on, according to Mr Bullock, who said the “role of the Light Keeper is never far from our minds”. He added: “For over 200 years they kept the lights shining and saved countless lives at sea. Their legacy lives on and I’d like to think we are seen as the modern-day custodians, looking after these wonderful structures for the next generation, keeping mariners safe and helping protect our precious marine environment from environmental damage.”

John Boath was the last man to turn off the light on Bell Rock before it was automated in 1988. “I just happened to be on watch that morning and switched it off. It was quite emotional. I had enjoyed my time at the Bell and I was very sad to leave.”