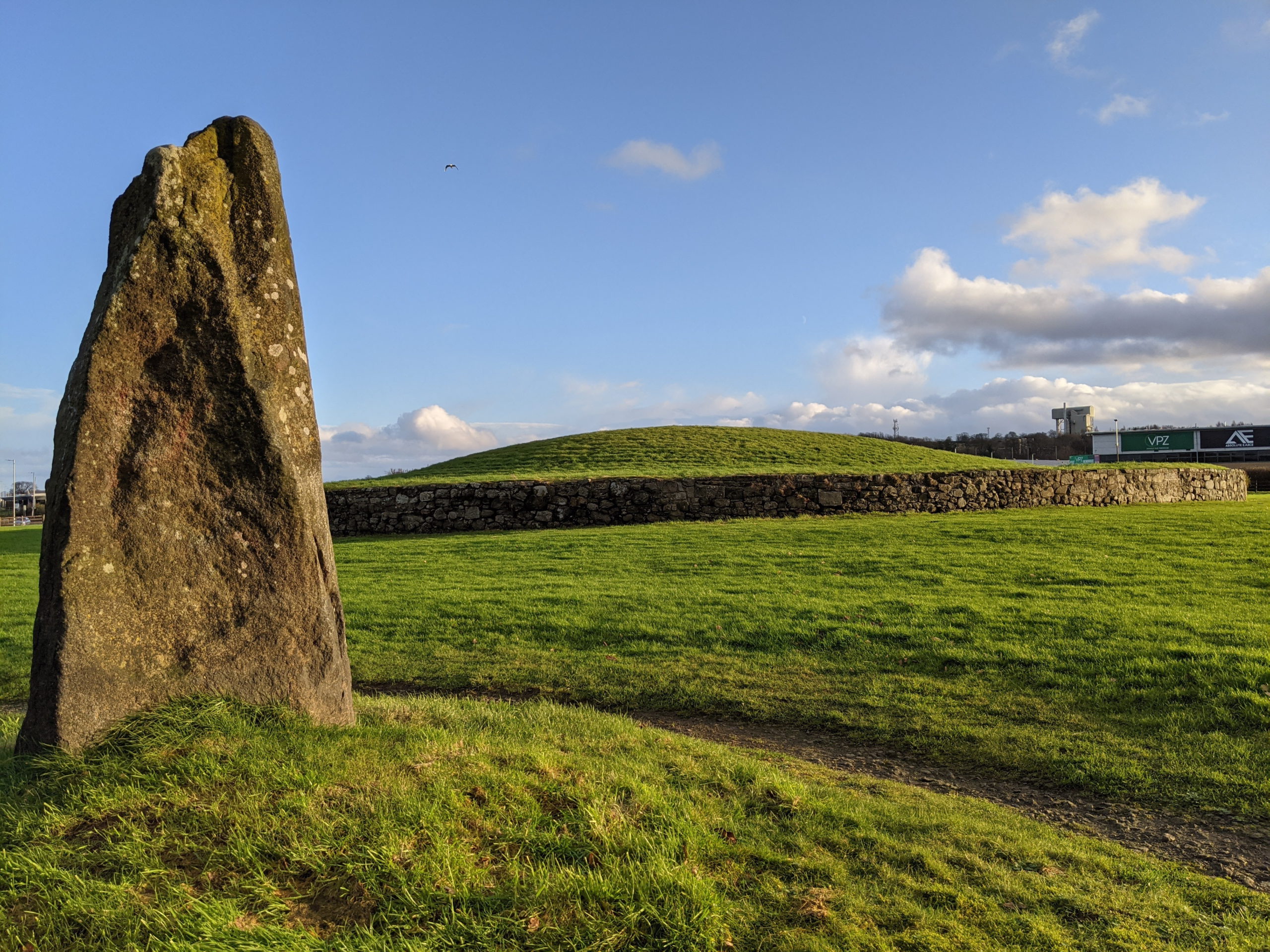 In the west of Edinburgh sits the almost forgotten prehistoric monument, Huly Hill Cairn. Today this historic site sits amongst a modern capital city.  How should historic sites dating back thousands of years be viewed in our modern world?  David C. Weinczok poses the question, did ancient people really intend for their monuments to last forever?

The historic centre of gravity in the Old and New Towns of Edinburgh pulls so strongly that many extraordinary places on the city’s fringes are effectively invisible to all but the most dedicated seekers. There are standing stones in suburban hedges, Roman forts alongside crowded beaches, and medieval towers absorbed within college campuses. Of all the wonders of Edinburgh’s fringes, none are as strikingly strange as Huly Hill. Wedged between a massive roundabout, a McDonald’s, and a go-cart track while also directly under the flight path of departures from Edinburgh Airport, there is no guidebook for Huly Hill.

If it were located anywhere else, it would be a tourist draw on par with the ancient monuments of Kilmartin Glen or Orkney.

The historic landscape of Huly Hill

Huly Hill consists of a large 3,500-year-old burial cairn, now sealed shut, thirty metres in diameter rising to three metres high. It is triangulated within a trio of tall standing stones which were once possibly part of two separate concentric stone circles. A large motorway separates these stones and the cairn from an outlying standing stone, all of which were part of a large, continuous megalithic site.  A major discovery was made just south of Huly Hill in March 2001 during the building of an industrial estate. The remains of a chariot built between 475-380BC were unearthed, the only known chariot burial in Scotland and the oldest example in all of Britain. Known as the Newbridge Chariot, it testifies to the use of the area for burials and associated rituals over a period of several thousand years.

Beyond its archaeological significance, Huly Hill and the thoroughly modernised landscape of Newbridge raise essential questions about permanence and continuity. Sitting at the foot of one of the standing stones as planes fly overhead, freight trucks refuel, and Big Macs are doled out of drive-through windows, you can’t help but reflect on change.

When we build things, it is taboo to think about their inevitable destruction. Construction is a possessive process, reflected in the language we use around historic sites. Castles, stone circles, soaring tenements and other monumental undertakings are described as ‘imposing’ and ‘dominating’ themselves over their surrounds. The language of buildings’ life cycles insinuates this, too – a structure is said to be ‘in decline’ or ‘ruinous’, suggesting a move away from its original intent, function, and worth.

The idea that the endurance of the things we build, and therefore our tangible legacies, will be subsumed by circumstances beyond our control strikes us on an existential level. Was it always so?

Permanent sedentarism is a relatively new feature of human life, so there is good reason to believe that our monuments were not always built as everlasting testaments to our place in the landscape. The people who made Huly Hill Cairn and the megaliths that surround it were permanently settled agriculturalists, yet their relationship to an ever-changing landscape and climate was arguably quite different – and certainly newer in collective memory – than our own. How shocked would they be by Huly Hill’s modern environs? Perhaps less than we assume.

Example of creation through destruction

Across Scotland, there is ample evidence of ancient monuments of the kind that we imagine were meant to last forever being fundamentally altered. Tealing Earth House is an Iron Age subterranean passage known as a ‘souterrain’ located between Dundee and Forfar. Around 2,000 years ago, someone saw fit to place a stone bearing cup and ring-style rock art at its entrance. The rock art was carved between 4,000 and 2,500 BC, meaning it was older to the builders of the souterrain than they are to us. The deliberate removal and repurposing of it tells us that the leavings of the past were regularly being adapted into the present.

Duddingston Loch, also in Edinburgh, was the scene of a tremendous Bronze Age offering. In its waters were deposited the deliberately broken fragments of swords, spears, and other metal objects between 1,000-800BC. Research into Bronze Age hoards by Dr Matt Knight, Senior Curator of Prehistory at National Museums Scotland, indicates that the breaking of these objects would have required considerable time, effort, and resources, suggesting a sacrificial and highly symbolic motive.  In a time when bronze objects were the ultimate status symbol, their breaking and offering to the loch’s waters can be interpreted as a creative act. Far from being ‘destroyed’, they attained a new significance and function after being broken. We may see such an act as a disposal, after which the objects became passive rather than active parts of the society that created them, but there is no reason to believe that Duddingston’s Bronze Age residents saw it that way.

In the Orcadian isle of Wyre, a 12th century Norseman named Kolbein Hruga built his stone castle within the ruins of a broch which predated him by a millennium. Not far away in the chambered cairns of Rousay, which are not entirely unlike Huly Hill, the interring of bodies within them was a cyclical affair. The dead were regularly moved around, replaced, and removed altogether, suggesting that remembrance of individuals lasted only as long as the survival of those directly connected to them.  Speaking of the famous Ring of Brodgar, another Orkney monument that changed substantively over many centuries, Mark Edmonds suggests in his book Orcadia that, “…duration may not have always been that important to Neolithic people. Some things were built for the time, not for all time.”

Change as a feature, not a flaw

A common assumption of both residents of and visitors to Scotland is that many features of our natural and built landscapes ‘always’ looked as they do now. At site after site, however, we see that change rather than perfect continuity is the defining feature of the passage of time. When in such places, I often wonder what the people who created them would think of what has become of them. Would they be comforted by the knowledge that their homes and tombs are still subjects of awe thousands of years later? Or would they be aghast that the place where their ancestors were interred are now, as Huly Hill is, surrounded by noise, fumes, busy thoroughfares and uncaring passers-by?

Putting aside the obvious shock at the technological differences between the ages, the more I learn about places like Huly Hill and prehistoric peoples the more I suspect their reaction would be somewhat different. “Are those things still around?” they might ask. “Don’t you think it’s time to find somewhere new? Have you really just let it sit there for all those years, frozen in preservation? That’s perfectly good stone you could be using!”

Still, on some fundamental level there is continuity here. Huly Hill remains a place to dwell on the passing of time and our fleeting place in it. It is still a monumental work, even if our relationship to such monuments would be unrecognisable or baffling to their creators. Amid a maelstrom of motor vehicles, air traffic and commercial transactions, there is still a reflective calm to the place.  Some things change, some things stay the same – I like to think that the people who broke the first earth and placed the first stone at Huly Hill would have it no other way.