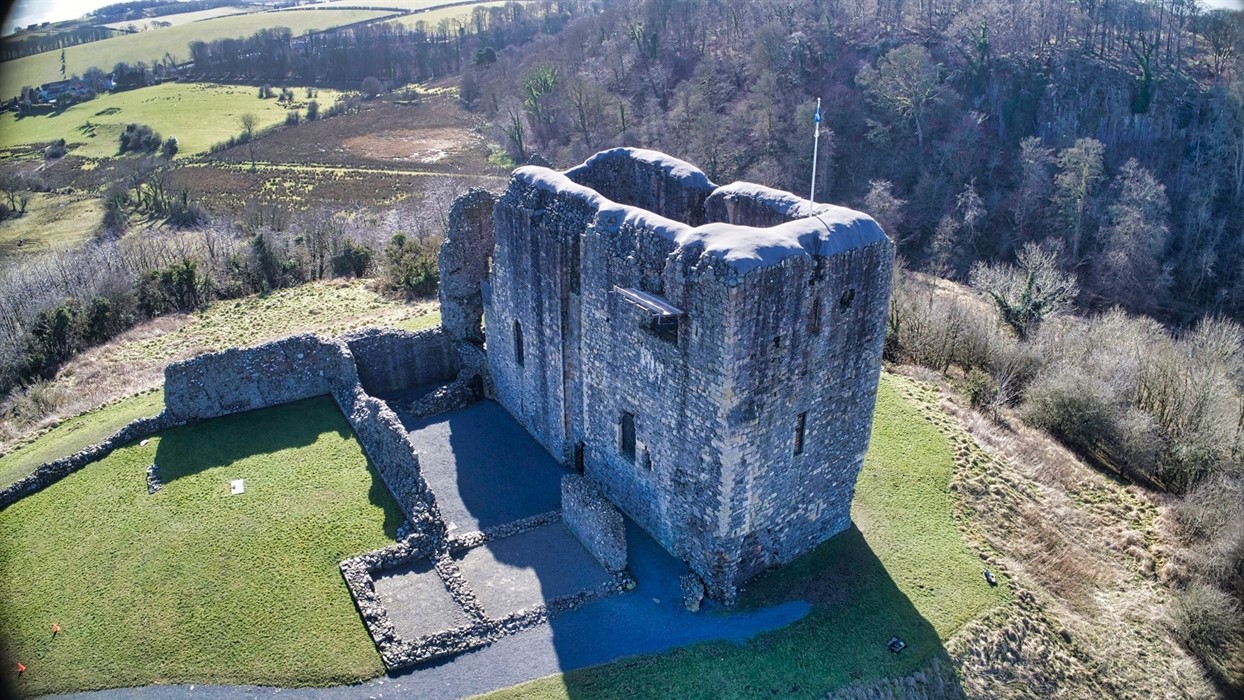 In 2014 BBC 2 ran a three-part documentary entitled The Stuarts, presented by Dr Clare Jackson of the University of Cambridge. The series began with James VI and 1, meaning that over 200 years of monarchical history were omitted, as if the Stuarts only became interesting when their dynasty took over the English throne. In fact, the Stuarts – or Stewarts – presided over colourful times when they ruled Scotland alone. And it all began at Dundonald Castle in Ayrshire.

The site of Dundonald Castle has a long history. There was probably an Iron Age settlement on the hilltop and the obvious defensive qualities of the steep, rocky hill were continued when a motte and bailey structure occupied the site. The present structure was built around a 13th century tower which may have been the gatehouse of an earlier version of the castle.

The castle belonged to the Stewarts, the hereditary High Stewards of the kings of Scotland who became a royal dynasty themselves. Their first monarch was Robert the Steward, who became Robert II in 1371 at 55. Only four years earlier he had been a prisoner in Lochleven Castle, as would his descendent Mary Queen of Scots 200 years later. He lived at Dundonald and is believed to have improved and enhanced the building in the 1350s. The intent was not, it’s believed, defensive, but rather just to impress. As you approach the castle on the steep path from the Visitor Centre you can only imagine that he succeeded; your view of the castle emerges in an imposing way.

Robert II died at Dundonald in 1390 and his successor, Robert III was also associated with the castle. In fact, it’s possible he also died in his bed here in 1406, though Rothesay Castle on Bute is more likely. A family of local magnates, the Cochranes, bought the castle in 1636 and almost immediately began robbing the stonework for the rebuilding of nearby Auchans House. Cochrane was a Royalist, and after the Restoration was rewarded by being made Earl of Dundonald. A descendent, and 10th Earl of Dundonald, was the legendary naval figure Admiral Thomas Cochrane (1775-1860). A swashbuckling adventurer, Cochrane even served in the Chilean navy during a period when he was out of favour with the Royal Navy. He became the 10th Earl in 1831. His buccaneering adventures are said to have been an influence on two fictional naval heroes; CS Forester’s Hornblower and Patrick O’Brian’s Jack Aubrey. And further, the Star Trek team’s debt to Royal Navy history and fiction is well-known, so their supposed inventor of the Warp Drive, Zefram Cochrane, is surely a tribute to the 10th Earl of Dundonald.

Dundonald Castle was never lived in again after the Cochrane era. Boswell and Johnson visited the ruin in 1773 during their tour of Scotland and Johnson was apparently much amused that such a grubby ruin could have been a royal residence. Johnson used this as the basis for another tongue-in-cheek snook to cock at Scotland’s relative poverty. Johnson doesn’t mention the visit to Dundonald in his A Journey to the Western Isles of Scotland but Boswell, in his parallel The Journal of a Tour to the Hebrides says of Dundonald:

“It stands on a beautiful rising ground, which is seen at a great distance on several quarters, and from whence there is an extensive prospect of the rich district of Cuninghame, the western sea, the isle of Arran, and a part of the northern coast of Ireland.”

He laments its ruinous, roofless state and goes on: ‘we could not, by any power of imagination, figure it as having been a suitable habitation for majesty.’ Johnson joked about ‘King Bob’ and, according to Boswell, ‘roared and laughed till the ruins echoed.’ As there always are with historic castles, Dundonald has tales of underground passages, leading to Stane Castle and Seagate Castle near Irvine, and to the other Cochrane home at Auchans. Almost certainly there is nothing to these tales, but the children will enjoy hearing them and constructing stories around them.

The building came into state care in 1953. While it is still structurally looked after by Historic Environment Scotland (HES), its day-to-day management is in the hands of a local volunteer group, the Friends of Dundonald Castle. They run a small Visitor Centre with toilets, a café and a small museum. During 2021 HES was forced to undertake consolidation work on some of the building and so it was closed off to visitors. It’s almost a relief to see access limited for a reason other than Covid. However, the Visitor Centre remained open and you can still view the building from outside a temporary fence.

Dundonald Castle has a car park and Stagecoach bus 10 runs here from Kilmarnock. Check in advance to see whether the castle has fully reopened.