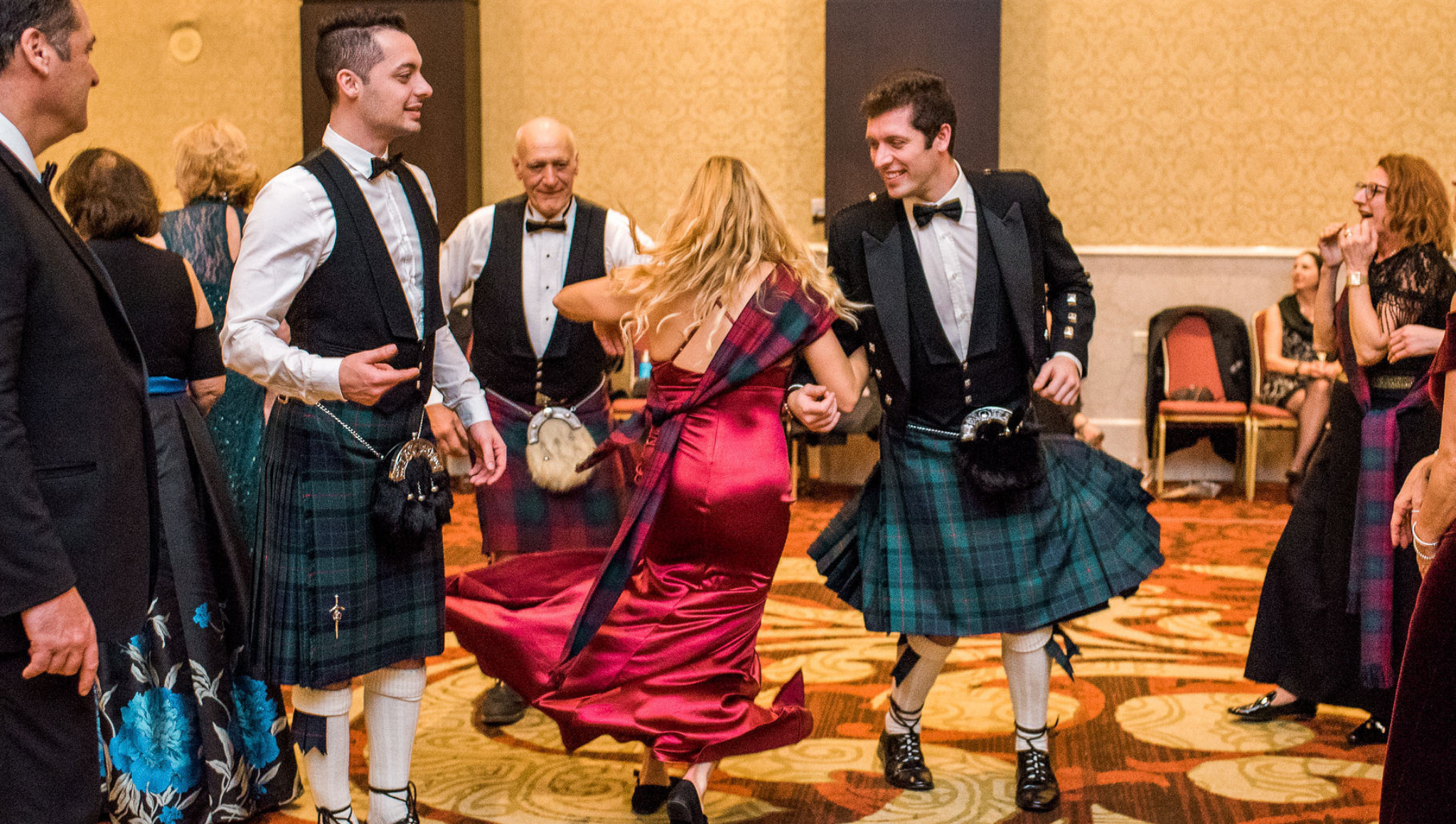 The St. Andrew’s Society of Toronto is celebrating its 185th anniversary in 2021. The organization has been promoting Scottish culture and supporting local charities since 1836. Canada would not become a country until 1867 which makes the Society older than the country it calls home!  Scots have been leaving their homeland for many generations in search of adventure and economic opportunities. As a result, over 50 million people around the globe have Scottish ancestry including 4.8 million Canadians. These numbers are especially remarkable when we consider that the current population of Scotland is only 5.5 million.

A cultural society often followed whenever a number of Scots ended up in one place. Saint Andrew, as patron saint of Scotland, was a common symbol to rally around. St. Andrew’s Day (November 30) became the annual date to gather and dine on traditional fare. After the meal, which would almost always include haggis, there would be a series of toasts, songs and music.

St. Andrew’s Societies were established in dozens of cities on six continents. Although they all operated independently, there were some informal connections among them. The first meeting of the St. Andrew’s Society of Toronto was in 1836. The young city had changed its name from York only two years earlier. It had roughly 10,000 citizens but was growing quickly. While many immigrants found success in their new home, others struggled with unemployment, homelessness, and food insecurity.  Present day Canada has multiple institutions focused on helping people overcome poverty. But since few of these programs existed in the 1830s, it often fell to cultural groups to look after their own. Several of Toronto’s most prominent Scots got together and agreed to form a committee to assist their compatriots who had fallen on hard times. It was determined that the focus would be on those who were newly arrived.

Officers were elected and managers assigned to assist those in need. They focused on finding their compatriots work, a place to live and making sure that families didn’t go hungry. Although the lives of many were improved, times were hard, and death lurked around every corner. Whether it was poverty, illness, or misfortune, many would never see the shores of Scotland again.

The St. Andrew’s Society of Toronto purchased a large burial plot in Mount Pleasant Cemetery in 1886. The intent was that Scots who died in Toronto without resources would be buried in “a small piece of Scotland.” An official dedication came in 1891 along with a cairn. Members in good standing can still apply to be buried in Mount Pleasant.

The connection between The St. Andrew’s Society and the 48th Highlanders of Canada dates back to the late 1800s. A group of local Scottish cultural organizations came together to raise funds and lobby the government to form the province’s first kilted regiment. Despite being rebuffed on their initial requests, the group persevered and achieved their goal. The relationship between the Society and the 48th has remained close since the battalion’s inception in 1891. The organizations have co-hosted the St. Andrew’s Charity Ball for many years with the regiment’s Pipes & Drums a focus of the evening’s entertainment.

Scottish music, cuisine and whisky are showcased at events throughout the year. A Learn to Curl Social is one of the Society’s most popular get togethers. Attendees include many recent Scottish immigrants who are eager to learn a game that was born in Scotland and beloved in Canada.  Canadians of Scottish heritage will continue to play a key role in the future of Toronto. According to the 2016 national census, 256,255 Torontonians claimed Scottish ancestry (roughly 9% of the city’s 2.7 million inhabitants). Among the city’s ethnic origin populations, only the Chinese (332,825), English (331,895) and Irish (262,965) registered larger numbers.

The modern Society has remained true to the benevolent goals of its founders. Funds are raised for local charities through memberships, donations and events that showcase Scottish-Canadian culture. These experiences range from dance lessons to pub nights and formal affairs like the St. Andrew’s Charity Ball. Everyone is welcome to attend events or become a member. It doesn’t matter whether they were born in Scotland, have Scottish ancestors or are just looking to meet some great people.

Over $1 million has been donated in the past 15 years through the St. Andrew’s Charitable Foundation. These grants benefit newcomers from all nations and focus on the challenges that early Scottish immigrants would have faced – families at risk, public health, homelessness and food insecurity. The Society still welcomes newly arrived Scots with open arms. They are introduced at various get togethers and brought to key events around the city.

Every December, members sign up to support the Society for another year. Members receive partner discounts and the opportunity to buy tickets before the public for most events. Their fees help the Society sponsor Highland Dance troupes, Celtic musicians and others working to keep Scottish-Canadian culture alive. These funds also support bursaries for post-secondary students focused on Scottish studies.

The St. Andrew’s Society of Toronto is still going strong after 185 years. Those interested in getting involved can find out more on the Society’s website at www.standrewstoronto.ca

1 thought on “185th anniversary of St. Andrew’s Society of Toronto”