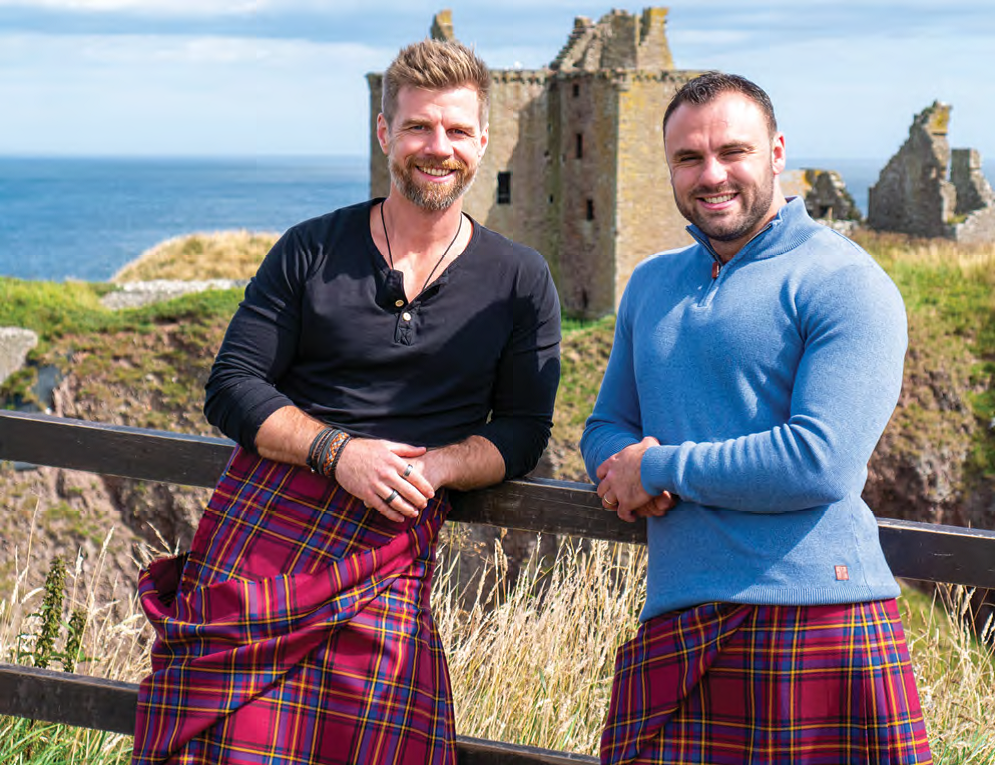 The Scottish Banner speaks to Rab Shields and Stephen Clarke, The Kilted Coaches

The Kilted Coaches are Stephen Clarke and Rab Shields, two Scottish friends based in Perth with a passion for health, happiness, positivity and the wellbeing of the body and mind. The Kilted Coaches have amassed a huge following on social media and their videos have been seen by millions of people. The Kilted Coaches now have a new book out and took the time to speak to the Scottish Banner on their love of Scotland, health, and kilts.

For those that do not know can you tell us just what The Kilted Coaches do and how you both came together?

Coach Rab: Stephen and I have known each other since our paper round days and grew up not far from each other in Fife. We knew of each other for years and as fate would have it our jobs took us both to St Andrews working in the hotel industry. We both ended up moving to Perth as personal trainers and caught up again here and became good friends. In 2014 we both became fathers and ended up having a long lunch and discussing ideas of how we can help people with their fitness goals and established an online business. We viewed that in the fitness industry many people were making themselves unwell in their quest for wellness. People were just taking things far too seriously and getting so super healthy they could not sustain it. We were trying to create a balance between health and happiness, by doing what you can with exercise and improving your nutrition, but also balancing it with a night off and not beating yourself up if you fall off the wagon. It really is a relaxed philosophy for serious results.

You run an online program where people can work from home on their physical, mental health and nutrition. How has this format succeeded during lockdown with so many with time at home?

Coach Stephen: We were already geared up for people being at home before the pandemic hit. We view your wellness being fitness, nutrition, and mindset. There are a lot of great programs out there but the common denominator in all programs is you and what works for you. During the lockdown it was interesting as we would have clients who previously had great results and put in great efforts but during lockdown they may not have been as successful as their mindset was different. If you can get someone fired up and motivated and understand their problems directly, with whatever they are dealing with in life, it allows them to adhere themselves to any program more efficiently. During lockdown people have been dealing with a great deal of stress and anxiety and our approach appeared to work quite well in helping people. The benefit of exercise is well documented, and it really can have a positive impact on people’s lives.

You have said, “Who needs a gym when you’ve got Scotland?” How do you think the incredible scenery of Scotland has helped you get your message out to so many people?

Coach Rab: This all began when we said you don’t need a membership to a fancy gym to get fit. You can either have a space in your home or use outdoor space to reach your health goals. A lot of people are interested in Scotland just now. Shows like Outlander have certainly helped and for people who are not from here they probably enjoy the scenery the most when they get here. People often visualize themselves in a Scottish environment and imagine themselves walking through the heather and amongst the hills we have. Our videos take in some great parts of Scotland, and we have no doubt the backdrop of Scotland helps make them popular and enjoyable to watch.

Congratulations on your new book The Kilted Coaches: How to stick to the damn plan, can you tell us about the book and what it feels like to add authors to your list of achievements?

Coach Stephen: The book is basically the written content of what we have been putting out online. We took some of our key videos and wrote it out for book format. We know not everyone watches our YouTube videos but they may be interested in the book, so for us this is also a different way to get our message out. We have kept the book quite conversational, like our videos.  We have tried to take a relaxed approach and add some humour to the book as we do not want to come across as preachy. There are other books like this where people preach to their readers but that is not our method. When it came to the writing we wanted it to be conversational and for someone to pick it up and feel like they are down the pub with their mates discussing a concept. We have one chapter which is ‘Don’t let your flaws define you’ and was done very conversationally and hopefully when people read it, they do not feel threatened or preached at. The book really is a cross between a self-help book and a coffee table book, it just happens to have two guys in kilts running around the Highlands!

Scottishness is synonymous with tartan and kilts. You have said putting kilts on helped you both be yourselves and show who you really are. Can you tell us more about your love of kilts?

Coach Rab: In the early days we just were not being ourselves and trying to be too clean cut and straight down the line. Somebody said you can’t get away from the fact you are Scottish, so like we talk about in Chapter One of our book, is really being yourself in HD (high definition). This is basically being yourself but a bigger version of you. We thought we obviously can’t get away from being Scottish and we in fact loved wearing our kilts and began to do it our way. Once we put on our kilts, each video we have shot has been done in just one take 99% of the time. The kilts have brought in this natural element of who we are and now we just roll with it.

Historically we mainly wear our kilts to weddings and events and whenever you put your kilt on it was to go and have fun. Whenever we put our kilts on, we always know we are having fun because of the feeling that overcomes you. In a way wearing a kilt is like a superhero suit, we often say you can say what you want when you have a kilt on, meaning you’re not shy to get your point across.

Kilts have really become part of your brand and you have even got your very own The Kilted Coaches Tartan, can you tell how the tartan came about and how proud you are to be able to wear that today?

Coach Stephen: Kilts are just so comfortable to wear, and we started off wearing the Royal Stewart tartan, we chose this as we had different family tartans and wanted a uniform approach. Rab is Clan Duncan and I have Clan Kerr on my side. We always wanted a tartan that is ours and we just recently launched The Kilted Coaches Tartan and worked with a kiltmaker in Scotland to get it designed. Our tartan does pay homage to the Royal Stewart, but we worked in more of a maroon colour, changed the sett and made it our own.

Your videos and new book mention The Viking Mindset, can you tell us more?

Coach Stephen: The Viking Mindset basically gets people back to their Viking roots.  Scots used to go through a great deal of hardship and that made them tougher, for example people had no choice but to embrace the cold. Today we can come home from work and there is food there if I need it, we have entertainment at our fingertips and we can be warm in minutes. The Viking Mindset pays homage to the idea that you can toughen yourself up by taking away some of the comforts that constantly surround us today. Sometimes you don’t know what life will throw at you and it is about being prepared for things regardless of what comes your way. We also use cold therapy such as jumping into a cold loch to reawaken the body and I love a loch swim. Sometimes you need to get comfortable being uncomfortable and challenging your limits, that really is what the Viking Mindset means.

You recently got to work with Joanna Lumley, what was it like to be able to show Scotland off to one of the UK’s biggest stars? Some may be interested to know Joanna in fact has Scottish roots, did she share much of her love of Scotland with you?

Coach Rab: They say don’t meet with your hero’s and we were a bit nervous to meet her, however if every hero was like her, I would say meet with hero’s. She is even better than we thought she was going to be, and we thought she would be amazing. She is half Scottish and loved to chat with us about her roots. Joanna really does love Scotland, and she loves to have a whisky as well. We filmed with her up in Glencoe and it has left such a profound memory for us it is why we went back there and used the image from where we filmed at Glencoe on the cover of the book, to pay homage to her. Joanna was also so kind to provide a quote for our book which is on the cover where she say’s “I never exercise without them.”

And finally, your YouTube channel is filmed in some great places in Scotland. As ambassadors for Scotland what areas of the country do you love to visit whether it be for work or your downtime?

Coach Rab: Glencoe would definitely be at the top of the list as it is both eerie but very strikingly beautiful.  Anywhere as well with castles we love. We have been going up to Dunnottar Castle recently on the east coast in Aberdeenshire, it is a great spot as there are great walks around and the castle itself is fascinating. Just the way it was built and the incredible views the location offers. Anywhere with a great view we love. Scotland is so blessed with amazing hills, lochs, and history. Here in Perthshire, we have great woodlands and waterfalls to take in as well, so we are so lucky to have that on our doorstep.

The Kilted Coaches: How to stick to the damn plan is out now. To order a copy see: www.linktr.ee/Thekiltedcoachesbook or see: www.thekiltedcoaches.com