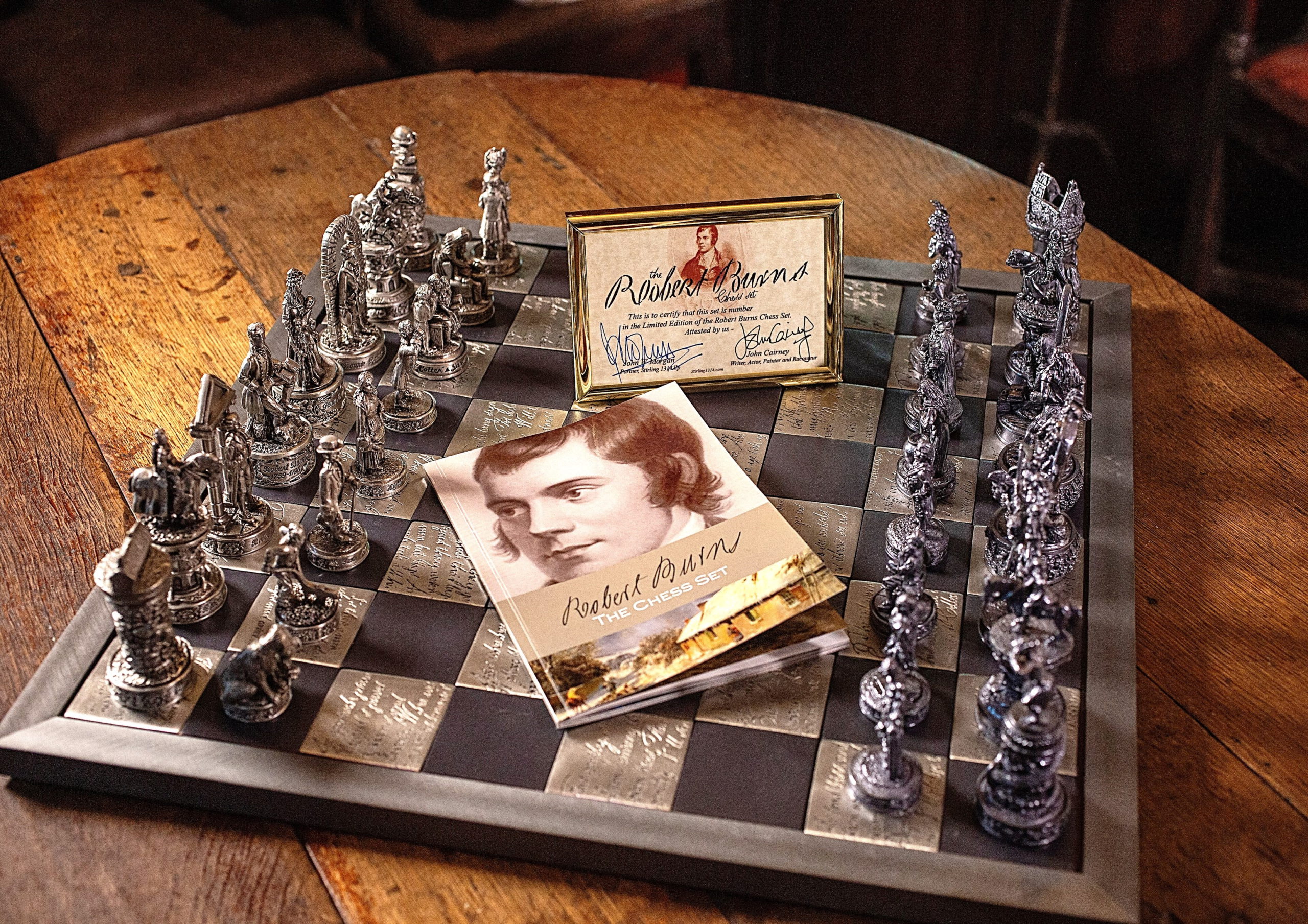 In the late 1990’s, in a friend’s holiday villa in Estepona in southern Spain, John Morgan was flicking through the bookshelf, in search of something to take his imagination when his hand fell upon the paperback Path of the Hero King the second book in Nigel Tranter’ epic trilogy The Bruce. “Tranter’s word-craftsmanship was totally immersing” says John, now Senior Partner of Stirling 1314 LLP, producers of two of the worlds’ most luxurious chess sets.

“His ability to use dialogue to bring heroes and villains to life, turned a history lesson into gripping adventure, and an uninterrupted read, cover to cover. So much so, that when I arrived back at Glasgow Airport, I went straight to WH Smith newsagent, where I bagged volumes one and three – books I finished with equal dedication and pleasure. The rest, as they say, is history.”

The story that changed history

The following year, that experience took a different turn for the Morgan’s, one that is about to take on a new life this month as Stirling 1314, seeks to relaunch their two luxury offerings – the Battle of Bannockburn and the Robert Burns Chess Sets.  We caught up with John as he was filming blog content for their new Chess Set website in the Globe Inn, Dumfries, the favoured haunt of Robert Burns in the latter part of his life. Sitting in the very chair adopted by Robert Burns when he frequented the Inn, John was quick to point out, “I have earned the right to sit in Burns’ chair having have paid the mandatory forfeit – ‘a recitation of Burns – or buy a drink for everyone in the house’. I would gladly pay a small ransom to share this chair with his memory, but I love nothing more than reciting Burns, and a few verses of Tam O’ Shanter were payment in full”

As he moved the crafted, pewter pieces across the stunning metal chess board, John reflected on the early beginnings of their Scottish chess set adventure. “In the late 90’s, my wife Morag and I had Cornerstone Gallery and Gift Shop in Dunblane”, said John, “One day, an artisan model-maker, Steve Trickett, breezed in and asked if we would be interested in selling the Fantasy Pewter Chess Set he had modelled. Unlike conventional chess sets, all 32 of Steve’s chess pieces were different, everyone a revelation: from fairies to goblins; knights to castles: and things even more preposterous. I was lost for words but, in that moment, the flame was lit for an even bigger adventure – a Battle of Bannockburn Chess set with 32 different pieces, each one marking a player or place in the story that changed history. When I told Steve what I was thinking, he just looked at me – and I knew he was already on the case!

Believing faithfully in the principle, ‘if you don’t ask…you don’t get’ I plucked up the courage to contact Nigel Tranter, who amazed me by agreeing instantly to being involved and to give his name to the set. He then introduced to us, young Scottish costume historian, Andrew Spratt who went on to provide illustrations in the most minute detail, of the style and heraldry of every character, right down the shape of a belt buckle or the hinges in a suit of armour.

Over the next two years, the four of us created a simply remarkable chess set. Sadly, neither Nigel nor Steve are with us any longer, Nigel passing in 2000 and Steve in 2016, only months after completing the last figure on the Robert Burns Chess Set. In the case of Bannockburn, Nigel’s endorsement of the set has been inherited by Scottish television historian and writer Neil Oliver, retaining for the Battle of Bannockburn Chess Set the gravitas with which it was born. It was remarkable to know them both and an extra privilege to know Nigel, not only as a brilliant writer, but as a complete gentleman and a true friend. Which is why our 700th Anniversary Edition is dedicated to his memory.”

The Robert Burns Chess Set, endorsed by actor, writer, raconteur and Burns legend, John Cairney, was a challenge of a different kind for Stirling 1314, as more a tale of ordinary folk and their fantasies within the culture of 18th century Scotland. Where else would you find Witches and Warlocks blended with the simplicity of love, honour, and a deadly twist of humour?  John has been Chairman of his own Old Manor Burns Club of Bridge of Allan for the last 40 years, and one of the 37 members of the Robert Burns Federation Guild of Speakers. So, it was no surprise that his next move was to create the stunning Robert Burns Chess Set.

“My original inspiration was unquestionably Nigel Tranter” says John, “But the pen of Robert Burns and his mark on the life of all rue Scots, had a quite different influence on my life. As much in his life as in works, there is love and treachery, inspiration, and hypocrisy, all of it now encapsulated in beautifully crafted chess pieces. As though to complete a circle of sorts, Robert Burns features in both sides: predictably, as the King in the light side but, in irony, as a dark knight in his noted role as Exciseman.”

Says John with perceptible pride, “For me, the crowning glory of this fabulous set is the chess board. It is so stunning I am often tempted to hang it on the wall! The squares are cast in pewter, with a different quotation for each light square, individually etched in the style of Burns’ handwriting. An interesting twist to any chess match would be to have to recite a few lines from the poem your piece lands on. But maybe that’s for another day!”

There are no plans yet to develop a third chess set. As John noted, “Bannockburn was epic in every sense – scale and national significance first and last, whereas, by dint of his incredible life and outstanding variety of work, you could do a second Robert Burns set and still have characters left over. But I think we’ve got enough to be going on with for now…”