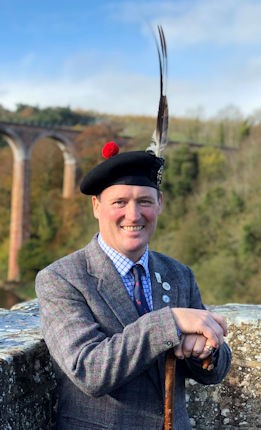 James Brodie Macpherson of Cluny is the 28th hereditary chief of the Clan Macpherson of Cluny (Cluny-Macpherson). Born on 5th June 1972, he was educated at Summer Fields, Oxford; before going to Fettes College, Edinburgh; and then on to Guilford College, in Greensboro, North Carolina where he obtained a BSc in Sports Management and Business. On his return to Scotland, after working with Whitbread plc in London, he joined Ben Sayers Golf Company as a Commercial Manager before going into property and thereafter he set up his own property business in Melrose, aptly named Macpherson Property. In 2002 Jamie married Annie Alexandra Macpherson, a company director and a daughter of The Lord and Lady Macpherson of Drumochter, who was co-incidentally the son of one of the co-founders of the Clan Macpherson Association in 1947.

Jamie and Annie have three children: William Thomas (younger of Cluny), Lucy Catherine, and Angus James. Hugely passionate about all things Scottish, Jamie also has a great interest in the outdoors which include golf, rugby and fishing. The family home is Newton Castle, Blairgowrie, Perthshire, which has been the home of the Macphersons since 1787. Currently, Jamie and Annie live in Melrose in the Scottish Borders, the home of Rugby 7’s.

The 27th Chief, Sir William Macpherson of Cluny and Blairgowrie, passed away in February and served as Chief of Clan MacPherson for fifty years.

For information on the Clan Macpherson Association see: www.clan-macpherson.org

1 thought on “The 28th Chief of Clan Macpherson, James Brodie Macpherson of Cluny”