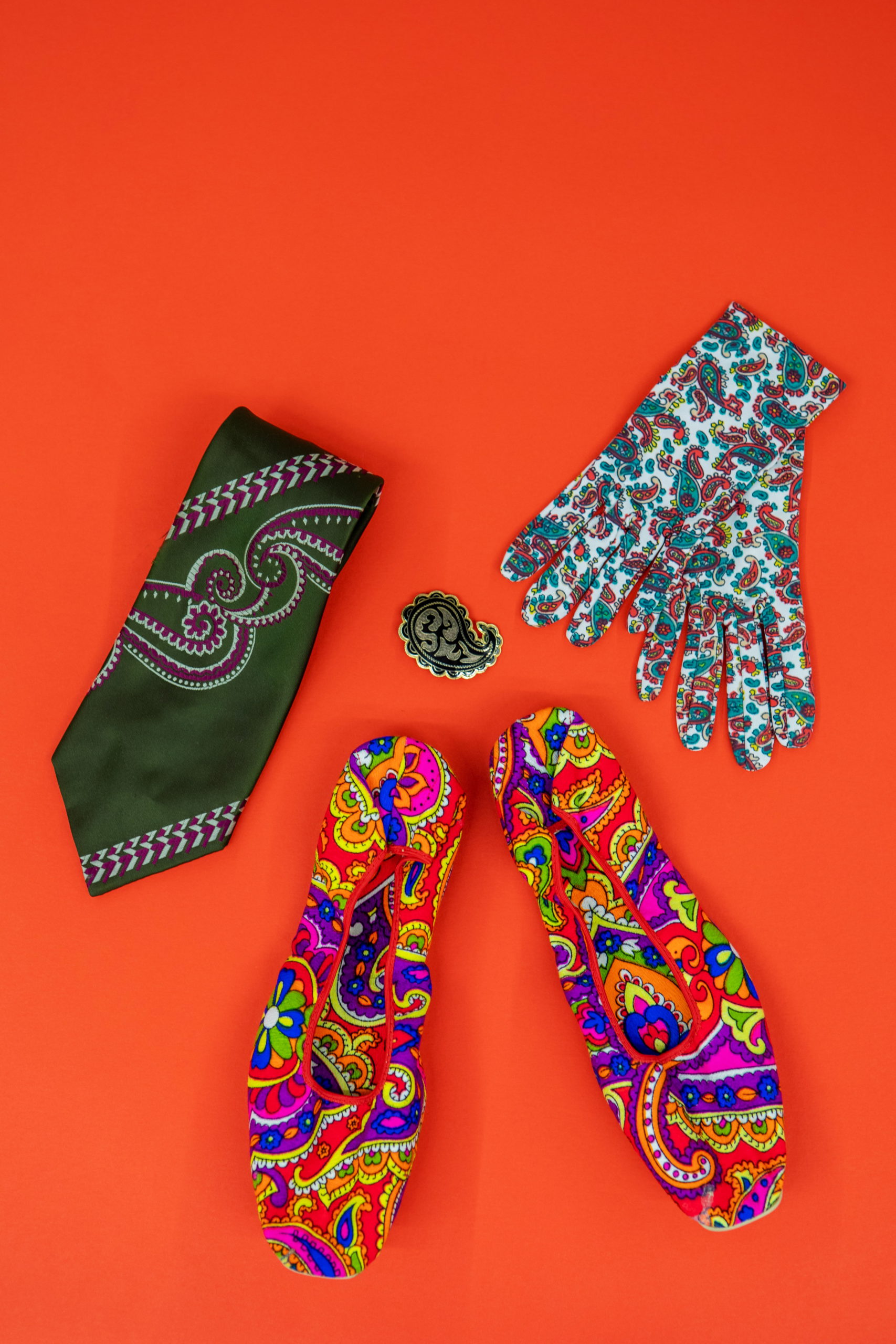 Fashion designer Pam Hogg is leading a call-out for Paisley-patterned items the public have at home – from clothing to cookware – to mark the 150th anniversary of Paisley Museum. The #ShowUsYourPaisley call-out will encourage the public to share any objects they have incorporating the famous pattern, with the museum considering the most intriguing and unusual submissions for inclusion in a new display being created as part of the museum’s £42million redevelopment. Items can be historic or contemporary, high-fashion or functional, but all need to feature the iconic teardrop motif.

Pam Hogg, Paisley-born designer and Patron of Paisley Museum, said: “The Paisley pattern has had a lasting impact on the world and has been endlessly reinterpreted and reinvented. There are examples of Paisley pattern all around us and I’d like to encourage the public to share their items and the stories of how they were acquired, used, loved and passed down. The most interesting will be considered for display alongside a piece from my 2020 couture show, where I created the Paisley Poodle print incorporating my life-long love of the iconic Paisley design. As a child I was fascinated with the museum’s collection and can’t wait for its expansion.”

Paisley’s Free Public Library and Museum opened on 11 April 1871, aiming to provide local people with the means of self-improvement inspired by the ideals of the Scottish Enlightenment. It was open to all, although it had strict by-laws for entry which excluded anyone “in an intoxicated or unclean condition” or those “in whose house infectious diseases exist”. In 1905, the museum held its first exhibition of Paisley shawls in recognition of the impact the textiles had had on the town’s fortunes. Many gifted these shawls to the museum permanently when the exhibition concluded, and over 115 years later the museum is asking the public to continue this tradition.

Kashmir shawls began to arrive in Europe in the 18th and 19th centuries, brought back by travellers and via trade routes, including with the East India Company and the Mughal Empire. Many featured the ‘boteh’, a motif in the shape of a curved droplet. By the 1800s they had become extremely fashionable and European textile centres began producing ‘imitation Indian’ shawls. Manufacturers in Paisley quickly adopted new weaving techniques and technologies including jacquard looms, allowing them to mass produce these items and become the market leaders by the 1830s.

This sparked the start of the trend for referring to these shawls as ‘Paisleys’. Kirsty Devine, Paisley Museum Project Director, said: “The iconic teardrop motif has long been associated with Paisley’s history and heritage and is an integral part of the museum’s collection. We will tell the story of this design, so synonymous with the town, from its Kashmir origins all the way through to its modern-day use by major fashion labels. The pattern has been seen on different types of objects globally throughout history. What better way to celebrate the 150th anniversary of Paisley Museum than paying homage to the town’s most famous export? We’re very excited to see what hidden gems the public are able to uncover and share with us through the #ShowUsYourPaisley call-out.”

Although the fashion for the shawls that made the town’s fortune dwindled by the 1870s, the ‘Paisley pattern’ continued to appear in garments and in the 1960s had a dramatic revival with the likes of rock legends The Beatles and Jimi Hendrix wearing the designs. The pattern has continued to be a source of inspiration for leading fashion designers, including the Italian fashion house ETRO. Jacopo Etro, Creative Director of ETRO Home & Accessories, said: “Paisley has appeared on every imaginable fabric, bridging East and West, masculine and feminine, elegance and eccentricity. The symbol has evolved and morphed as new techniques and colours have been applied to it, carrying the design from clothing into the worlds of accessories, fragrances and homewares.” Away from the world of fashion, the pattern also began to appear on mass-produced objects from the 1960s onwards. The public have sporadically gifted these objects to the museum – from a frying pan to a roll of toilet paper donated for people’s “amusement, edification and enjoyment”. It continues to appear on everyday objects, most recently on face masks during the Covid-19 pandemic.

Paisley Museum is being transformed into a world-class destination which will retell the town’s story to the world and help bring huge volumes of new visitors and footfall to the town. The work is the flagship project within Renfrewshire Council’s wider investment in venues and the town centre aimed at using Paisley’s unique and internationally-significant cultural and heritage story to transform the area’s future.

The public has until Sunday 30 May 2021 to submit their Paisley pattern item suggestions for consideration. They should be emailed to [email protected], or shared on social media using #ShowUsYourPaisley and tagging @paisleymuseum and include a photograph, description and story behind the object.