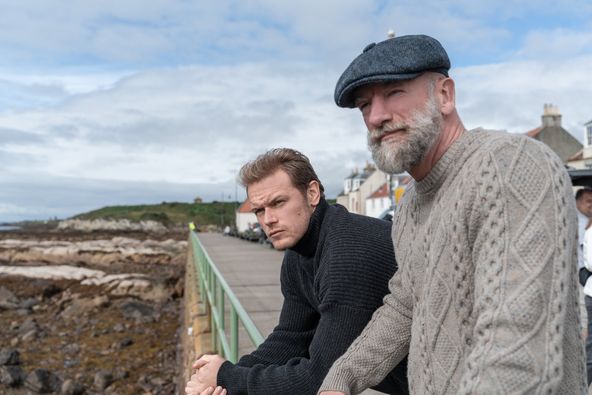 Outlander’s Sam Heughan and Graham McTavish take viewers along on their adventures, discovering the rich, complex heritage of their native country, meeting local artisans and experts, and experiencing genuine moments of awe and fascination.

Men in Kilts: A Roadtrip with Sam and Graham is a fun-filled buddy travelogue through Scotland led by Outlander stars Sam Heughan and Graham McTavish. The two have reunited for an epic adventure, exploring their heritage and meeting an incredible collection of people who truly showcase what it means to be Scottish.

The half-hour, eight-episode series offers the duo’s one-of-a-kind perspective on everything from Scottish clans and the Battle of Culloden to whisky tasting and folk dancing, with Sam and Graham’s witty banter and hijinks leading the way. Whether hanging off the edge of a cliff, wrangling a flock of wild sheep or discovering the true legacy of their Outlander characters, both men dive head-first into each and every experience. Sam and Graham’s shared love of Scotland helps make this series so special as they experience, learn and fall more in love with their very own homeland.

Graham McTavish told the Scottish Banner: “I feel very strongly about bringing people to Scotland and showing them what the country has to offer, not just historically, but in terms of its contemporary life-the great food, the wonderful tradition, the people, and the landscape. There is so much and that’s what we try and cover in the TV show.  I was amazed at how much I learned while we were doing all this, doing the research, working on the book (Clanlands) and filming.  Hearing just wonderful stories from traditional Scottish storytellers, from clan chiefs, from other historians, just such fabulously rich conversations with people. I always knew Scotland was full of these amazing characters, but had no idea that these sorts of people existed. We met some wonderful people filming that you could not have made up. The stories they told, the places they lived made it really a journey of discovery about the character of Scotland through the people we met.””

The many things Scotland is famous for

Each episode takes viewers on a journey to sample some of the many things Scotland is famous for and meet’s some great people. Christina Davis, president, original programming of Starz, said in a statement: “The genuine curiosity and passion that Sam and Graham have for the landscapes they visit and the stories they uncover while travelling through the heart of Scotland make this show a truly enjoyable journey of discovery for the audience. The series gives context and texture to Highland life and history, woven together, much like the tartan for which Scotland is so famous, and we look forward to taking this road trip with these two great friends.”

E 1: Scotland’s cuisine and whisky are renown throughout the world, for di­fferent reasons. Sam and Graham explore (perhaps a little too passionately) what it takes to make the world’s finest whisky and to cook “only in-Scotland” dishes like Haggis.

E 2: The duo also explores both classic and modern Scottish sport as they take on everything from lifting stones and throwing the Highland Games Hammer, to golfing at the revered St. Andrews and suiting up for a rugby lesson at Murrayfield Stadium.

E 3: Scottish music and dance played an integral role in the culture, serving as a form of celebration, communication and in certain times, rebellion. Sam and Graham set out to meet the artists who continue this tradition and try everything from sword dancing to sheepherding.

E 4: Deep belief and reverence for the supernatural characterize the culture of the Scottish Highlands. Sam and Graham take a deep dive into old superstitions, witch trials and their imprint on the country. Plus, Sam spends the episode trying to scare Graham at every turn.

E 5: Few countries on the planet rival Scotland when it comes to proud tradition. Despite centuries of British rule, remote rural communities persist in ancient rituals of craft, language and storytelling. Sam and Graham will roll their sleeves up and take part in some of the traditions that have shaped Scottish culture.

E 6: Simply put, Scotland is one of the most beautiful countries on the planet, off­ering rolling hills, epic mountain ranges and jagged shorelines sure to make any viewer’s jaw drop. This episode lets Sam and Graham share (and show off­) the natural wonders of their home country with the world.

E 7: Scotland’s feudal clan system defined the country and still plays a massive part in the modern culture and identity of its people. Sam and Graham set out to discover how they (and their Outlander characters) fit into a system forged through war and peace.

E 8: No moment in Scottish history helped shape the country more than the Battle of Culloden. All of the elements in previous episodes will point to this critical turning point both for the nation and the Outlander series. In this final episode, Sam and Graham will discover how a single hour on the battlefield forever changed a nation and its people.

The chemistry between Sam and Graham is a natural fit to showcasing all that Scotland has to offer. Graham continued: “I just can’t imagine doing this with anybody else.  It required a very particular combination of things for it to work and touch wood, I think it has worked. And honestly, I would not have been able to say for sure that that would have been the case beforehand. But in the actual doing it, it became clear very quickly that we have a very natural way of bantering with each other that is not forced. So, yeah, it’s a lot of fun.”

No doubt, like Outlander, Men in Kilts will also sell Scotland to a wider audience around the world. It is hoped when travel recommences this will translate to people looking to visit either again, or for the first time. This will of course provide a huge shot in the arm for Scotland’s tourist industry, who have been doing it incredibly tough. VisitScotland estimates that about 8% of leisure visitors to Scotland (approximately 700,000 people) came due to seeing Scotland on the big or small screen. The national tourist board released a paper in 2019 called The Outlander Effect and Tourism which reported that attractions that appear in the Outlander TV series have seen visitor numbers soar by 67% since 2013, from 887,000 to 1.5million.

Men in Kilts, which is produced by both Sam and Graham, will give viewers a snapshot of some of the country’s historic sites, culture and iconic locations in the hopes it inspires people to take their own road trip to Scotland. There is already talk of a further series to travel not only to parts they missed in this series such as the far north and very south of Scotland but also an international version to see where the Scots have made their impact in places such as North America and Australasia. Men in Kilts transports people across some of Scotland’s diverse locations, stopping at stunning locations such as Pittenweem in Fife, Edinburgh’s Old Town and Glencoe to name a few. For those of us that have been waiting to get back to Scotland this may just help us keep our dreams alive until we can safely travel again.

Have you seen Men in Kilts? Tell us in the comments below.

1 thought on “Men in Kilts: A Roadtrip with Sam and Graham”