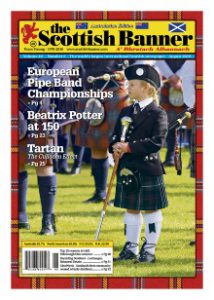 Scotland the land of music and culture

August is an incredible month for many reasons. The weather is usually better this month than any other time of year – at least here in the Northern Hemisphere. The children are happy as they are usually out of school on summer holidays, many people are on vacations, and around the world things seem to slow down while people take a little time off, before starting off for the busy fall season ahead. When my children were young we all looked forward to being together for the summer season, and I would often try to have outings with them to enjoy each other during that time.

However by the time the month was over and it was time for school again, both they and I were ready to get back to school routine again. Today as I look through events taking place in Scotland I see that the month of August is a very busy month, bursting with festivals both musically, as well as art festivals. In fact, after writing about Scotland in this publication for many years, I am still overwhelmingly impressed with how proud Scotland is of her own heritage. By this I mean how proud a country it is which seems so proud of its’ music and other forms of heritage in so very many ways.

Scotland continues to present numerous high profile events and festivals. Whilst these events are taking place across the country in the form of music festivals or highland games, Edinburgh in particular seems to be bursting at the seams with cultural events. No question about it, Scotland certainly is proud of its culture and wants to not only enjoy it themselves, but show it to the thousands of visitors who will be visiting the country over the summer months. Edinburgh alone has so many events which show off both the music and the dance of Scotland, as well as many from around the world, making it a melting pot of performance culture. Some of the more important of these is the Edinburgh Festival, Festival Fringe and The Royal Edinburgh Military Tattoo. Surely nothing is more Scottish than the Tattoo and when it annually visits Edinburgh each year, it brings with it thousands of visitors who are there to not only to see the country – but also this outstanding event. As a child I often watched this event on television and could hardly believe the time when I was actually taken to the Mound in Edinburgh to watch it for myself. As I expected it was a most thrilling experience with the sound of the pipes and drums, the beauty of the Scottish dancers, and the pride of the guards as they marched so impeccably in their ranks.

A stirring experience indeed, and certainly one that highlights the Scottish pride in each and every Scots heart. Yet the Tattoo is by no means a new or a recent event in Edinburgh. The first time it took place was as far back as 1950. At that time I was living and growing up in the UK. During that time it had also never been televised and so, of course was not so popular as it became later. Of course when that started happening the Tattoo soon became far better known, making the Tattoo far more important to not only Edinburgh but also to Scotland itself – particularly for the tourism cash which it helped to encourage. This year as the 2016 Tattoo prepares to unfurl the Tattoo will celebrate its 66th anniversary. This of course is quite a celebration, from its early days, the Royal Edinburgh Military Tattoo has been an international favourite. Performers from over 48 countries have taken part in the Tattoo including from Australia, Canada, New Zealand and the USA.

Each year the Tattoo is very much a ‘global gathering’ which showcases the talents of musicians and performers from every corner of the globe. The international flavour of the Tattoo has been deliberately developed as a key element to capacitate and entertain a huge, cosmopolitan audience. Now that it is televised it is still as strong as ever – perhaps even more so. In spite of its length of time running, the Tattoo has always been staged at Edinburgh Castle (apart from Tattoo productions that have been held in both Australia and New Zealand), although rehearsals for the event take place at Redford Barracks, which is also in Edinburgh. Since its inception it is believed that more than 14 million people have attended the Tattoo. This amount, coupled with the viewing audience internationally, is generally thought to be 100 million spectators making this an extremely large and loyal audience. Experts believe that approximately 70 percent of each audience comes from outside Scotland, with half being from overseas. In spite of the length of time the Royal Edinburgh Military Tattoo has been running, not a single performance of the Tattoo has ever been cancelled – that in spite of the somewhat changeable weather within Scotland. Yet of course, Edinburgh is not the only city you will find in Scotland ready and willing to show its’ historic exhibitions this summer.

Pipes out in Glasgow

Another exciting event taking place this year, this time in Glasgow, is Piping Live! the international piping festival and the World Pipe Band Championships. Piping Live! will take place August 8 -14 August, and will include not only some of the world’s finest piping but also entertainment by the fantastic Red Hot Chilli Pipers, who will also bring their “bagrock” to the event. There will also be many other entertainers on hand for the event. This year Piping Live! will also be adding Scottish food and drink to the event as well as a new addition called, ‘Moments that Matter’. Whilst the world’s pipe band community will also descend on Glasgow Green for the World Pipe Band Championships this month. In this issue we get a different perspective and hear from one of the international judges for this event which showcases the sound of Scotland like no other.

It certainly does sound as though Scotland will be very exciting this summer and will be sure to draw even bigger crowds this year than ever before. For the small country that Scotland is (approximately 30,414 miles), it certainly has a great deal going on. It is a country that boasts it’s heritage and welcomes the rest of the world to share it. For a small country Scotland will be punching above its weight with world class music and culture, if you’re going to Scotland this summer – you’re going to a very unique place in this world.