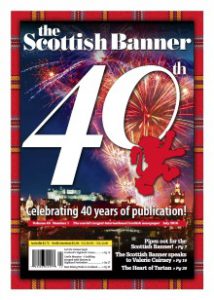 The front page of this issue of the Scottish Banner, is one I never thought I would see. It announces it is the 40th Anniversary of this publication. When first we started publishing I never would have dreamed we would have continued to see such a long anniversary!

I recall when printing our first edition back in 1976. Well! Just printing that issue seemed to take almost half a year. Living in Canada at the time, as I did, I thought starting such a publication for ex-pat Scots should first be presented at a Scottish event. A rather big Scottish event. But where? In those days we were just a Canadian distribution, so my choices were smaller than they would be today, distributing across Canada, U.S., as well as Australia and New Zealand. While choosing where to first distribute the publication, I compared the time of year (summertime). What happens then? Highland Games, of course.

The next question was – which one? After a quick study of those available to me, I decided Fergus Highland Games was one of the largest in Ontario and was also close to Toronto. Prior to making a final decision on this location, I called staff at the Fergus Highland Games to ensure I had their approval. Pleased with their answer I made plans accordingly. After a long and arduous press time, and with that first July edition finally printed, the morning of Fergus Highland Games gates opened up with myself at the entry gate handing complimentary Scottish Banner’s out to those arriving inside the Games area. Of course, nobody had ever seen a Scottish newspaper in Ontario – unless it was imported, and so everyone had the same question. “What’s this?” they asked. When told it was a newspaper for ex-pat Scots, they looked at me scornfully. “No such thing”, they said. “Maybe for the English. Not for us Scots”. I responded by urging them to take a copy to see for themselves. After looking at the Banner for a moment they walked away quietly. It was simply that- all day long. When it was over I knew it was too early to see how it had really gone. For that I would have to wait and see. Fortunately my answer was not long in coming back to me.

Monday morning the phone in the office started ringing before 7am – unusually early for us. It continued all day long reminding myself to order more than the two lines I currently used. I also needed help to answer phones, as I was overwhelmed with the amount of activity in the office that day. These calls were mainly subscription requests, advertising enquiries were very popular also, certainly two things I needed. I was taken by surprise by the activity of the office after only one Highland games – yet, I reminded myself, I planned on attending many more -and so I had to be ready. Driving home from the Games that Saturday night I was both elated and exhausted. I thought the day had been a success and after meeting more people than I ever imagined possible, had many positive comments on the publication, I felt the Scottish Banner had won the day. Yet, in spite of the success of that memorable day, new concerns were already being considered. A second issue now had to be worked on. Distributors had to be met. Writers needed to know deadlines for the next issue. Also, unlike before, the phones in the office were now ringing off the hook-not only from subscribers, but also advertisers and, just simply, curiosity seekers. Suddenly the office had come ‘alive’, and I was increasingly concerned about how the next issue would ever get to press. On time? Yes, of course it did. As have hundreds of other issues ever since.

Those early days were full of surprises. I could never have dreamed how many people I would meet, either physically, by telephone, or through the mail after being introduced through the Banner. To my amazement some of these were very famous names, while others were well-wishers who simply wanted the Banner to succeed. Letters came from across Canada, U.S.A and Scotland itself. I particularly recall one letter from Scotland not long after we first started printing. The writer informed us that he had just discovered the Scottish Banner, which he enjoyed greatly. He also wondered if we would be interested in an article from him? I continued reading through the letter. When I read the name of the writer I was shocked. It was none other than Nigel Tranter. I held the letter thoughtfully, while looking at his name. I reminded myself this man’s name has gone down in Scottish writing history – where it will remain for many years to come. Of course, I was thrilled to respond positively to his suggestion. Shortly thereafter Nigel was writing a monthly column for the Scottish Banner, which was very happily received by both myself and our readers. Sadly this great man left our world in the year 2000. Yet while he was here, we were proud to call him a Banner writer. He was a man who, through his many novels ‘lived’ the lives of all the kings of Scotland, as well as notables including William Wallace, Robert the Bruce, and others. When speaking to me one time Nigel advised, “The problem is the next stage”. When I questioned this he responded by saying, “Well, that is when I will meet the people I have been writing about. They will question me by asking ‘What is that you wrote about me, eh?…..” Nigel was more than a gifted writer, he was one of Scotland’s finest sons, and is missed today not only by us, but many thousands around the world. Who recalls that old radio programme Life with the Lyons, back in the 50’s. As the Scots maid in the Lyons family, Molly Weir delighted listeners with her weekly programmes about a Scot living life with an American family while in the U.K. Molly also became a Scottish Banner writer later, whose articles were a great success with readers.

Today we have still other wonderful writers. A true and good friend for many years Lady Fiona MacGregor has blessed our pages with interesting articles for some time. As I write I understand she and husband Sir Malcolm are currently in Australia. My good wishes go to them on their journey. In spite of living in Australia, Jim Stoddart brings his many years of Scottish upbringing into the Banner pages each month, and is much appreciated. I must also mention What’s In A Name columnist, Ron Dempsey, who is the longest running columnist of all. We are fortunate to have contributions from across three continents giving a true Scottish global outlook from a diverse range of writers and media partners. Yes, my forty years with the Banner has given me an interesting and varied way of life, meeting many interesting and famous people many of whom I might otherwise never met. Royalty seems to have visited Ontario in the mid-70’s more so than today. I recall visiting the Royal Yacht Britannia and chatting with the Queen while on board. I found Her Majesty such a warm, genuine, and comfortable lady to speak to, that when she spoke so highly of her Scottish grandmother, I had to remind myself that she was actually speaking of Queen Victoria. Of course there have been many, many, deadlines, with many (but not all), having been met.

When my son, Sean graduated from university, many years ago he toured the world to decide where he wanted to live. I was thrilled when he took the Scottish Banner to Australasia for distribution there. In doing so he has become a huge help to me here in North America. The Banner helps us keep a little closer – in spite of many miles between us. My thanks to you – our readers, advertisers and friends for bearing with us for these many years. Today you are more than Scottish Banner readers – you, like Sean, are family we visit once a month, and just like other family we know you are always there – as part of us.
Finally, I would like to thank the many people who have sent us congratulatory messages on page 3 and 15 and helping to celebrate this anniversary. They include many close friends and warm memories, thank you all.