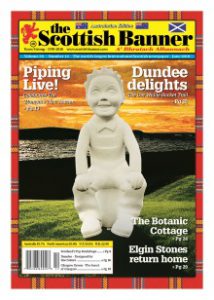 Like many Scottish Banner readers I also am an immigrant, arriving in Canada as I did, with my parents many years ago. For me it was a very difficult and unhappy experience. Why? At the time I was leaving my friends-and in particular my boyfriend, who made my life in the U.K, a very happy place to be. Of course our family had discussed the ‘big move’ many times, and yes, at the time I too thought it was a good decision. But as the time went by and I realised the importance of ‘leaving my friends’, so soon, things changed a little.
I arrived in Canada missing both my British lifestyle and my friends. That was way back in the 50’s, and as we all know, as we grow older, things change greatly in life. Today I am happily both as a U.S., as well as a Canadian citizen. And I love both. Yet I was particularly interested in an article in a recent Scottish newspaper about a Glasgow primary school. An article which I felt I had a lot in common with.

The school in the article was the Annette Street Primary School, situated in Govan, Glasgow, Scotland, and the ethnic profile of the students attending this school may not include a single child born to conventional white Scottish parents. Yet the children who populate the diverse roll, many who were born on these shores, are keenly aware of the culture of their city, country, homeland and heritage, as well as those of their classmates. The school is in an area with a proud history of migration where many migrants of Irish or Polish families once settled in their search for a new life. The teachers are from Scotland, England, Europe and Pakistan – probably reflecting on the birth countries of their students. The schools 129 year old walls are filled with a multi-lingual diaspora and prides itself on the colourful studies on many Scottish subjects along with a corridor of stairs decorated with projects on the life and legacy of Robert Burn, there are pictures of Hebridean island life – signed by each pupil. The teacher, who is also a former pupil will end her association with the school, which stretches back five decades when she retires at the end of this academic year Her classes, pupils from Ben Nevis are striving to out-do each other in a race to name as many lochs as possible. Safwan, an 11 -year old Celtic supporter from Pakistan, and Hamreeb, a Rangers supporter of the same age from Glasgow, are part of a group of boys discussing the legend of the Scottish Kelpie. “It’s a hybrid of a fish and a horse”, offers one.

Another classmate, 10-year old Daniela, from Brazil, can recount the mythology behind the ree, the fish and the bird on the bell a feat many a born and bred Glaswegian might struggle with. She then tells how she went to Hampden to see Scotland play Denmark in March, singing the national anthem on the way – causing one Glasgow wife to tears. In her office – with the door bearing the words “Head Teacher” in nine different languages – Shirley has just waved a bus-load of kids off on an outing to Finlaystone Country Estate in Renfrewshire, on a language and environmental trip. Another group are on a litter-picking mission, collecting rubbish from the nearby streets. Cambuslang Park is looking better after its spring clean.

The school was the first in Glasgow to earn a Green Flag for Eco-Schools environmentalism (Eco-Schools is an international initiative designed to encourage whole-school action on sustainable development education issues). It currently has six. Shirley said, “We have children who are Scottish Pakistani, we have Roma children who were born in Scotland, and although their families might originate in Slovakia, Romania or elsewhere, we very much view them as Scottish. But to me, it’s actually not important which children were born in Scotland. We do a lot of work in the school about Scotland and Glasgow. We get the kids out and around Glasgow, we teach them about their city, their country. We educate them about Scottish culture and traditions but not at the expense of their own. There’s a commonality of language used in the school. We look for ways to develop them in all sorts of ways. Citizenship is a huge part of that. Our children take small steps and make huge achievements with them”.

Despite the right-wing sneering, the crowdfunding is on target to raise more than six thousand pounds in a week. There will be more playground equipment and more educational trips. Unlike some Scots, these kids can sing all three verses of Flower of Scotland. They sing our-their-national anthem with obvious pride. Theirs is the voice of a modern country. Wherever they go, Scotland will be a part of their story. And they are a welcome part of ours.

In this issue we are also highlighting in our series of Scottish cities and regions, Dundee. One of Scotland’s (and the UK’s) fastest changing places. A new creative hub and an amazing waterfront development is being created. The project is being led by Dundee City Council, Scottish Enterprise and the Scottish Government. The success of this long-term project, which commenced in 2001, is already starting to show with new buildings and businesses emerging and major attractions, such as V&A Dundee, promising great potential for the future. Dundee was long known for the three J’s- jam, jute and journalism. Today the city of discovery and design is a forward thinking city on the move and we are excited to watch Dundee reinvent itself and play its role in the story of Scotland.

For more information or to help with the Annette Street Primary School Crowdfunding Project: see: www.annettestreet-pri.glasgow.sch.uk.