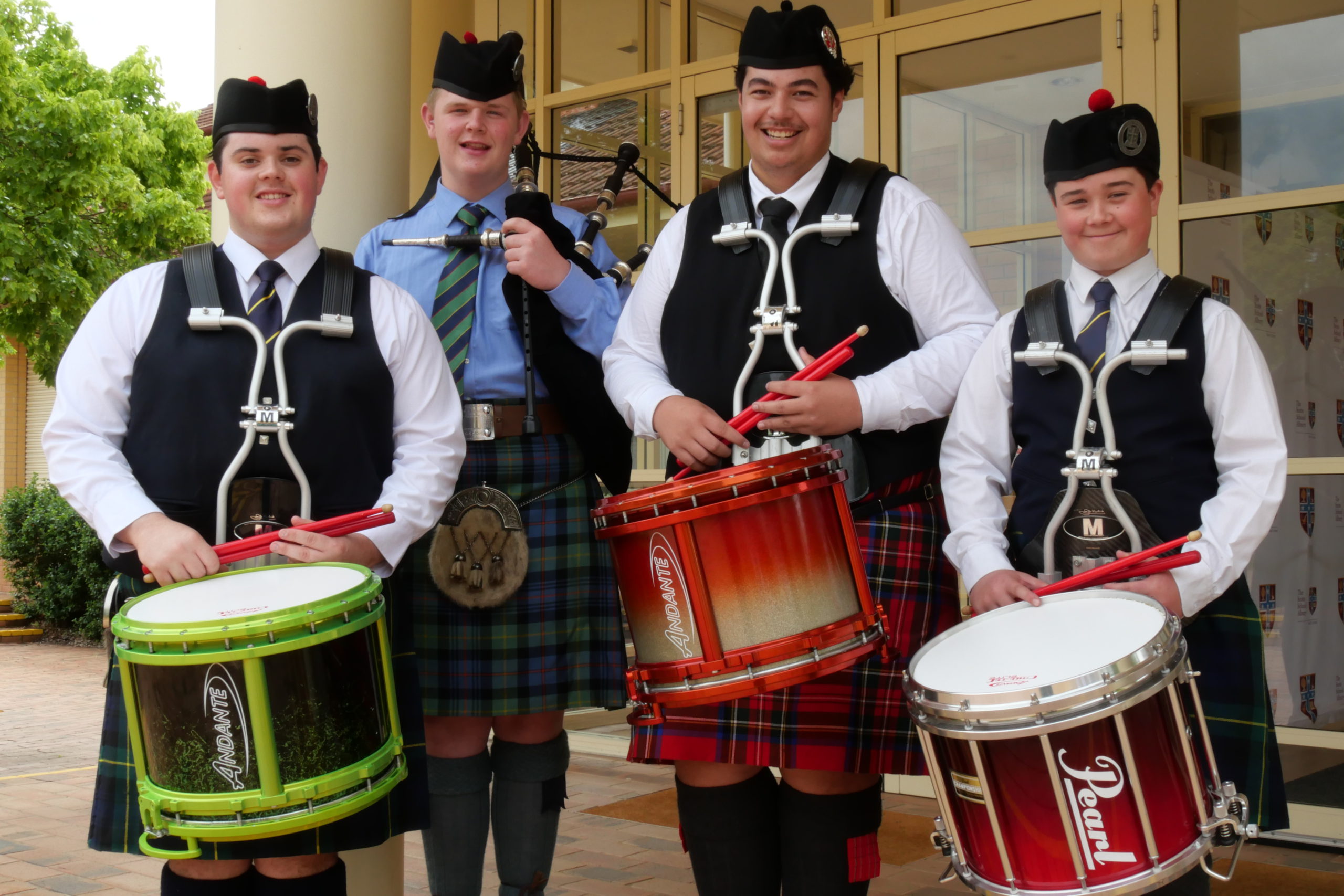 The Scots School Albury Pipe Band is back in competition mode with a vengeance after a Covid-pause, and Pipe Major Liam Nicolson and Drum Major Damon Wright are leading the way. Wright led a trio of drummers to become among the very best in the world following their outstanding success at the World Solo Drumming Championships in Glasgow recently and Nicolson competed on the world stage for outstanding results during a tour to Scotland in August.

In August, Nicolson excelled during a whirlwind tour of Highland Gatherings in Scotland. He placed fourth in the prestigious MacGregor Memorial Piobaireachd, an unofficial world championship for junior pipers.  Just to be accepted to play, Nicolson had to submit a formal application, including references and results. Judges selected the tune each Piper would play for the heats and another for the final. Nicolson played Queen Elizabeth 2nd in the heat followed by MacLeods Salute in the final. The 16-year-old was the second youngest piper in the contest and youngest in the final.

Wright also has been turning heads in Australia for his drumming. He was recently named Australian Young Drummer of the Year 2022 at a competition in Sydney and that followed hot on the heels of winning the Victorian B Grade Snare champion at the Victorian Solo Drumming Championships in Melbourne. The pair lead a talented bunch of pipers and drummers at Scots who are preparing for the World Pipe Band Championships in Scotland next year. It will be the first time the entire Pipe Band has been to Scotland since its performance at the 2017 Royal Edinburgh Military Tattoo, when Nicolson and Wright were 10 years old and in Year 5.  Back then, the students endured a brutal schedule of 27 night-time performances in 31 days, while keeping up their schoolwork from 9am-3pm each day. No concession was made for the students’ youth and they were expected to perform consistently and without compromise alongside adult pipe bands.

Overseas tours can be a tough initiation for many of the young students and to help build their perseverance and resilience for the world championships next year, Pipe Band co-ordinator Scott Nicolson recently led a tour to the Kuala Lumpur Highland Games in Malaysia. “We haven’t had much opportunity for competition during Covid, so it was good to get away with the band members to KL and just expose them to the vagaries of travel and competition,” Mr Nicolson said.

The band picked up first place in the Kuala Lumpur Highland Games Champion Mini Band and a third place in the Band contest. Young pipers and drummers also excelled with the following results: 1st D Grade and Champion Piper of the Day – Jonny Coe. 1st Novice Piper – Noah Boundy. 2nd Novice Piper – Neve Harris. 1st Novice Bass – Clancy Ledger. 3rd D Grade Snare – Storm Tanuvasa. The Scots School Albury will be hosting a Highland Games at the school on Saturday 11th March 2023. This will be followed by a Tattoo. Prospective stall holders can contact the school at the number below.