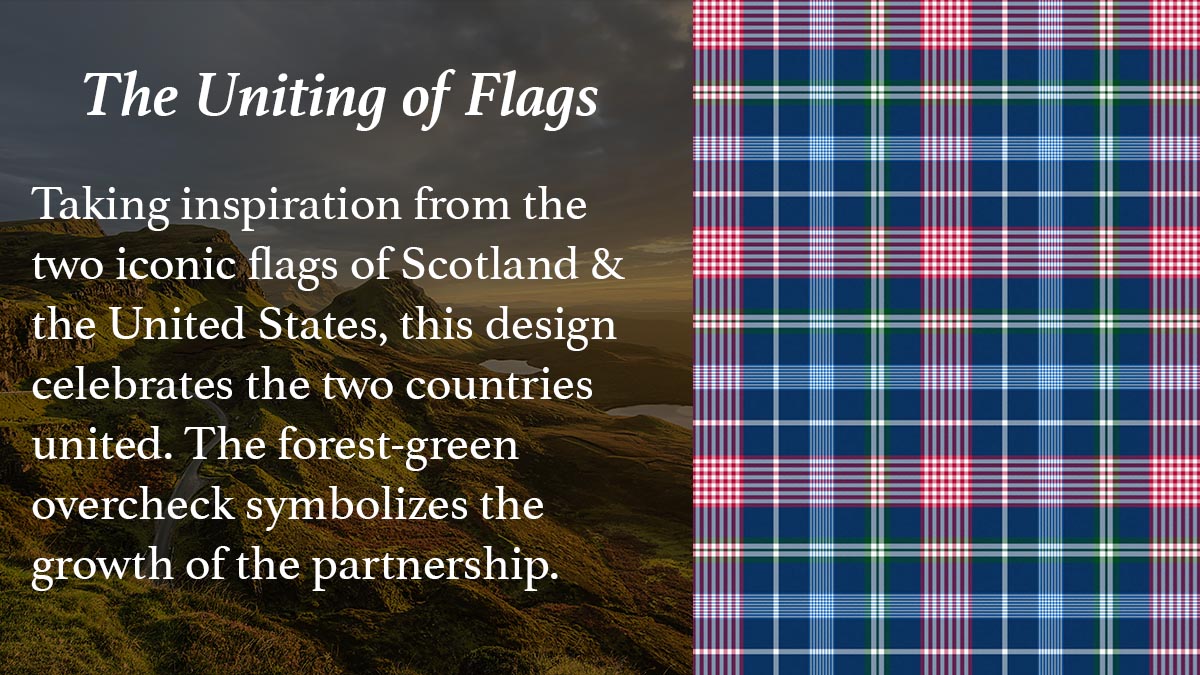 After opening its doors 224 years ago, the United States Consulate General in Edinburgh is launching an online poll and asking the Scottish public to help choose its official tartan.  One winner will be chosen among three designs, which incorporate colors and patterns influenced by the shared history between Scotland and the United States.  The poll closes Monday, November 21, with the winning design announced on St. Andrew’s Day, November 30.  Officials at the Consulate General partnered with acclaimed tartan designer Clare Campbell of Prickly Thistle, based in Evanton, north of Inverness, to develop the three options. The Consulate General’s winning design will be registered with the Scottish Register of Tartans, where it will be publicly accessible among thousands of other tartans.

Clare Campbell from Prickly Thistle said:   “I was delighted to work with the U.S. Consulate General on their tartan project.  Tartan is an expression of history, geography, and self-expression.  These designs are instantly recognizable as Scottish but help visually tell the story of the different ways America and Scotland are interlinked.  No matter the winner, Scotland will be welcoming a wonderful new tartan onto its national tapestry.”

The Consulate General’s team will seek to engage online audiences throughout the competition.  The winning tartan will form a distinctive part of the U.S. diplomatic presence in Edinburgh, symbolizing the deep connections between the United States and Scotland and boosting awareness of the Consulate General’s activities.

U.S. Ambassador to the UK Jane Hartley said: “Tartan is embraced internationally as a symbol of Scotland, and we are thrilled to be one step closer to finally having an official tartan to call our own.  All three designs up for a vote are representative of the deep historic and contemporary ties between the United States and Scotland.  I hope our tartan will come to symbolize the continued growth of our relationship.”

U.S. Consul General Jack Hillmeyer added: “The United States has maintained a diplomatic presence in Scotland since 1798, when President John Adams appointed the first U.S. Consul.  Since then, the ties between our nations have grown wide and deep.  Millions of Americans claim Scottish ancestry, including dozens of U.S. Presidents.  Americans harbor a deep love of Scotland, and the United States boasts more than 1,000 Scottish associations and clubs.  Hundreds of thousands of Americans visit Scotland annually, in addition to the thousands more who choose to study in Scotland each year.  We are proud to be Scotland’s principal international trading partner, and our bonds continue to grow in new and emerging industries.  This tartan aims to celebrate all we have in common with each other.”

The tartan poll can be accessed via the Consulate’s @USAinScotland Twitter page or by visiting https://bit.ly/3fSUWhs.