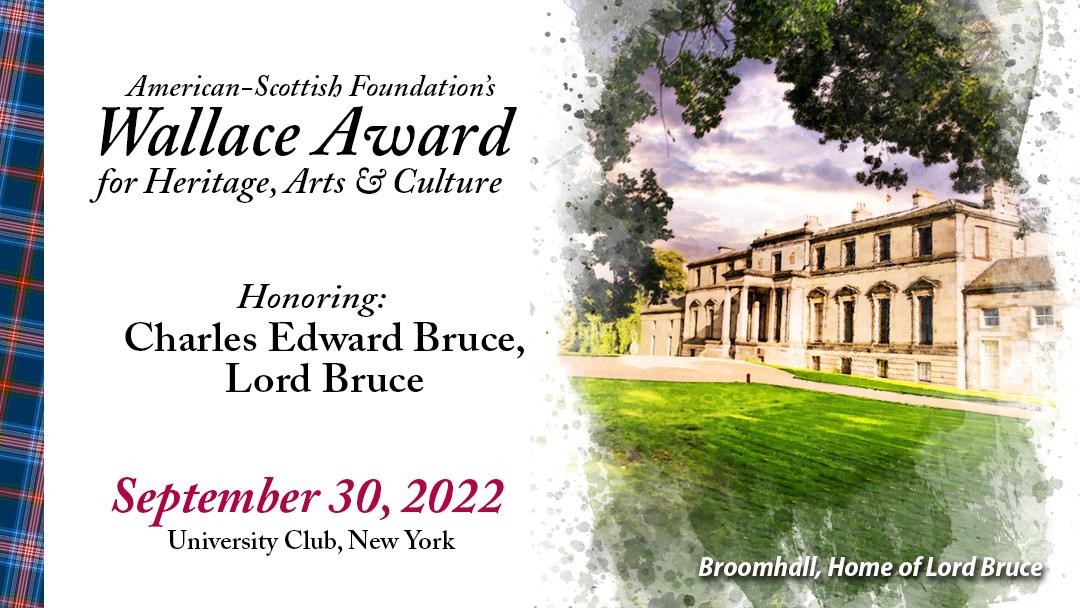 The American Scottish Foundation will host the Wallace Award Celebration on Friday September 30th at The University Club, New York. The evening will celebrate the 65th Anniversary of the Foundation and present Charles, Lord Bruce with the ASF Annual Wallace Award for his tireless support both in Scotland and internationally, of Scotland’s heritage, arts and culture.

Celebrating in true Scottish style, the evening will include an extensive silent on line and in person auction music from Noisemaker and the Highland Divas, whisky tasting with food oversight from Gary Maclean – Scotland’s National Chef. Proceeds will help support the ongoing work of the ASF Youth Bursary Awards program.

Charles Edward Bruce, Lord Bruce is eldest son and heir to Andrew Bruce, 11th Earl of Elgin & 15th Earl of Kincardine KT, 37th Chief of the Name of Bruce. He is active in the not-for-profit sector in Scotland and overseas. His interests include conservation of the built heritage, the fine arts, multiculturalism, education and the Scottish diaspora.  He is chairman of the Kolkata Scottish Heritage Trust which is running an urban regeneration project in Kolkata, India; and a trustee of the Scottish Lime CentreTrust.  He is president of The Democracy Forum, a leading policy forum for Asia. He is a governor of the Patrons of the National Galleries of Scotland. He is also patron of the Scottish Centre of Tagore Studies, the Japan Society of Scotland and the Association of Clans and Scottish Societies of Canada.

Lord Bruce is on the executive board of the Standing Council of Scottish Chiefs. He is President, Dunfermline United Burns Club, the world’s third oldest Burns club.  He is on the advisory board of the RAF Benevolent Fund, and also of the International Academic Forum (IAFOR).  He was awarded the Paolozzi Gold Medal  by The National Galleries of Scotland in 2012 for fundraising. He was educated at Eton College and the universities of St Andrews (MA Hons, 1984) and Dundee (MSc , 2013). He has been HM Deputy Lieutenant for Fife since 1997, and a member of the Royal Company of Archers, HM Queen’s Bodyguard for Scotland, Hon. Maj. 31 Combat Engineer Regiment (The Elgins), Canadian Forces and Hon. Keeper, Keepers of the Quaich.

Tickets are available at: https://americanscottishfoundation.com/events/2022-wallace-event.html