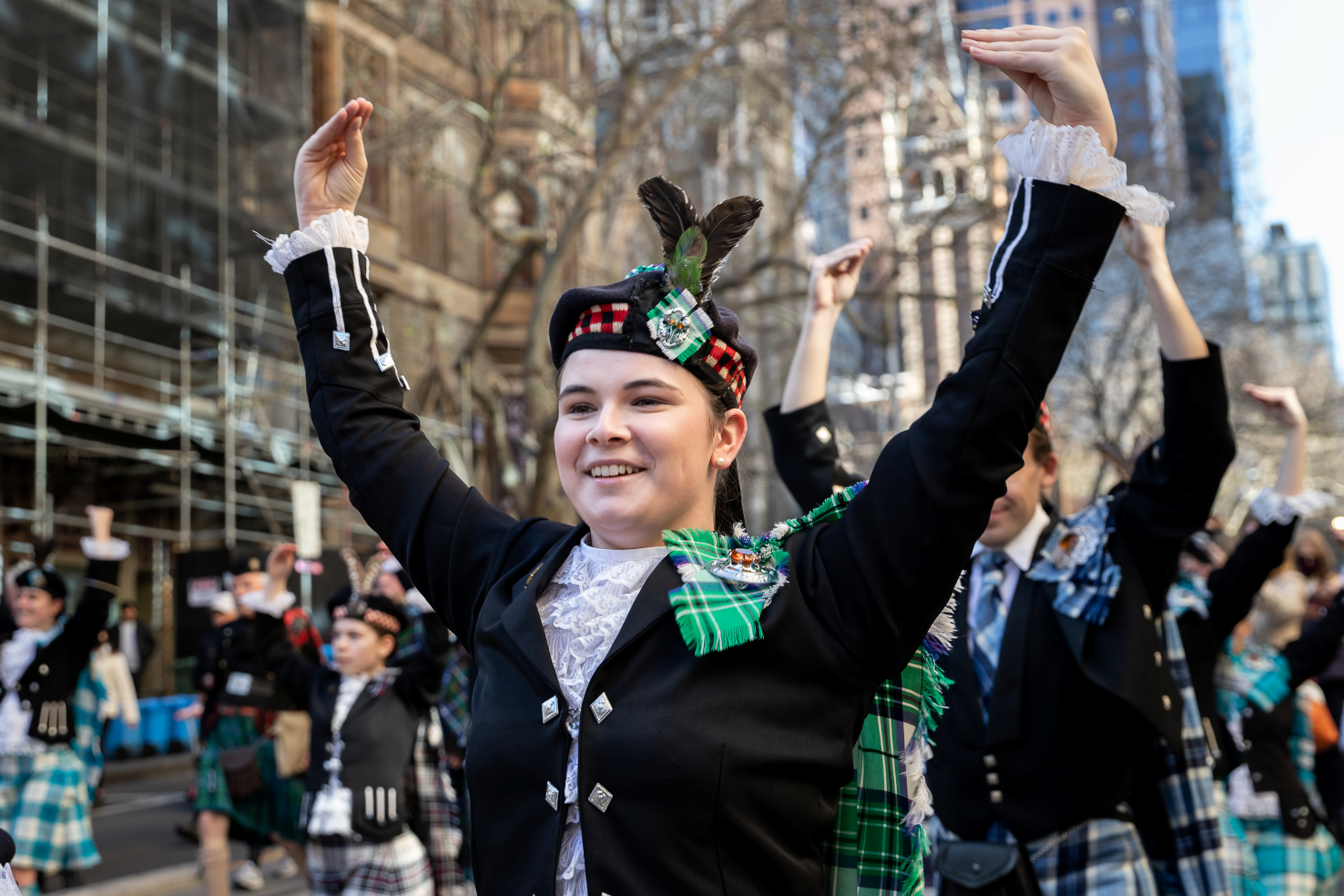 With a skirl of pipes, the Melbourne Tartan Festival opened in July with the annual Kirkin’ ‘O The Tartan service at The Scots’ Church, Melbourne, live-streamed for those not able to attend in person.  The Parade of Clans was piped into the church by Presbyterian Ladies College pipers Sherry Li and Annette Chen, with each Clan being announced and welcomed in both Scottish Gaelic and English.  Whilst a small number of our events were cancelled or rescheduled due to Covid, most were able to go ahead with record attendances. Kenneth Park, curator, cultural historian and tour leader, hosted a virtual online tour, Some of My Favourite Scottish Islands– including Skye, St. Kilda, Staffa, Iona, Inveraray, Hebrides and many more, which was enjoyed by guests from the comfort of their own homes.

A special tour of the historic Scots’ Church (1874) and the adjoining Assembly Hall (1915) offered insights into the rich history of these two wonderful landmark city buildings. The ‘Scottish Connections’ CBD walking tour lead by Kenneth Park, visited some of Melbourne’s fine streets, monuments and buildings which owe much to Melbourne’s early settler connections with Scotland.  The 2022 Victorian Pipers Association Solo Championships attracted a high number of entries this year after a Covid induced two-year hiatus.  The level of competition was of a very high standard, adjudicated by guest judges Greg Wilson of New Zealand and Martin Frewen, originally from New Zealand, now residing in Sydney.  The 2022 Australian Gold, Silver and Bronze Piobaireachd Medallists were awarded to: Gold Medal: Jamie Hawke, Silver Medal: Matt Gervasoni and Bronze Medal: Liam Nicolson.

Transported the audience to Scotland

Sisters Tess and Luisa Hickey lead the traditional Scottish Jam session at an iconic Melbourne pub and were joined by some of Melbourne’s best Scottish players. The musicians transported the audience to Scotland with a toe-tapping mix of best-loved traditional tunes and popular contemporary ones.  Tess and Lulu are highly talented, emerging young artists and have been longstanding members of the Melbourne Scottish Fiddlers and have recently formed their own band, Apolline.  Look out for them at folk festivals around the country! The Victorian Scottish Dancing Members Association 61st Australian Commonwealth Championships received a record number of entries, with a high level of competition adjudicated by Judges Amanda Skidmore, QLD, Justine Daly, NSW and Kim Roe, TAS.  Congratulations to all competitors, winners and place getters.

Easy Steps to Speaking Gaelic guests were immersed in everyday Gaelic, music and culture.  They learned a few basic words, phrases and greetings in Gaelic and about the life of Gaelic speakers in times past. The class was conducted by members of the Scottish Gaelic Society of Victoria, which was founded in 1905. The audience of Scottish Migration Stories author talks was transported back in time by performer, writer and broadcaster Michael Veitch, as he recounted the voyage of the Ticonderoga from his aptly named book Hell Ship.  Dr. Bill Fleming, family historian and Melbourne surgeon, explored the reasons his ancestors made their life changing journey from Edinburgh to Port Phillip and family historian and author Margaret Fleming shared her experience as a researcher. providing a practical guide to assist family historians to collate their research documents into a format ready to publish.

Hawthorn Pipe Band’s ‘Legacy’ Concert’ was a special music tribute with an almost honour of the band’s long serving Drum Major the late Bob Semple.  A near capacity audience witnessed the band at their best.  They were joined by special guests, Scotch College Pipes and Drums and Ballarat Grammar Pipe Band, with vocalists Simon Gibson and Year 11 Ballarat Grammar student Amy Schreenan.  MC extraordinaire was Claymore lead singer, William (Willy) Hutton. Robert J.K. (Bob) Semple OAM BEM (1920 – 2020), was a World War II veteran who subsequently became a member of the Hawthorn Pipe Band for 74 years. Bob fought for 6 years in WW2, including as a “Rat of Tobruk”, at El Alamein, and in the Pacific. During his six years he had just a few short weeks home in Australia and completed a phenomenal 1245 days in active combat. By the time the war finished, he was the only man left fighting from his original crew.

A Haggis Supper served with a modern twist, was a sell-out event hosted by Elisabeth and Colin Paterson of Kilted Haggis.  A piper and snare drummer added to the authentic atmosphere, helped no doubt by a whisky tasting.  Diners were surprised and delighted to taste the many variations of haggis finger food.  Much to everyone’s delight there was even a marriage proposal on the night!

Collingwood Town Hall Ballroom resounded to the music of the Melbourne Scottish Fiddle Club at the Melbourne Tartan Festival Ceilidh Dance.  Guests quickly shrugged off their winter coats and took to the dancefloor for the first time in two years, whooping with joy and laughter as they joined hands and danced around the room as the Caller took them through the various steps, some for the very first time.

With a sense of relief, we woke to sunny, clear blue skies on the morning of The Melbourne Tartan Day Parade.  In the lead up to the parade a morning pop-up performance by the City of Melbourne Highland Pipe Band in Melbourne’s Bourke Street Mall attracted a large crowd of enthralled city shoppers, whilst at the other end of the city, Watsonia RSL Pipe Band played in Gordon Reserve.   There was Highland Dancing on the terrace of the Old Treasury Building, while The Robert Burns Club of Melbourne held poetry readings beside Robert Burns’ statue in the adjacent Treasury Gardens.  The plaintive sound of the pipes echoed across the city as five pipers played in unison on the balconies of the Old Treasury Building, bringing a tear to many an eye.

Then it was time for over 200 plus massed pipers, drummers and Highland Dancers, to march in the Melbourne Tartan Day Parade down Collins Street, one of Melbourne’s major thoroughfares.  The Parade was led by the Hon. Ted Baillieu, Chieftain of Pipe Bands Victoria (and former Premier of Victoria), Mr. Hamish Tadgell, Chair of the Victorian Scottish Heritage Cultural Foundation (VSHCF) and Mr. Reg Davis, Chair of Scots of Victoria Coordinating Group (SVCG).  The finale of the Parade was a massed pipe band recital and mass Highland Fling under the portico in the forecourt of The Westin Melbourne, to the delight of guests and spectators. The acoustics were spine tingling!

We gratefully acknowledge the support of the Victorian Scottish Heritage Cultural Foundation (VSHCF), the Scots of Victoria Coordinating Group (SVCG) and the many Victorian Scottish Community groups who participate, without whom The Melbourne Tartan Festival would not be possible. We look forward to welcoming you to the Melbourne Tartan Festival in 2023.

For more details on the Melbourne Tartan Festival see: www.melbournetartanfestival.com.au