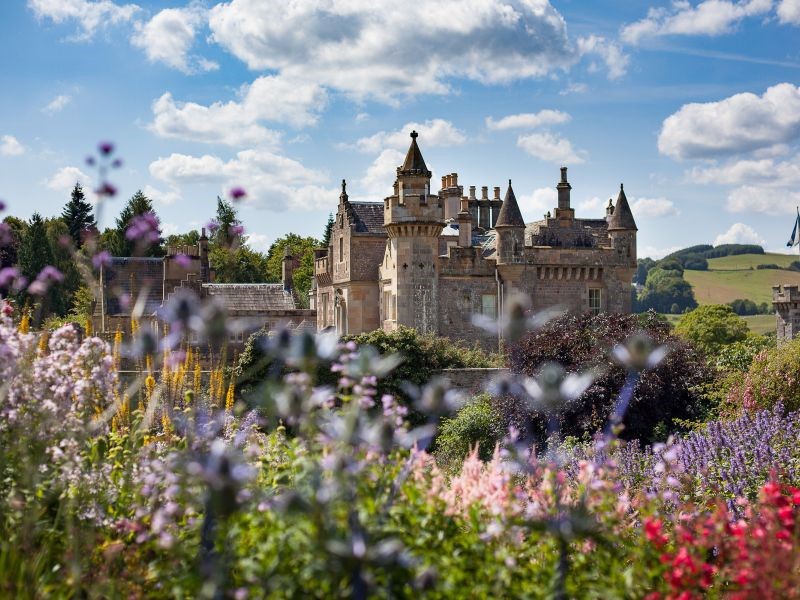 If you’re coming to Scotland’s capital, Edinburgh, to enjoy one of its many festivals this month, you’ll soon see why it’s a UNESCO World Heritage Site, as well as one of Britain’s greatest foodie and nightlife hotspots. And with gorgeous beaches, romantic castles and the vibrant buzz of Glasgow all only an hour away, you’ll be able to experience the country’s diverse landscapes, history and culture too, all within easy reach of a day trip.

Picturesque coastlines in the east and rugged hills and moorlands in the west greet you at the Scottish Borders (bordering northern England), all of which is easily reached thanks to the Borders Railway, which connects Edinburgh and the Borders town of Tweedbank in less than an hour. Have your camera at the ready on this lovely rail journey as you pass by iconic architectural gems such as the Lothian bridge and Redbridge viaducts. Alight at Tweedbank to visit Abbotsford House, the home of famed writer Sir Walter Scott. This romantic mansion was built during the early decades of the 19th century and very much reflects the tastes of one of this era’s most prominent authors. Close by is the attractive town of Melrose, which is not only the home of the magnificent 12th century Melrose Abbey, but also to two National Trust for Scotland gardens. Priorwood Garden houses Scotland’s only dedicated dried flower garden and Harmony Gardens features a beautiful walled garden with breath-taking views over the abbey and the nearby Eildon Hills.

Did you know that Edinburgh, the capital, and Scotland’s largest city, Glasgow, are only an hour apart? A lively, creative city, Glasgow is renowned for its mighty industrial heritage and world-class shopping as well as its vibrant arts, culture and music scene; it’s even a designated UNESCO City of Music! Discover why it won this status on a Glasgow Music City Tour, while fans of street art should check out Glasgow’s first dedicated tour to the genre, the City Centre Mural Trail. Football lovers can take tours of the world-famous Rangers and Celtic Football Clubs, while you can discover the city’s artistic and industrial legacy at a host of inspirational museums such as the Kelvingrove Art Gallery & Museum, the Hunterian Museum and Art Gallery at the University of Glasgow and the Riverside Museum of Transport and the Tall Ship on the banks of the River Clyde.

In just half an hour by train you can swap Edinburgh’s cityscapes for coastal relaxation. North Berwick and its stretches of golden sands are spectacular – and if it’s glorious views you’ve come for, you won’t be disappointed. Sweeping vistas look out to Bass Rock, home to the world’s largest northern gannet colony, and to the Forth Islands. Take a boat trip out to the islands for an even closer inspection, while bird lovers should also pay a visit to the town’s Scottish Seabird Centre. Alternatively, if you fancy a game of golf overlooking these wonderful coastal scenes, tee off at either of the town’s excellent links courses, the Glen Golf Club and the North Berwick Golf Club.

The town itself is home to a fine collection of cafés, bars and shops, from vintage-style tearooms to stylish coffee shops…also make sure you hit the fish and chip shops and ice-cream parlours, it’s tradition at a British seaside resort! For heritage seekers, don’t miss the 14th century fortress Tantallon Castle and Dirleton Castle, which houses some of the oldest castle architecture in Scotland.

If you’ve ever watched the film Braveheart, you’ll want to visit Stirling. The iconic National Wallace Monument, which overlooks the scene of Scotland’s victory at the Battle of Stirling Bridge, gives a fascinating insight into the world of Scottish hero William Wallace. History pulsates through every inch of Stirling; explore the streets of the medieval old town, encounter intriguing royal history at Stirling Castle, and even see the world’s oldest football at the Smith Art Gallery and Museum. Perhaps one of the most absorbing attractions that tells the stories of the area’s past is the Battle of Bannockburn Experience. This 3D, immersive exhibition takes you into the heart of one of Scotland’s most historic battles, ending with a visit to the Battle Room where visitors can take part in the interactive battle game. And, if you’re a fan of the hit TV show Outlander, take the time to visit Doune Castle. Located around 15 minutes out of town, multiple scenes from the popular series were filmed at this splendid castle, as they were for Game of Thrones and Monty Python and the Holy Grail.

South of Edinburgh, on the banks of the River Tweed, lies Peebles, a small, attractive town with a distinctly artistic vibe, that’s framed by gorgeous countryside scenery. Scottish novelist John Buchan, author of The Thirty Nine Steps, made his home here and a picturesque 13-mile walking route is named after him, the John Buchan Way. Alternatively, head out hiking in Glentress Forest, which is also brilliant for mountain biking, as its trails are one of Scotland 7stanes (seven mountain biking centres in southern Scotland). Despite its size, Peebles boasts a number of art galleries and studios and its historic past is prevalent on every corner; ancient relics are dotted across town, from the ruined Cross Kirk to an old Mercat Cross (which depicts a town’s right, granted by a monarch or baron, to hold a regular market).

Rosslyn Chapel – Discover intricate carvings and unique stonework at one of the most intriguing places of worship in Scotland, in the village of Roslin, 30-minutes’ drive from Edinburgh. Discover its story from its founding in the 15th century to its depiction in the novel and subsequent film The Da Vinci Code.

Musselburgh – Step into the past at this historic market town that derives its name from the mussel beds found on nearby shores. It’s also home to the oldest racecourse in Scotland – which hosts many race meets throughout the year – as well as to the historic nine-hole Musselburgh Links golf course, which has royal connections going back to the early 16th century.

Linlithgow Palace – Explore royal history at the birthplace of Mary Queen of Scots, a palace that was once a stopping point for royalty enroute between Edinburgh Castle and Stirling Castle. Visit in the summer to enjoy its annual jousting spectacle.

Text and images courtesy of VisitBritain.