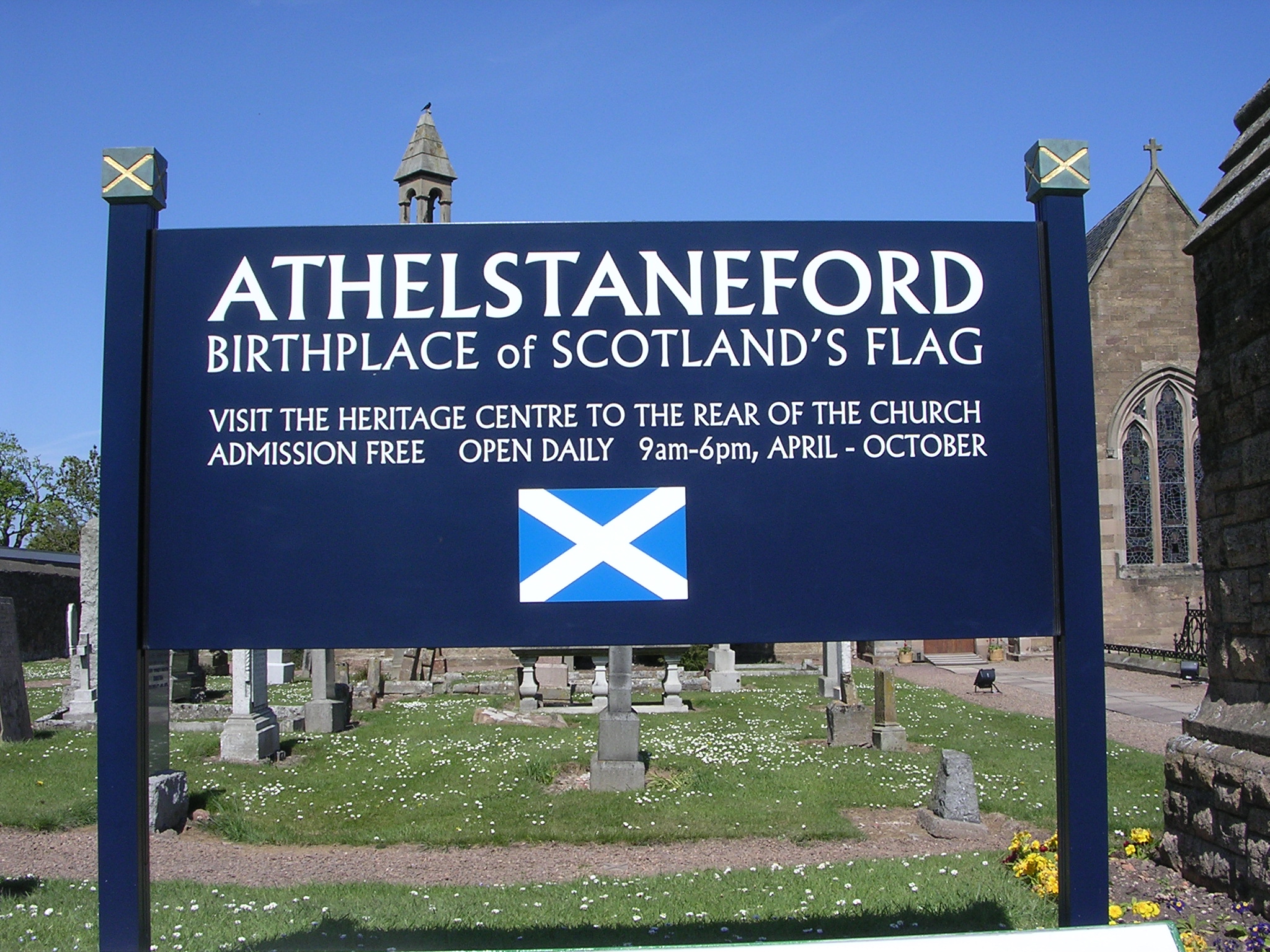 Scotland’s flag heritage centre has re-opened in the East Lothian village of Athelstaneford the birthplace of Scotland’s flag. The centre, housed in the 16th  century Hepburn doocot, tells the story of the battle of Athelstaneford where legend has it a white saltire appeared above an army of Picts and Scots inspiring them to victory. The successful £100k restoration has secured the building for the future with extensive exterior repairs carried out by specialists using traditional techniques.

The project is the first in a series of major improvements planned for the birthplace of Scotland’s flag. David Williamson chair of the Scottish Flag Trust said: “This has been a major project and great to see the building restored and looking its best. With the building secure we hope the public will get behind our funding drive at www.saltire.scot to radically improve the birthplace of Scotland’s flag.”

The St Andrew’s Cross or Saltire is Scotland’s national flag. Tradition has it that the flag, the white saltire on a blue background, the oldest flag in Europe originated in a battle fought in East Lothian, near the village of Athelstaneford. Today the flag flies proudly all year round from the Saltire Memorial in Athelstaneford Parish Churchyard to celebrate this special connection. The history of the battle and the adoption of the Saltire as the symbol of Scotland is told in the Flag Heritage Centre through a unique audio-visual presentation. The Scottish Flag Trust promotes the Saltire as a welcoming symbol for all Scots whether they are Scots by birth, by choice or through their family roots.

The Scottish Flag Trust is a registered Scottish charity which maintains the Saltire Memorial and the Flag Heritage Centre at Athelstaneford and promotes the proper use of the Saltire. The restoration and renewal project will see a new accessible pathway with interpretive timeline telling the history and adoption of Scotland’s national flag from 834AD to the present.  New landscaping and engraved paving around the Saltire Memorial will tell the story of St Andrew’s and Scot’s societies across the globe.  A new immersive audio-visual experience telling the story of the Battle of Athelstaneford and the creation and adoption of Scotland’s national flag.

Legend of the Saltire

The St Andrew’s Cross or Saltire is Scotland’s national flag. Tradition has it that the flag, the white saltire on a blue background, as the oldest flag in both Europe and the Commonwealth, it originated in an East Lothian battle which took place in the year 832AD. An army of Picts under Angus mac Fergus, High King of Alba, and aided by a contingent of Scots led by Eochaidh (Kenneth mac Alpin’s grandfather) had been on a punitive raid into Lothian (then and for long afterwards Northumbrian territory), and were being pursued by a larger force of Angles and Saxons under one Athelstan.

The Albannach/Scots were caught and stood to face their pursuers in the area of Markle, near East Linton. This is to the north of the modern village of Athelstaneford (which was re-sited on higher ground in the 18th century), where the Peffer, which flows into the Firth of Forth at Aberlady forms a wide vale. Being then wholly undrained, the Peffer presented a major obstacle to crossing and the two armies came together at the ford near the present-day farm of Prora (one of the field names there is still the Bloody Lands).

Fearing the outcome of the encounter, King Angus led prayers for deliverance and was rewarded by seeing a cloud formation of a white saltire (the diagonal cross on which St Andrew had been martyred) against a blue sky. The king vowed that if, with the saint’s help, he gained the victory, then Andrew would thereafter be the patron saint of Scotland. The Scots did win, and the Saltire became the flag of Scotland. When Kenneth mac Alpin, who may have been present with his grandfather at the battle, later united Picts and Scots and named the entity Scotland, Andrew did indeed become the patron saint of the united realm. Kenneth mac Alpin, King of Scots and Picts, Ard-righ Albainn, was laid to rest on Iona in 860AD.