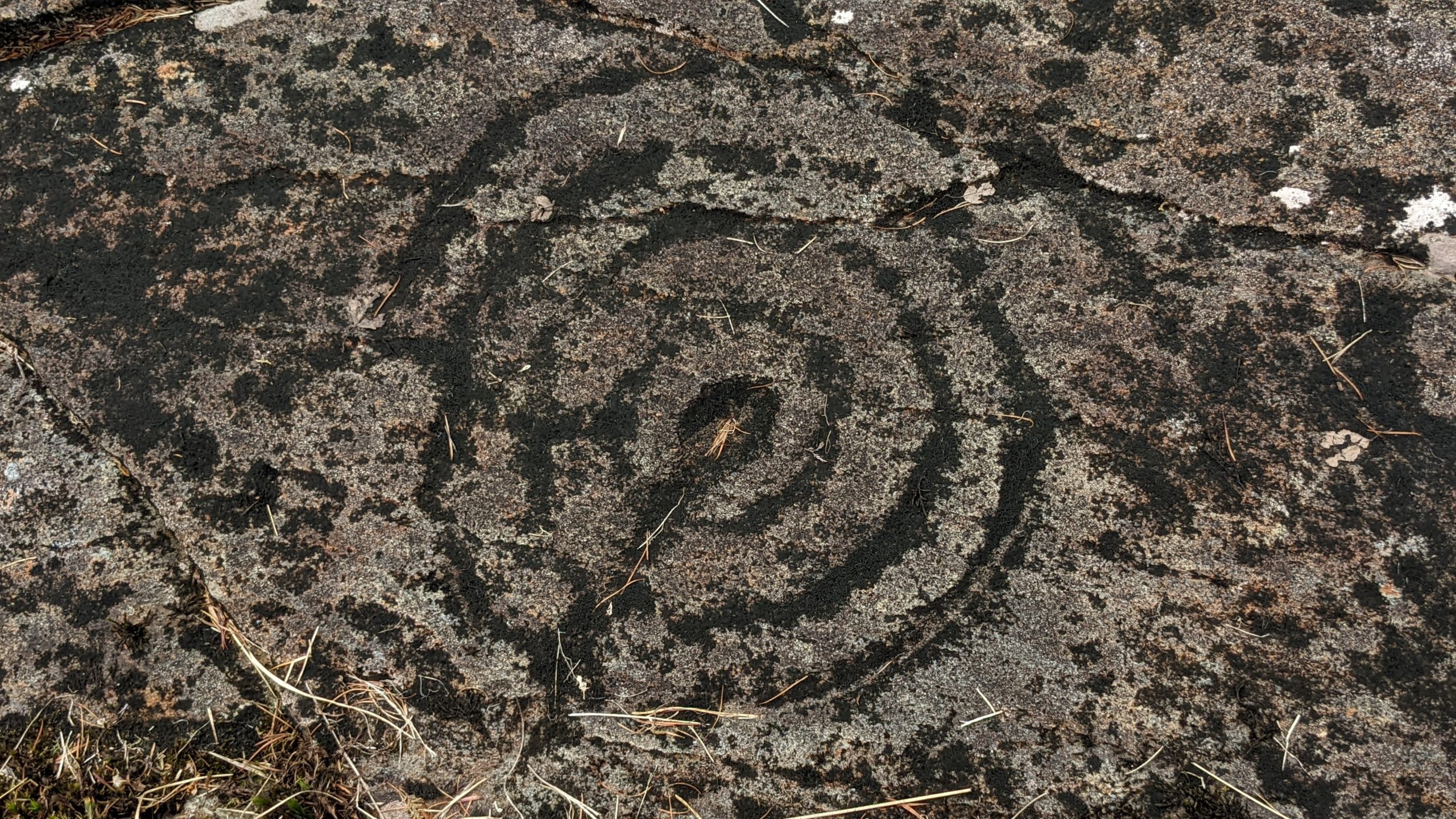 Motifs and symbols are some of the most enduring and intriguing remnants of the past for historians and archaeologists to study. Unlike structures, they can endure long after any individual site has been reduced to dust. Deciphering a motif’s meaning keeps many such experts up at night, but there is more to it than just the ‘how’ or ‘why’. Understanding and reinterpreting past symbols, I believe, brings us close to the essence of ancient lives precisely because we can’t help but make them our own, just as past peoples would have.

One of the most prevalent types of motifs in Scotland are variations on cup and cup-and-ring rock art. These simple designs consist of a ‘cup’ or bowl-like depression carved into a stone surface, sometimes surrounded by layers of ‘rings’. These symbols pop up around the world. While they’re most strongly associated with the north-west seaboard of Atlantic Europe, they can also be found in Scandinavia, Alpine valleys, and the Aegean Sea. Similar patterns of rock art, though with important distinctions, have been found in Australia, Central Asia, Hawaii, India, Mexico, and more.

More than 3,000 rock art sites, many of them bearing cup or cup-and-ring marks, are known in Scotland today. They were made between 4,000 – 2,500 BCE, and re-used in various ways well into the Bronze and Iron Ages (and, as we’ll see soon, much more recently). There are several especially dense clusters, including around Loch Tay, but no historic landscape quite brings them to life like Kilmartin Glen in Mid-Argyll. Specific locations of note in the area include Achnabreac (also spelled Achnabreck), Ormaig, and Kilmichael Glassary.

Recent research by Scotland’s Rock Art Project (ScRAP) has shed light on the relationship of rock art to the wider landscape. Most rock art sites are located on gentle slopes facing south, ensuring greater sun coverage and coinciding with areas most favourable for prehistoric settlement and agriculture. As in Kilmartin, many instances of rock art are not visible from far away. In fact, they are often found away from obvious paths, suggesting that they were not intended to be landmarks or obvious statements of power but were perhaps more intimate, with only those in the local community or those bearing special knowledge knowing their location.

A handshake between tiers of the cosmos

Creating cup-and-ring marks was laborious, but not as intensively as you might think. Experimental archaeology has shown that a simple cup-and-ring design can be made on the surface of softer rocks like sandstone using stone and bone tools in thirty to ninety minutes. Softer stones don’t last as long against the forces of erosion, however, so most examples of rock art found in Scotland today are ‘pecked’ into harder rocks like schist. Pecking marks on tougher rocks takes longer, but a single cup-and-ring mark can still be made within a single day. The act of creating rock art was likely itself ceremonial, an event meant to create a common memory and spectacle for the community. While standing around listening to the repeated tap-tap-tapping of someone pecking a design into stone might not sound like thrilling entertainment to us today, a greater appreciation can be gained for such communal events by considering prehistoric cosmology.

A common way of perceiving existence in prehistoric societies the world over was as a three-tiered universe: the realm above (sky), the realm here (earth), and the realm below (netherworld). Within this cosmology, certain stones, metals, and minerals like quartz were considered ‘alive’ in the sense that they were believed to have come from one tier into another, ours. In this way, pecking designs into stones can be understood an interaction with another realm. The rhythmic sounds produced are not so different from shamanic chanting or drumbeats. The morphing of the raw material of stone, and even things like the bright green colour produced fleetingly by striking quartz, were expressions of that relationship – a handshake between tiers of the cosmos.

In a 1971 article in the Proceedings of the Society of Antiquaries of Scotland, Ronald Morris makes a fascinating observation about how symbols change their form and meaning over time. The cross has been a symbol of Christianity for 2,000 years, but a red cross now means ‘medical aid’; a white cross on a red background means ‘Switzerland’; a Victoria Cross means ‘bravery’, and so on. Like crosses, cup-and-ring rock art has variations in form, context, and position – the precise meaning of each is simply unknown to us. A cup-and-ring mark on a south-facing slope may or may not have meant something different than a cup-and-ring mark etched onto a standing stone, which may or may not have meant something different than one removed from its original location and added to a later cairn, boundary fence, or domestic hearth.

In Kilmartin Glen, something I found fascinating is how the modern community has clearly embraced the motifs. They are seen everywhere from children’s drawings in chalk to decorations in windows to signposts for local companies on roadsides. Symbols first created up to 6,000 years ago are still being created, displayed, and innovated upon – isn’t that extraordinary? One particular example of this stands out. The focal point of Kilmartin Glen is the ‘Linear Cemetery’, a series of burial cairns laid out in a line across the floor of the glen. One of these cairns, Nether Largie Mid Cairn, was almost wholly reconstructed following excavations in 1929. To enter the cairn – which, historically, was not intended to be entered – you must climb atop the pile of stones and go in through a metal hatch and ladder. The stone ledge in front of the ladder is adorned with a cup-and-ring motif likely carved at the time of reconstruction.

The ‘original’ cairn had no such marking, but now it does. The design was familiar to the cairn builders, but used here in a new way as an entrance marker. It’s not strictly accurate to how cup-and-ring marks were once used, but it speaks to the spirit of the place in a way that makes visitors dwell on the connective themes of ancient Kilmartin. It was made by people a century ago, and now seen and stepped over by people today and photographed by smartphones. Each person who sees it decides for themselves how to interpret it, and it’s this adaptability that makes the cup-and-ring design such a timeless symbol.

Back home in central Edinburgh following a week-long stay in Kilmartin Glen, a funny thing began happening. I started seeing cup-and-ring marks everywhere: in the vaguely concentric pattern on a coffee shop’s napkins; on a fence cordoning off a building site adorned with the builders’ ripple-like logo; and in the splashes made by raindrops in the pools forming in pockets along the street outside my flat.  The universal simplicity of the design means it can manifest just about anywhere, far from any stone that bears them. They linger not just on smooth stone canvases, but in the mind. That, ultimately, is where the stuff that connects us all as humans dwells. So, wherever you may be in the world, look out for cup-and-ring marks – in the clouds, in the foam of your coffee milk, in the ethereal moments between sleep and wakefulness – and in doing so, become part of a more than 6,000-year-old tradition of motifs and imagination.