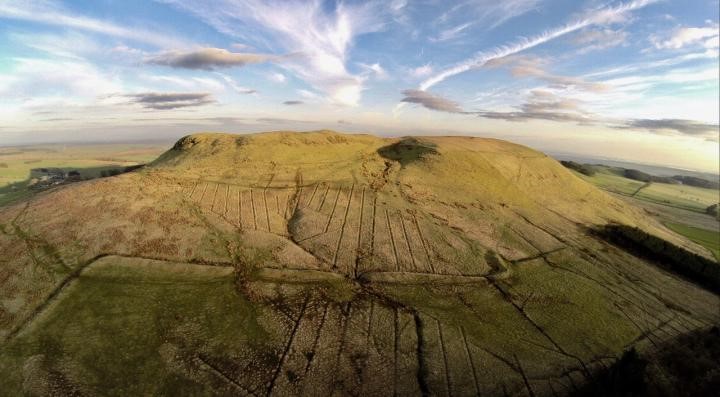 Archaeologists from Edinburgh have discovered more than 100 Iron Age settlements in south-west Scotland that date from the time of Roman occupation. The team has been surveying an area north of Hadrian’s Wall to better understand the impact of Rome’s rule on the lives of indigenous people. Researchers explored nearly 600 square miles around Burnswark hillfort, Dumfries-shire, where Roman legions campaigned as the Empire expanded northwards. Previous archaeological research in terrain between Hadrian’s Wall and the Empire’s more northerly frontier at the Antonine Wall had focused predominantly on the Roman perspective. It had concentrated on the camps, forts, roads and walls that the Rome’s empire built to control northern Britain – rather than sites associated with native tribes.

The new study initially focused specifically on Burnswark – home to the greatest concentration of Roman projectiles ever found in Britain, and a testament to the firepower of Rome’s legions. The research team went on to scour an area of 580 square miles beyond the hillfort, using the latest laser-scanning technology. Although much of the area had been studied before, researchers found 134 previously unrecorded Iron Age settlements — bringing the total number known in the region to more than 700. The survey’s discovery of so many small farmsteads is a significant finding, researchers say. Such settlements offer key insights into how the majority of the indigenous population would have lived. Analysis showed sites were dispersed evenly across the landscape — with dense clusters in some places — suggesting a highly organised settlement pattern, researchers say.

Work on Hadrian’s Wall began in AD 122 and, for two decades, the defensive fortification between the Solway Firth and the River Tyne marked the northernmost border of the Roman empire. In AD 142, having made further gains north, the Romans built a second defensive line called the Antonine Wall between the Firth of Forth and the Firth of Clyde. A few decades later, however, this second wall was abandoned with the Empire drawing its frontier back south to Hadrian’s Wall. The findings of this latest study by the University of Edinburgh, Historic Environment Scotland and the Scottish Universities Environmental Research Centre have been published in the journal, Antiquity. The study is part of a wider project called Beyond Walls, which is seeking to shed light on ancient sites, stretching from Durham in the south to the fringes of the Scottish Highlands in the north.

Study author Dr Manuel Fernández-Götz, of the University’s School of History, Classics and Archaeology, said: “This is one of the most exciting regions of the Roman Empire, as it represented its northernmost frontier. The land we now know as Scotland was one of very few areas in Western Europe over which the Roman army never managed to establish full control”.

Fellow author Dr Dave Cowley of Historic Environment Scotland said: “The discovery of so many previously unknown sites helps us to reconstruct settlement patterns. Individually, they are very much routine, but cumulatively they help us understand the landscape within which the indigenous population lived.”