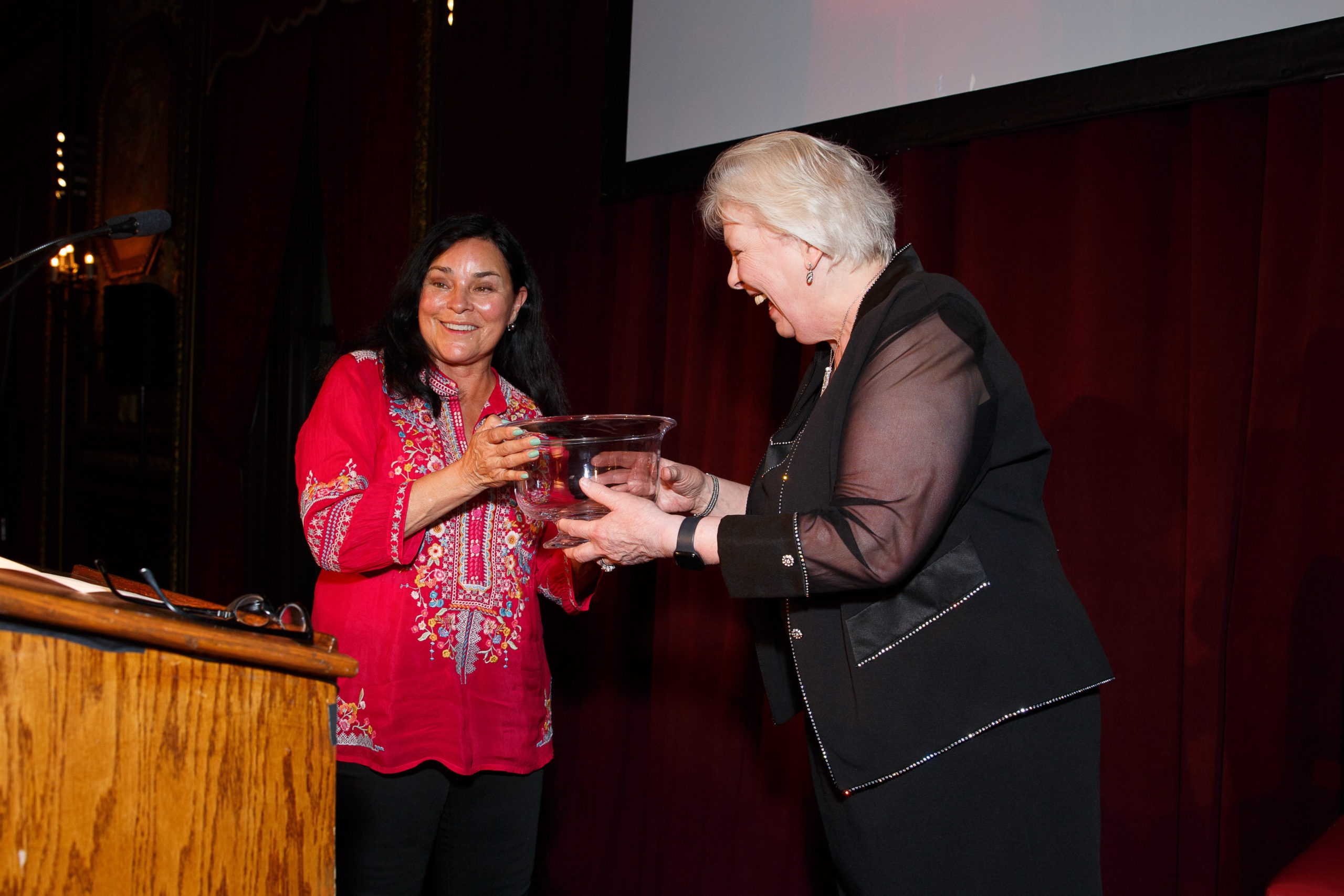 The National Trust for Scotland Foundation USA’s annual gala, A Celebration of Scotland’s Treasures, drew tartan-clad philanthropists to New York City’s The Metropolitan Club in April, when American author Diana Gabaldon was honoured as the 2022 Great Scot. Gabaldon’s bestselling Outlander novels have brought the romance and drama of Scottish history to life for more than 50 million readers worldwide. They are also the inspiration for the Starz television series of the same name.  The presentation of the Great Scot Award was the highlight of the event, which this year raised $375,000 to support the conservation of heritage sites in the care of the National Trust for Scotland, including Culloden Battlefield and Robert Burns’ birthplace.

Actors Sam Heughan and Graham MacTavish, stars of the Starz television series Outlander, presented the award to Gabaldon virtually from the United Kingdom, where they were filming. MacTavish noted, “Now it’s true that Diana herself is not Scottish, but I don’t think any of us can deny that Diana has done more than almost anyone to promote Scotland, its history and culture, on the world stage over the past decade. For that reason, I think, and I am sure you will agree, that Diana is surely an honorary Scot – and now a Great one at that.”

In accepting the award, Gabaldon made humorous and heartfelt remarks about the origins of her first novel, public reaction to the series, and her unanticipated role in preserving Scottish culture. Gabaldon had never been to Scotland before writing Outlander, and she shared that the Gaelic phrases used in her early books came directly from a Gaelic-to-English dictionary. After a Scottish scholar suggested as much, Diana developed a close relationship with him and incorporated more authentic phrasing in her later novels. Today, the Outlander series is recognized as contributing to a revival of interest in the Gaelic language and Highland culture.

An evening in true Scottish fashion

Kirstin Bridier, Executive Director of the Foundation, noted the parallels between Gabaldon’s role in promoting Gaelic and the work of 20th century American folklorist Margaret Fay Shaw who, together with her British husband John Lorne Campbell, made early audio and video recordings of daily life in the Hebrides in order to capture the language, folksongs, and traditions of the islands before they were lost to time. Providing access to Shaw’s remarkable collection, which is housed in her former home on the Isle of Canna, southwest of Skye, is the focus of the Foundation’s fundraising efforts this year.

A Celebration of Scotland’s Treasures was chaired by arts philanthropist Naoma Tate, whose great-grandfather was a master stonemason at Drumlanrig, home of the Duke of Buccleuch. Mrs. Thomas H. Hubbard and Jeannie Redpath Campbell Becton served as honorary co-chairs in recognition of their leadership support for the Isle of Canna over the past decade.  Guests were welcomed with a cocktail hour, including tastings by The Macallan, the official whisky of NTSUSA, and Rock Rose Gin, a multi-award-winning gin created by Dunnet Bay Distillers and with music by Skye Trio and Special Guests.  A silent auction featured opportunities to stay at luxury hotels The Fife Arms and Schloss Roxburghe; Scottish textiles from Begg X Co and Araminta Campbell; fishing with Orvis; jewelry from Edinburgh’s Hamilton & Inches; and a signed, hardbound set of the entire Outlander series.

Alasdair Nichol, Chairman of Freeman’s auction house and a frequent appraiser on PBS’s Antiques Roadshow, charmed 200 guests with a rousing live auction that included a week-long stay at Tulach Ard, a Highlands country house lovingly restored by ANTA designers Lachlan and Annie Stewart; a bronze maquette of sculptor Andy Scott’s Equus Altus; and an exclusive 50cl replica of The Intrepid—officially the world’s largest bottle of whisky.  In true Scottish fashion, the evening culminated in a cèilidh, at the end of which guests joined hands to sing Robert Burns’ Auld Lang Syne.