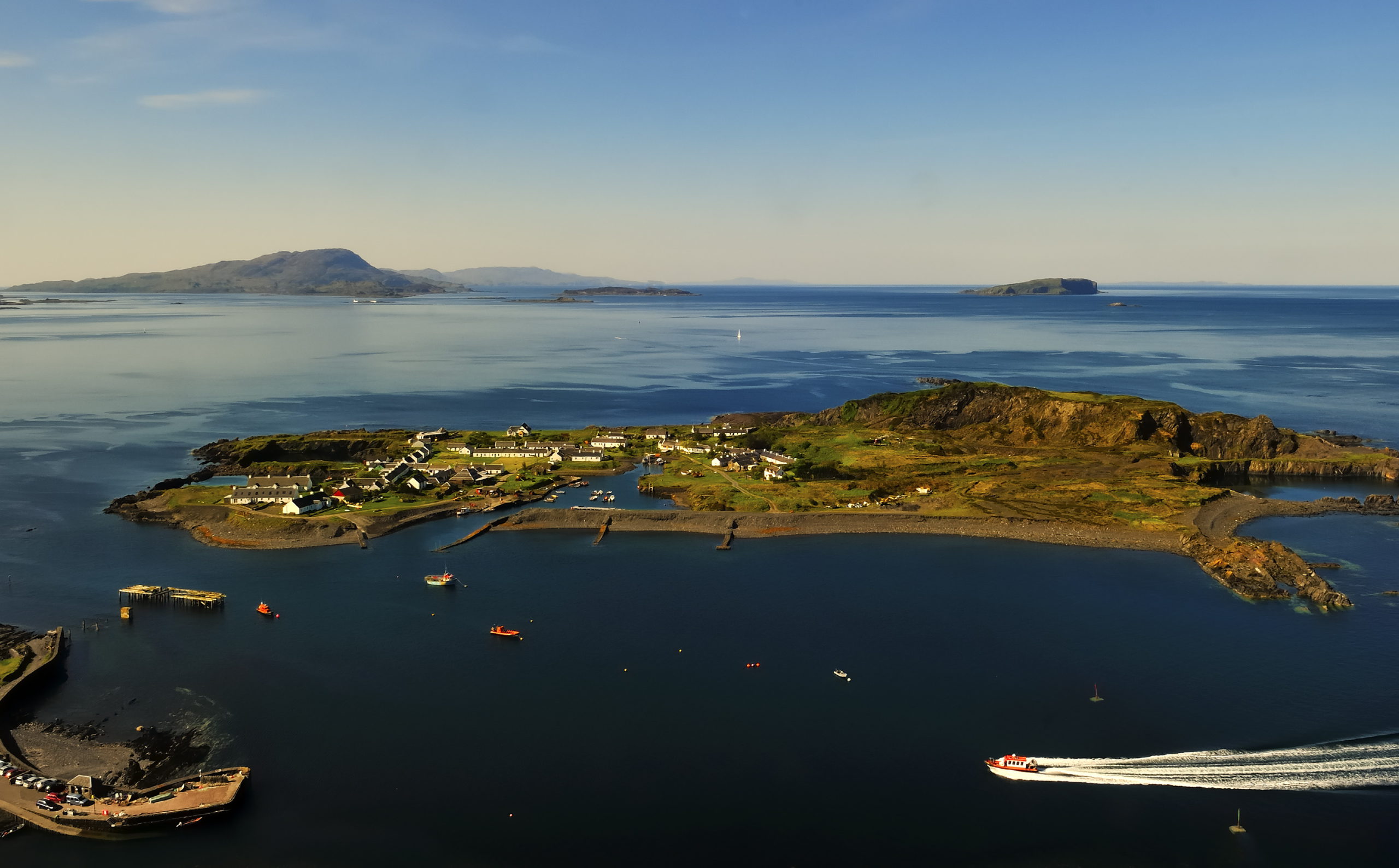 The Slate Island are a group of islands, consisting of Luing, Seil, Easdale and Balnahua, and located in the Inner Hebrides, just north of Jura. They are known as the islands that roofed the world because, as the name suggests, they were once famous for their slate quarries. Now more than half a century later the island community is looking to start slate quarrying again as there is a growing market for the product, as Judy Vickers explains.

For a couple of centuries, they were the islands which roofed the world, their rich mineral deposits which had been used since time immemorial for simple homes, suddenly in demand around the globe. Hundreds flocked to the tiny Slate Islands off the west coast of Argyll, swelling the population into thousands, to work the seams of rock which would cover mighty buildings as far afield as Canada, Calcutta and New Zealand. But two world wars and the influx of modern materials, as well as slate from the likes of Spain and China, which lacked the iron pyrite (or fool’s gold) that gave the islands’ slate a distinctive glitter but also meant it wasn’t suitable to be cut by machinery, saw the industry collapse in the 20th century.

The last quarry closed in 1961 but now, more than a half century later, there are plans to restart the slate industry, albeit on a much smaller scale. The community trust on one of the islands, Luing (pronounced Ling), has commissioned a geotechnical survey to be carried out by rock experts to see if the plan is viable. A renewed interest in historical buildings means that if there are sufficient and accessible deposits, slate quarrying will return to its ancient home. Because from the days of earliest man, the slate from these islands – Seil, Luing, Belnahua and Easdale – was used by its inhabitants to make homes, animal shelters, gravestones and anything else they needed. “Slate was used for everything,” says Mike Shaw, chairman of the Scottish Slate Islands Heritage Trust. “Back then it wasn’t just a material for putting on roofs. You name it, everything was made of slate.”

Islanders with little technology at their disposal came up with an ingenious way of splitting the rock into thinner sheets to make it more useable. Mike explains: “The slate is exposed on the beach, there are long outcrops of slate running in seams down the beach and into the sea so it’s staring you in the face. Early people drove wooden wedges into the cracks at low tide, when the tide rose and the water got into the wood, the wood swelled and cracked the slate. It was a low-tech solution.”

Until the 18th century, there was no large-scale commercial quarrying although slate from the islands – known as Easdale slate whichever of the Slate Islands it comes from – was used for many prominent buildings including nearby Castle Stalker, Cawdor Castle near Inverness and Glasgow Cathedral. People quarried in their spare time to supplement their income from farming or fishing. But in 1745, the landowner, the Earl of Breadalbane, part of the Argyll Campbell family, set up the Marble and Slate Company to make more of the islands’ natural resources. The marble side never really took off, but the slate did – within 50 years production rose fivefold to five million slates a year. With a Highland population suffering in the aftermath of the ’45 Rising and the Clearances, there was a ready labour force and the population of the islands rose from 1492 in 1755 to 2833 in 1831.

Men worked in dug-out pits lined with slate for shelter. They were paid per thousand slates sold – in arrears.  “They lived on the company shop on credit and when they did get paid most of it went back to the company shop to pay their debts,” says Mike. “It is filthy dirty work, slate creates a dust a bit like coal dust and everyone’s faces were black when they came out of the quarries.”

The sea was vital

The sea was both a help and a hindrance – quarries were placed close to where the slates could be loaded as even with skilled nappers (rock splitters) they were still a hefty two to two and a half inches thick. In the days before decent roads, the islands were surprisingly well connected – the inner channel running from Seil down Loch Linnhe out past Jura and Islay to Ireland providing a protected sea road from earliest times. Even when Seil was attached to the mainland in 1792 by the Bridge Across the Atlantic, the structure was built with a big arch. “The reason for that amazing arch was that even by then they really didn’t want to close it as a sailing route,” says Mike. “When you look around at this part of the world, these sea lochs and little islands, they are all defined by little forts and later castles from the Iron Age onwards. There was always a lot going on here. The bridge was a froth really because things continued to be moved by sea by the beginning of the 20th century. The sea was vital.”

But with the plethora of small quarries having seen the easy pickings dug out in the early days, deeper, below sea level minings struggled to keep the ocean out. “Water was always a problem,” says Mike. Nevertheless the quarries became deeper – and with an enormous proportion of waste, as much as 60 per cent, the industry changed the face of the islands. In fact, originally there was another island – Ellenabeich, or Island of the Birches – which lay between Easdale and Seil. “There was an enormous quarry there, it became like an orange, cut in half and with all the orange taken out and only the peel left, in places only a metre and a half thick, so really very thin and quarried to a depth of 300 feet,” says Mike. “The waste was enormous and the spoil was dumped in the channel between Ellenabeich and Seil to the point that the channel was completely blocked.” The island of the birches ceased to exist as an island but on that hard, packed-down spoil in the former channel, a village was built – called Ellenabeich. It’s just one of the quirks about these islands; others include the fact that the primary school on Seil is called Easdale Primary School and there are buses which run from Oban, the nearest main town, to Easdale “even though a bus can’t go to Easdale island”.

Easdale slate was exported around the world – including eastern Canada where there were Breadalbane land interests, but also to India and New Zealand, where there is an Easdale Street in Wellington. Breadalbane’s company was dissolved in 1866 and the quarries came under the control of separate commercial interests but in 1881 disaster struck. A wild storm saw a tsunami hit the islands and various quarries, including the one at Ellenabeich were flooded. There was no loss of life – the inhabitants headed for the hills in time – but even the huge suction pump that kept the daily ocean influx out couldn’t cope with this deluge and the quarry was abandoned, as were others that were close to the end of their lives anyway.

A tiny part of the islands’ rich history

The 20th century brought more challenges. ”Men here joined up in droves for the First World War and the Second World war. A lot of lives were lost but those young men who survived were exposed to the world and a lot turned around and said: ‘Do we really need to be digging slate?’” Production was also halted during the Second World War as it was not seen as necessary for the war effort. And as machinery was brought in to do skilled jobs, it was found the iron pyrite in Easdale slate – which sparkles when first exposed to the air, dulling as time goes on – made it unsuitable for the new technology. “Easdale slate had no chance,” says Mike.

The last quarry closed in 1961 by which time the population had collapsed, dwindling to just three on Easdale at one point. Model estate worker cottages, built in the 19th century to house immigrant labour at the height of the industry, were sold off to sitting tenants for a few shillings but many couldn’t find work and moved any way, leaving the houses to sit empty. “But then 25 years later, people come and said: ‘That’s my grandpa’s house, I’m going to have it as a holiday home’,” says Mike. The beauty and tranquillity of the islands means many have chosen to move here and the population has risen again – with around 150 on Seil and 200 on Luing – albeit many are retired. Belnahua, which was once home to almost 200 people, is now uninhabited. Easdale, however, which struggled to sustain a population without the slate industry as it has no natural water supply, now has a population of around 60 thanks to modern technology.

The heritage centre sees many visitors coming to find out more about their quarry worker ancestors. For Mike, though, the slate industry boom was just a tiny part of the islands’ rich history. “The slate industry lasted around 200 years – the Vikings were here for 400!  If you have any eye for history you realise you are stubbing your toe against a far older time here.”

To find out more go to: www.slateislands.org.uk