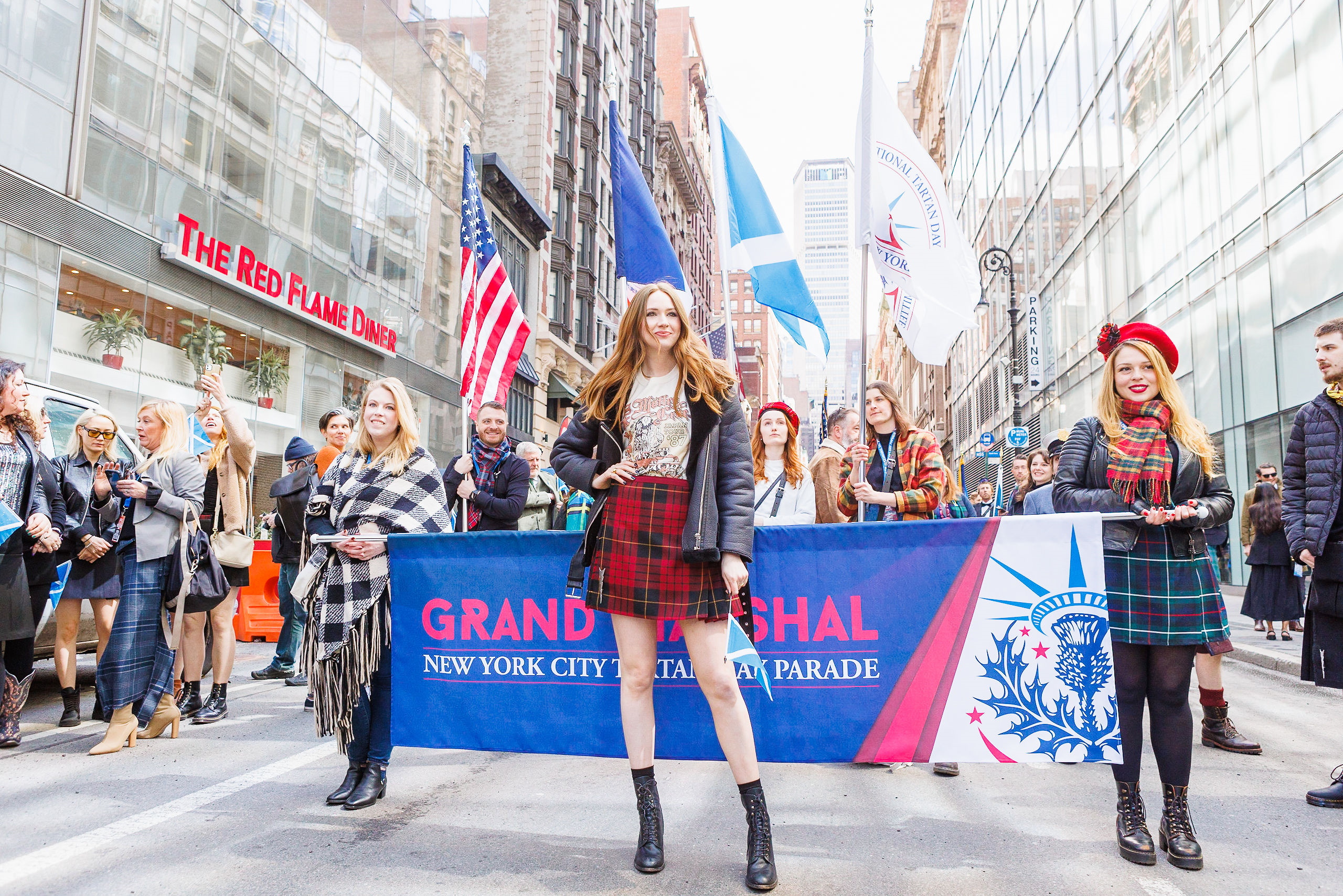 Scottish actress Karen Gillan arrived at New York’s  Algonquin Hotel carrying only a change of shoes and a small bag. With barely 24 hours leave from filming the next Guardians of the Galaxy film in Atlanta, Georgia she packed only what she could carry. Once at the hotel she slipped effortlessly into the familiar routine of hair and makeup which, for her role as Grand Marshal of the NYC Tartan Day Parade, would take considerably less time than the daily transformation into her iconic character Nebula from the Marvel Cinematic Universe.

“The fact that I get to lead the [parade] is completely insane,” Gillan said. “I’m so excited to be in one of my favorite cities in the world celebrating my country.”

Born in Inverness, Karen Gillan studied acting at the Performing Arts Studio Scotland and later at the Italia Conti Academy in London, which opened the doors for her to land some of her most recognizable roles including Amy Pond in Doctor Who (2010-13), Ruby Roundhouse in Jumanji: Welcome to the Jungle (2017), and of course the humanoid assassin Nebula in Guardians of the Galaxy (2014), Guardians of the Galaxy Vol. 2 (2017), Avengers: Infinity War (2018), and Avengers: Endgame (2019). Her most recent film, The Bubble, which was recently released on Netflix.

Guardians of the Gillan

Donning a custom Clan McQueen tartan kilt paired with a Motley Crew tee shirt, Gillan was accompanied by an entourage of seven girlfriends (each sporting their own custom kilts) as the second ever female Grand Marshal of the NYC Tartan Day Parade. Gillan said she loved the feeling of leading an “army of women in kilts,” prompting the kilt designer, Howie Nicholsby of 21st Century Kilts, to dub the companions the “Guardians of the Gillan.”

Inside the hotel Gillan paused the music on her phone – I’m Gonna Be (500 Miles) by The Proclaimers – as she joined her army of women for a dram of whisky from a specially gifted bottle courtesy of NYC Tartan Week sponsor, Braeburn Whisky. The Guardians of the Gillan rallied together for a giggling Braveheart war cry of “freedom!” as they rushed out to represent Scotland on the streets of New York City.

Shouts of “Inverness!” followed Gillan from the city spectators as she waved from atop the double-decker bus parked at the end of the parade route. Back in person for the first time since 2019 because of COVID-19, the 24th annual NYC Tartan Day Parade returned with over two thousand participants registered to march in the pinnacle event. With participants reconnecting from all across Scotland, the United States, and Canada, NYC Tartan Week President Kyle Dawson likens the event to a “family reunion,” adding that Karen Gillan was the ideal figure to represent Scotland and Scottish culture in America.

Other events celebrating Tartan Week included the American Scottish Foundation’s Tartan Day Observance held at Bryant Park to honor the day in readings of Declaration of Arbroath and Senate Resolutions. The day included music from the Highland Divas, Noisemaker, NYU Pipes and Drums, the Theatre School of Scotland and MSP Angus Robertson bringing remarks from Scotland.

Tartan Day is a celebration across both the US and Canada with events from South Carolina with Tartan Day South, to San Antonio to Los Angeles where St Andrews LA held the Tartan Film Festival. In Washington DC the National Tartan Day Award was presented by the Scottish Coalition USA to Bob Currie as part of the National Capital Tartan Day celebration.

The Scottish Banner appreciates the contribution and support with this article from Leah Rankin, Communications Director, National Tartan Day NY Committee, The Scottish Coalition USA and the American Scottish Foundation.

All images, unless otherwise noted, courtesy of Benjamin Chateauvert/GreenCastle Photography.