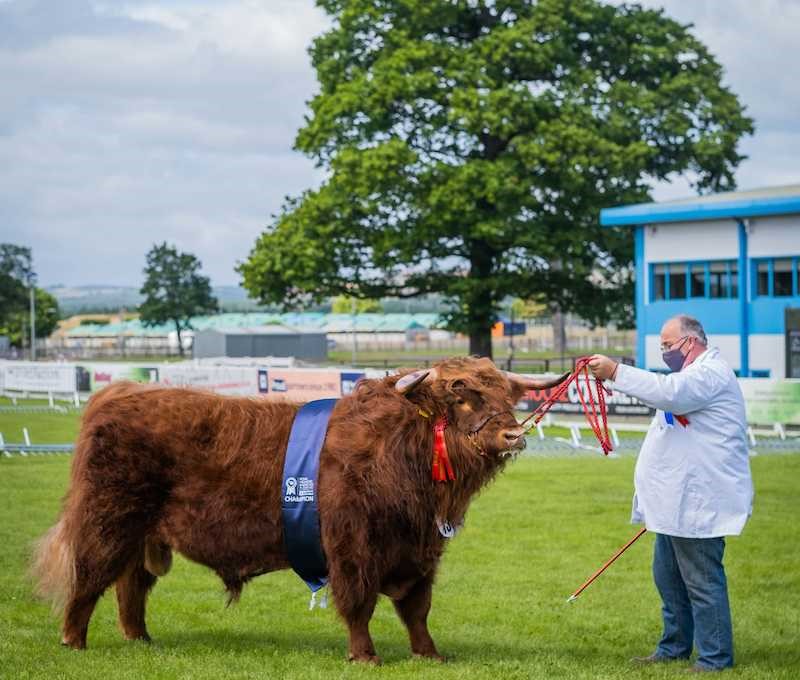 Think of an event that lasts for four days near the end of June and which attracted between 170,000 and 180,000 people pre-Covid. It sounds like I’m talking about the Glastonbury music festival but the event I have in mind is very different, has better toilets and catering and you won’t need wellies. This is the Royal Highland Show, Scotland’s largest outdoor event.

For such a major event, the show doesn’t have a massive profile for tourists. Rather, it tends to attract people from Scotland, the North of England and Northern Ireland who are interested in farming, food or rural life – or who just want a different day out. Of course, the Royal Highland Show has suffered during Covid. A curtailed event did go ahead in both 2020 and 2021, but with only online spectators. The 2022 version will admit visitors, though in reduced numbers. But, in some form, it will go ahead; because this is its 200th anniversary.

The show is run by the Royal Highland and Agricultural Society of Scotland (RHASS) which works to improve Scottish agriculture, rural life and industry. It was formed in 1784 and held its first show in 1822. The first show was held in the grounds of Queensberry House in Edinburgh’s Canongate. Queensberry House survives today, incorporated into the Scottish Parliament complex. MSPs now congregate where livestock once paraded. Make of that what you will.

The show has always had strong royal links. In 1859, the Prince of Wales, the future Edward VII, visited the show. In 1872 his mother, Queen Victoria, asked to be enrolled as an ordinary member of the society. The society and show both acquired ‘Royal’ status in 1948, granted by George VI. His daughter, the present Queen, became patron of the show in 1984 and visited as recently as 2009. The show tends to clash with Royal Ascot.

Each year the show used to be held in a different venue; for example, it travelled to Alloa in 1929, Dundee in 1933 and Inverness in 1948. The last host location of the itinerant years was Aberdeen in 1959. Since 1960, the Royal Highland Centre at Ingliston has been the show’s established home. The site is squeezed between Edinburgh Airport and the busy A8 road. The heart of the site is a large grandstand by the main showing rings where equine showing classes, showjumping and agricultural champions’ parades are held. A highlight is the parade of brewers’ drays from across the UK, the vehicles exquisitely decorated and hauled by magnificent Clydesdales and Shires that smell faintly of shampoo. Scott Brash from Peebles has often competed in the showjumping events; he has been top-rated showjumper in the world and is an Olympic gold medallist. His every clear round brings the house down.

Not far away from the main arena are the sheep and cattle showing rings, and there are other, more distant showjumping and showing arenas. Much of the vast site is given over to shopping villages and showrooms where you can buy a pair of stirrups or a tractor or a sack of horse feed or a punnet of strawberries or a sturdy tweed jacket. The food exhibition features demonstrations by celebrity chefs and stalls where you can sample the produce of quality food companies from throughout Scotland and beyond. The RHASS have, in recent years, tied to promote quality among the dozens of on-site catering outlets – local sourcing, sustainability and so on. The Royal Highland Show is all about Scottish food and farming; do your duty and eat as much as possible.

At the show, city folk (like me) get to see prize bulls and cows and goats, watch sheep being sheared, experience the sounds and smells of farriery, and visit food stands that explain how goodies get from farm to shop to kitchen. The Royal Highland Educational Trust (RHET) arranges visits for young people to farms and provides educational resources on food and farming. At the show, the RHET runs a special facility where young children can learn about farming and farm animals. The RHET, and the show itself, do their bit to ensure people know where their food comes from.

But there’s more for visitors than an insight into farming and rural life.  The Countryside Arena hosts falconry demonstrations, gundog displays, terrier racing and duck-herding. One year there was an exhibition of ferret-racing which was my highlight of the show. The Forestry Arena offers even more dramatic entertainment, with pole climbers spidering up 100ft tree trunks, axes being hurled at archery targets and mountain bikers performing jaw-dropping leaps and bounds.

A surprising feature of the show is its eclectic selection of musical entertainment, from traditional pipe bands to buskers. I once saw the legendary Alexander Brothers belying their years to wow the crowds. A different take on Scottish traditional music was provided by Clanedonia, an alarming-looking bunch with straggly hair and beards, like battle extras in Braveheart. They perform high-octane music with six drummers, a piper and the energy of a fight outside a pub. One year a schools’ pipe band from West Lothian bravely toured the site playing stirring stuff, defying the miserable conditions of a soggy summer. In another, drier, year the musical headliners were the Red Hot Chili Pipers. The confused announcer introduced them as The Red Hot Chili Peppers. The American rockers would have been a real coup for the show.

The site is served by vast car parks and during the four show days special double-decker buses roll in regularly from Edinburgh. In 2012, the attendance over the four days dropped to 161,000 owing to unremitting rain. Yet the Royal Highland Show can cope with wet, thanks to its permanent buildings and network of tarmac roads and paths. This year will be quieter than usual, but visitors will return. After 200 years, the show must go on.

1 thought on “The Show Must Go On”