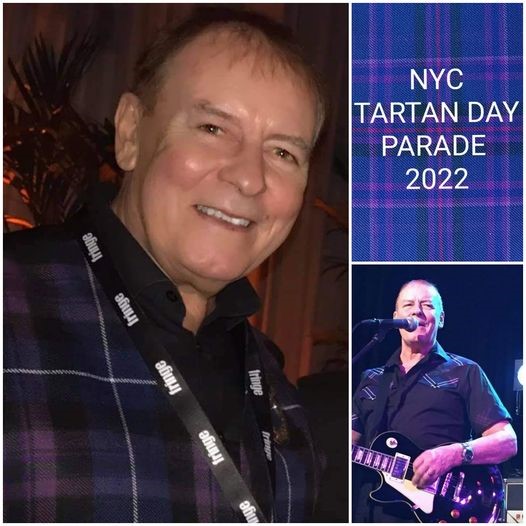 In the 1970’s the Bay City Rollers were one of Scotland’s hottest exports. Fans the world over were obsessed with Les, Alan, Derek, Eric and Woody and Rollermania was born. The founder members, Alan and Derek Longmuir created the band in the front room of 5 Caledonian Road,  Edinburgh, after which their lives were never the same again. With their half-mast trousers and scarves tied to wrists,  they made tartan trendy and for the next forty odd years the Rollers were synonymous with tartan.

When Alan passed away 2nd July 2018 there was huge outpouring of grief from fans the world over, a true legend had gone. Lesley Stirrat, a lifelong fan and traditional kiltmaker, had the idea of honouring Alan with his own tartan. The idea was run past friend and fellow fan Gillian Watkins and Alan’s wife Eileen, who both loved the idea and so the seed was sown. Working with Marton Mills, designs and colours were discussed and chosen. The colours chosen were purple for the heather, green for the Ochil Hills, blue for the Bannock Burn and pink a favourite of Eileen and Lesley. Next was the name, although Alan lived for many years in Bannockburn near Stirling, he was always first and foremost a proud son of Edinburgh and so this beautiful tartan, the Official Alan Longmuir Proud Son of Edinburgh tartan was born.

Team Tartan in the Big Apple

On 9th April 2022 Bay City Roller fans from all around the world will be taking part in the world-famous New York City Tartan Week grand finale, the Tartan Day Parade.  Eileen was touched and honoured beyond words when she was told that the march, down iconic 6th Avenue into Central Park, was to be in honour and memory of Alan. Eileen, Lesley and Gillian were so thrilled that Alan’s Proud Son of Edinburgh tartan was to be the featured and showcased tartan on the day. Lesley and Gillian are beyond excited to now be able to complete the “Team Tartan” attendance Stateside and join with Eileen and 100 other fans from across the UK and around the world, at this unique and exciting fan event.

For Eileen it will be especially poignant as only a few years ago Alan was asked to be the honoured Grand Marshall of the Tartan Day parade that year, but alas was unable to do so. Perhaps with his own beautiful tartan being waved and displayed, it will almost be like him being there after all. If folks at home the world over, who cannot attend, display their tartan at home in Alan’s honour on the day, we can show the world that though he is no longer with us, Alan Longmuir, Proud Son of Edinburgh, the original Bay City Roller can still turn the world tartan.

You can follow the story, and journey to New York this month, of the Official Alan Longmuir Proud Son of Edinburgh tartan at: www.facebook.com/Alan-Longmuir-tartan-Proud-Son-of-Edinburgh-102578251193391