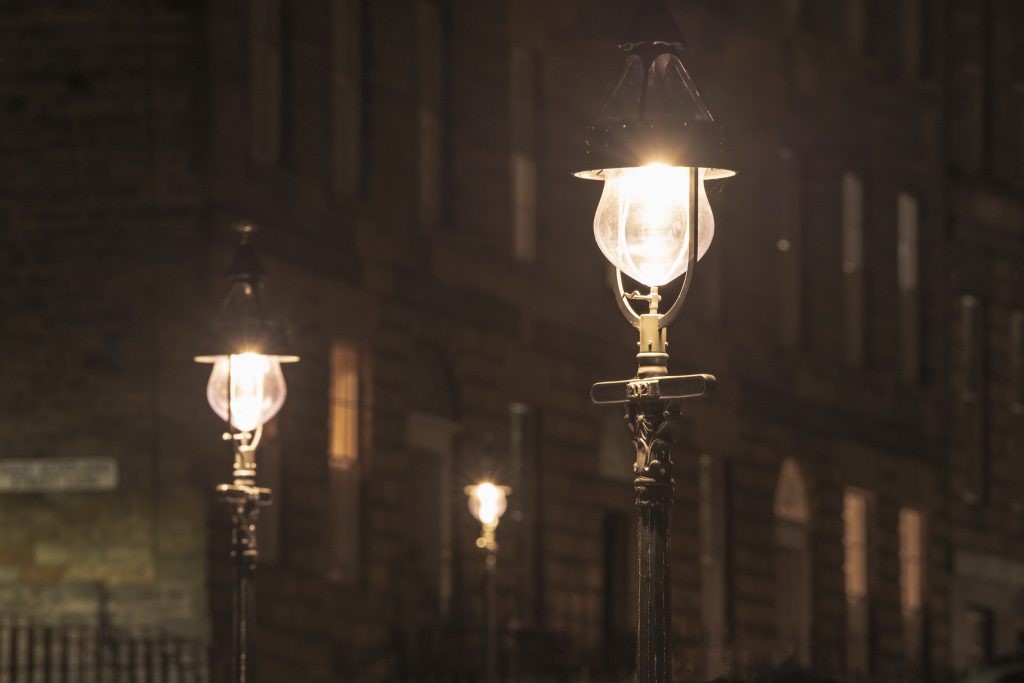 Newly installed Georgian replica streetlights were switched on in Edinburgh’s Scotland Street, made famous by the Sandy McCall Smith 44 Scotland Street series of episodic novels. The project, which was completed through a partnership between Edinburgh World Heritage and the City of Edinburgh Council, is part of a wider scheme to restore historic street lighting at sites across the city.

The first of this wave of streetlight restoration took place in Circus Lane in 2001, and since then Lynedoch Place, Belford Road, Clarendon Crescent, and Alva Street have all benefitted from the addition of historically appropriate lighting. The design for the Scotland Street lamps was based on one that stood next to the Heart of Midlothian on the High Street, as seen in a photograph from 1883. This style of lamp was used widely in Edinburgh in the 19th century, and features a conical glass cap and a large glass globe light, designed to protect the original lamps from the fierce heat of their “fishtail” burners. The present design also incorporates a rounded glass finial, which the 19th century Holyrood Glassworks Catalogue described as a “crystal knob”. Much of the original research and planning for the project was provided by Andrew Kerr, a long-term resident of the New Town and former trustee of Edinburgh World Heritage.

The design process for the Scotland Street lamps began in 2011, but was held back due to the lack of original globe lamps in the city. However, one was found in a Dublin Street cellar, which was used as a model. By studying old photographs, Jonathan Knox, of the University of Edinburgh, was able to create a 3D computer rendering of how the lamps would have looked.

The streetlights were manufactured by Manchester-based Metcraft Lighting, a company that specialises in high-quality heritage and decorative lighting, and are fitted with LED lights to conform with the City of Edinburgh Council’s plans to convert the city’s streetlights to energy-saving LED.

Christina Sinclair, Director of Edinburgh World Heritage commented: “The new lighting’s authentic design has improved the architectural landscape of the street and enhanced, in a modest way, the Outstanding Universal Value of the World Heritage Site. Additionally, there is the practical benefit of improving night-time visibility for residents and road users alike. This project perfectly demonstrates how heritage and city improvement can go hand in hand, creating a more beautiful but also more liveable city for Edinburgh’s residents.”