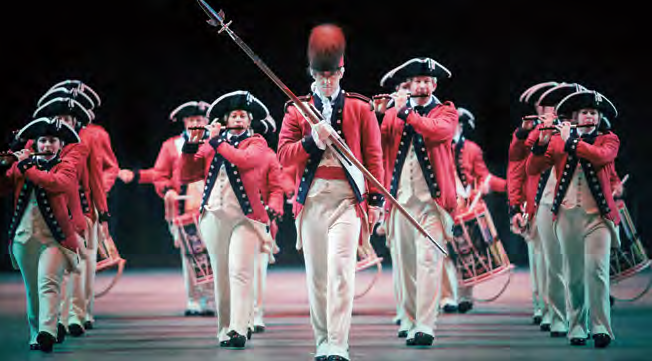 The largest spectacle of music and might in the United States, The Virginia International Tattoo will MARCH ON April 28 – May 1 with a triumphant return to Scope Arena in Norfolk, Virginia. Celebrating its 25th anniversary season, the 2022 Tattoo features an all-new international cast, a musical tribute to “March King” John Philip Sousa, and an emotional celebration of the resilience of the human spirit.

Bringing together hundreds of performers from not only across the USA, but internationally, must be quite a challenge, can you tell us more this year’s cast and participating countries?

VIT: Highlights of this year’s Virginia International Tattoo (VIT) include:  Band of the Netherlands Mounted Arms Regiment – “The Bicycle Band” – in their 4th appearance at Virginia International Tattoo, WWI Era uniforms and history of Dutch bicycle cavalry and modern brass band excellence. Pipes and Drums of the Highlanders, 4th Battalion, Royal Regiment of Scotland will make their second trip to the Tattoo. One of the most historic Pipe Bands in the world. Pipe Major CSgt Peter Grant served as the lone piper at the funeral of Prince Philip, Duke of Edinburgh. Pipe Major CSgt Grant serves alongside his brother Drum Major Sgt Ruaridh Grant, the first siblings to hold the appointments of Pipe Major and Drum Major at the same time in the history of The Royal Regiment of Scotland.

Jordanian Armed Forces Band and Jordanian Armed Forces Pipes and Drums return to the Tattoo as they Celebrate the 100th Anniversary of the Kingdom of Jordan. A strong British influence remains strong from the Transjordan Mandate of the early 1920s when the British helped set up and train the protectorate’s army following WWII.

The U.S. Army Old Guard Fife and Drum Corps is the only unit of its kind in the U.S. Armed Forces. The musicians of this unit recall the days of the American Revolution as they perform in uniforms patterned after those worn by the musicians of General George Washington’s Continental Army. Musicians of the highest calibre, the Corps uses 10-hole fifes, handmade rope-tensioned drums and single-valve bugles, which bring to life the exciting sounds of the Continental Army.

U.S. Marine Forces Reserve Band will return with pulse pounding music and their signature re-enactment of the Raising the Flag on Iwo Jima is an iconic photo of U.S. Marines raising the U.S. flag atop Mount Suribachi during the Battle of Iwo Jima in the final stages of the Pacific War. All members of the band are trained riflemen and fulfill Corps-wide physical fitness and combat training requirements, just like any other active-duty Marine. The band is prepared to “Fight Tonight” and can be called upon to provide security, both domestically and overseas, by order of the Commander, Marine Forces Reserve.

Andy Carlisle’s Tartan Army is a gathering of many of top solo pipers and drummers in the United States, many who have won national championships, as well as awards at international competitions. The majority are students and contemporaries of Highland Bagpipe Soloist Andrew Carlisle, who has been with the Virginia International Tattoo for over ten years. Recruiting pipe bands during a pandemic proved challenging so Carlisle invited some of his students and former students to come and form a “pick-up” band to enhance the Tattoo Massed Pipes and Drums. All embraced the opportunity and are sure to be a very strong musical ensemble.

U.S National Scottish Fiddle Champion Seán Heely is one of the most creatively versatile and captivating young artists of his generation. He is a as well as an award-winning Irish Fiddler and singer in the folk and Gaelic traditions of Scotland and Ireland. Seán holds a degree from University of South Carolina in Classical Violin Performance and has performed in Scotland, Ireland, and at across the United States.

The Tattoo also has its very own tartan, can you tell us more?

Tartan is a pattern consisting of crisscrossed horizontal & vertical bands in multiple colors.  The tartan is particularly associated with Scotland.  The colors of the Virginia International Tattoo Hixon Tartan, steeped in tradition and bound to its roots, perfectly demonstrate the rich heritage the Tattoo celebrates and the great state in which it resides.  The dominate blue, “Festival Blue”, embodies the Virginia Arts Festival and pays tribute to those who bring the arts to life.  The red, white and blue threads intricately woven throughout the tartan symbolize the patriotic themes and the heart-stirring performances synonymous with the Tattoo.  The Virginia Flag and the Norfolk Seal are illustrated by the blue hues interlacing the tartan.  And the grey stripes proudly guarding the red, white and blue remind of us the massive grey hulls that guard our harbor and the mighty jets whose presence overhead keep us ever mindful of the men and women who sacrifice for our freedom.

The Tattoo is really an all-ages event, with a great school outreach program, and offers something for the whole family. How rewarding is it to host an event that crosses generations and brings in people to Virginia from across the country and the world?

VIT: The Tattoo has the ability to connect across generations. One of our guests wrote about the Tattoo, “This was the first time in our family’s history that we were able to sit through an ENTIRE performance with ALL eyes watching, ALL mouths smiling, ALL minds engaged, ALL fingers and feet at peace, ALL hearts happy. Thank you for this special night. It is now our family’s annual favorite event!”

Can you tell us about the Tattoo rehearsal process? Is it very difficult because of the large amount of participants?

VIT: There are some unique rehearsal challenges for the Tattoo. Musical rehearsals are relatively straight forward. All of the performers receive music well in advance and we can usually get the music polished up in one rehearsal. The overall choreography is what is most difficult. Getting every person, musical instrument, microphone, lighting instrument, video camera, and Flag in the right place at the right time is a very involved process. I rely on a production team of more than 100 to help make it happen.

How do you prepare yourself for each performance?

VIT: We do a production meeting following each rehearsal and student matinee to review any and all production challenges that need to be addresses. It is important to address any changes with the entire team because one person deciding on their own to “improve” something seemingly innocent can affect a lot of other people in ways that they can’t imagine. From the moment that meeting ends until the next performance begins the team is trusted to implement the changes as discussed.

Is there anything else you want to share about the 2022 Virginia International Tattoo?

VIT: The 2022 Virginia International Tattoo – our Silver (25th anniversary edition)– will be an extraordinary homecoming for all involved. The Tattoo will return to its long-time home at Scope arena in Downtown Norfolk, Virginia; our international performers will be back with a renewed desire to share their music, culture and traditions; and the free preshow Tattoo Hullabaloo will once again wow crowds for hours every day.

The Virginia International Tattoo will take place April 28-May 1st at Scope Arena in Norfolk, Virginia. Tickets and Information: www.vafest.org, by phone at 757-282-2822.