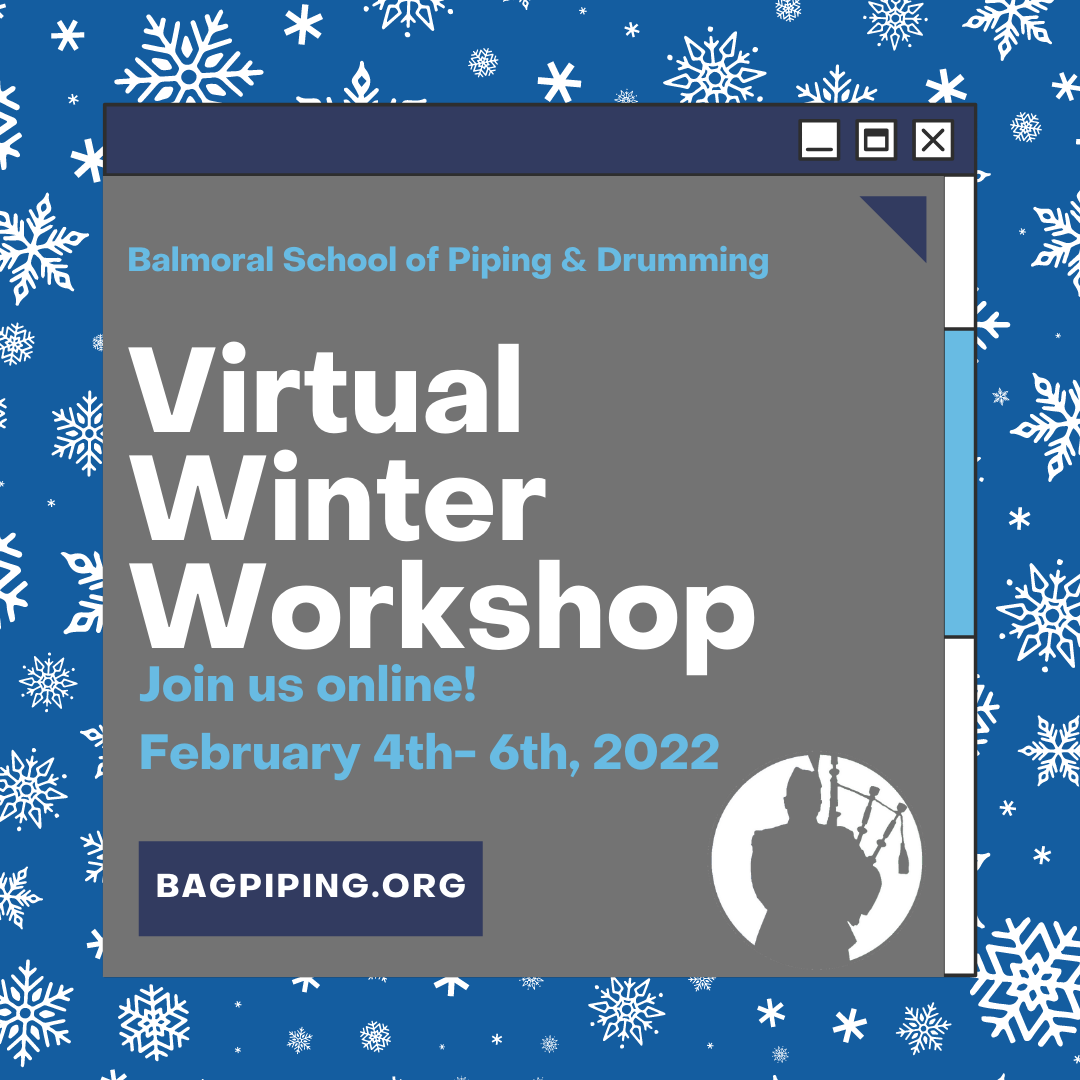 The Balmoral School of Piping & Drumming is offering a weekend-long Winter Workshop for Pipers, February 4-6, 2022, for a fee of $275 USD. Students who refer new students will receive $50 off the price of the Workshop for each new student referred.

Attendees will receive online instruction via Zoom, with tech help available for those who need it. Our guest piping instructors—Roddy McLeod, Andrew Carlisle, Bruce Gandy, Robert Mathieson— have all won major awards and have incomparable records of teaching and promoting pipe music around the world.

Roddy MacLeod, MBE, of Glasgow, Scotland, won his first Gold Medal at the Northern Meeting in 1986, Argyllshire Gathering Gold Medal in 1988. He is a 10-time winner of the Piobaireachd at the Glenfiddich Solo Piping Championship and has won the overall title five times. While Pipe Major of the Scottish Power Pipe Band, he led it to over 45 Grade 1 Championship prizes including the Cowal Championships and All Ireland Championships. He was Principal of The National Piping Centre from 1996 -2020.

Originally from Northern Ireland, now a resident of Pittsburgh, Andrew Carlisle has won numerous top awards: A Grade Strathspey and Reel at Oban, the A Grade Piobaireachd & Overall at The Cowal Highland Gathering, US Gold Medals for both Light Music & Piobaireachd, and three All-Ireland titles at Senior level. He’s 3-time winner of the Macallan Trophy at Lorient, Brittany, France. Andrew holds the prestigious positions of Professor of Music and Director of Piping at Carnegie Mellon University.

A resident of Halifax, Nova Scotia, Bruce Gandy was a member of the 78th Fraser Highlanders Pipe Band when they were the first non-Scottish pipe band to win the World Pipe Band Championships in 1987. His solo awards include the Canadian Gold Medal, Gold Medal at the Northern Meeting, Gold Medal at Oban, and Bratach Gorm. He is a 3-time winner of the MacCrimmon Memorial Cairn for Piobaireachd and is a Vancouver Indoor 6-Time Metro Cup Winner.

From Hamilton Scotland, Robert Mathieson is a composer of pipe music, as well as an award-winning Pipe Major. He served as pipe major of the Shotts and Dykehead Caledonia Pipe Band of North Lanarkshire, Scotland, from 1986 to 2010. The band won 30 major championships under Mathieson’s leadership and was a 5-time winner of the World Pipe Band Championships.

Special deal for band members! Bring at least a few members of your pipe band to Balmoral and you’ll receive a highly customizable band clinic, tailored to your band’s needs, as part of your Winter Workshop.