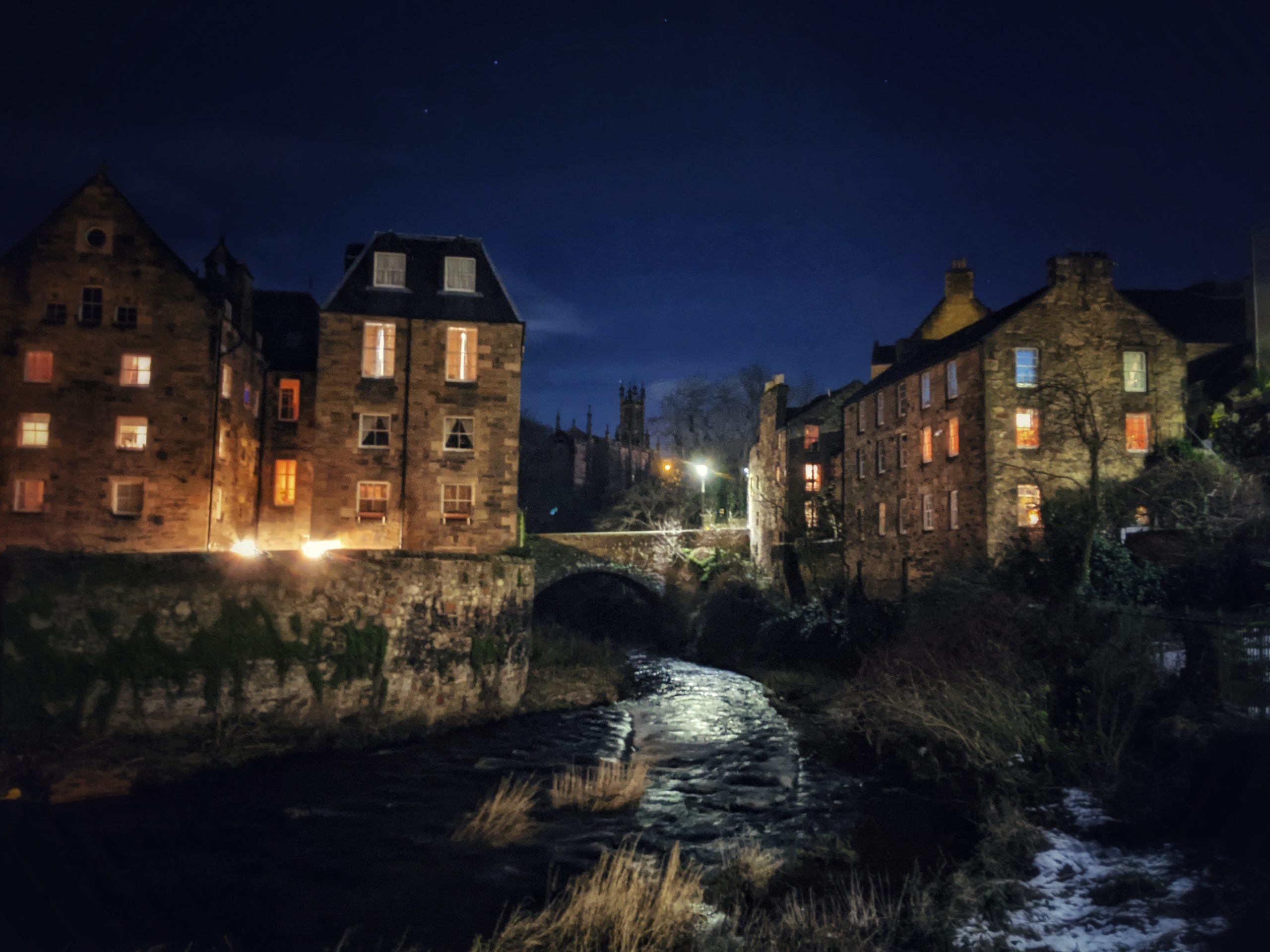 As I write this in Edinburgh on the 4th of December, it is fully dark outside by 15:45. Elsewhere in Scotland, night comes much sooner. Two days ago, a friend who recently moved back to Orkney after several years living in the Central Belt lamented the loss of all-natural light there by 14:30. Tellingly, the Scottish Gaelic term for the month of December is An Dùbhlachd, ‘the darkness’. Confronted with the diminishing daylight, there are two responses: to hibernate, which is wholly sensible; or to embrace the novelty of seeing your world in a whole new (lack of) light, which is arguably less so. More and more, I find myself doing the latter.

Evidenced by the above, at this time of year, ‘dark’ does not necessarily equate to ‘night’ so many of the following wanderings were done in the early evening rather than in the wee hours of mid-night. It always felt safe, although I acknowledge that as a man often accompanied by a dog, that safety comes in no small part from a place of privilege. Before you take inspiration from this, bear that in mind and take whatever steps you need to, perhaps by bringing a companion along, to stay as safe as can be. I can vividly recall the moment when I became enamoured with exploring after dark.

One November evening I was standing on a narrow wooden walkway, unable to see either its beginning or end, surrounded by bog and the ambient silence of night. I was visiting Finlaggan, once the capital of the medieval Lordship of the Isles, in Islay. Finlaggan is a sort of geographic fractal – two islands in a loch on an island in a sea. Earlier that day I visited by daylight, and was curious to see how the cover or darkness transformed the place.  By necessity, each step on this return journey was more deliberate. The ability of my senses to orient myself was considerably dulled, yet rather than blunting the experience I found that it heightened it. By day, the wooden walkway was just a practical, if novel, way of staying dry; by night it felt like a tunnel or portal, inexorably drawing me closer to its invisible yet inevitable destination. Standing halfway along it, for all I knew the world at either end had ceased to exist. It was a little bit terrifying, but utterly thrilling. Arriving flashlight in hand on Eilean Mòr, Finlaggan’s ‘big island’, each step forward exposed a tiny new sliver of the unknown. Casting the light over the fragmentary ruins of a stone chapel, which in daylight seemed entirely innocent, made it appear like a giant’s grasping hand rising up from the dark, waterlogged earth. Everything was familiar, yet otherworldly and slightly hair-raising. I’ll never forget it.

Another experience, also in Argyll, cemented this newfound thrill. Kilmartin Glen is one of Scotland’s most extraordinary historic landscapes. It contains castles, cairns, rock art, standing stones, crofts, medieval settlements, hillforts, harbours, and so much more. I arrived there one April evening as the sun had mostly set, under a soft blue and purple gloaming. After dinner and in full darkness I went to Kilmartin Church to visit one of my favourite collections of medieval and Early Modern artefacts. Within a former mausoleum turned lapidarium are 23 grave slabs, carved between the early 13th century and 1712. They are carved with images of swords, warriors and knights, standing side by side in an unbroken line along the walls from left to right, surrounding you as you enter. I turned on the flashlight and moved it over each one in turn, casting them into sharp, shadowy relief. The spotlight made them appear like statues in the niches of a church, which I’m sure they would be happy to hear. I had seen them several times before, but always in daylight. For reasons I can’t quite explain, this time it felt as though I got to know them better than in all of the previous times combined.

During the past two years when the world sometimes shrank to what’s within walking distance of my front door, I sought out the nocturnal sights of my Edinburgh neighbourhood, Stockbridge. I noticed that how I thought about places that had become mundane through daily repetition took on new, interesting characteristics. There is a set of stairs next to the local pharmacy that I always found intriguing – a zigzag of arched steps that appear almost to float, especially in the dark, wedged into a narrow multi-level close (the Scots term for an alley used as a thoroughfare). I had been up and down them several hundred times before, but as my curiosity piqued due to the lack of anything ‘new’ to see, they became not just any steps, but my favourite steps. Passing by them now I always take a look, as if checking in on an old friend.

Embracing the dark side

Light takes on a whole new life in the dark. My phone is equipped with a function called ‘Night Sight’, which artificially enhances the visibility of features in the dark. It is not quite an honest representation of what the eye sees, but it captures the spirit of it. Blues contrast with oranges, the sky appears ever so slightly illuminated, and the glare from street lamps sends little sparks across the image. With this new way of seeing, I took hundreds of pictures of places I had long ago stopped bothering to photograph. A local twisting path affectionately called ‘the Snakey’ was transformed into trees that seemed almost ablaze against the coldness of the sky. The lights of Dean Village became a scene emanating storybook cosiness. A tiny patch of garden along the Water of Leith containing similar tree specimens to those in the nearby Royal Botanic Garden looked as though it might play host to the next revelry of the faerie folk. St Bernard’s Well, a place known for its healing waters and statue of Hygieia, Greco-Roman goddess of hygiene and health, became a monument of shadows that you might expect Mr Hyde to pounce out from. Other, grander monuments in Edinburgh’s city centre, like the Scott Monument and Edinburgh Castle itself, were no less subject to this transformation.

Maybe this all sounds daft to you and you’d rather stay curled up under a blanket with a hot drink in hand throughout winter, and that’s perfectly reasonable. Normally I would do the same. The circumstances thrust on us since March 2020, however, have necessitated new ways of engaging with our local communities and own our sense of curiosity. Exploring Edinburgh and other Scottish historic sites after hours has been my way of keeping that curiosity alive. Plus, there’s no rule saying you can’t tuck in with a hot toddy afterwards as a reward for embracing the dark side.