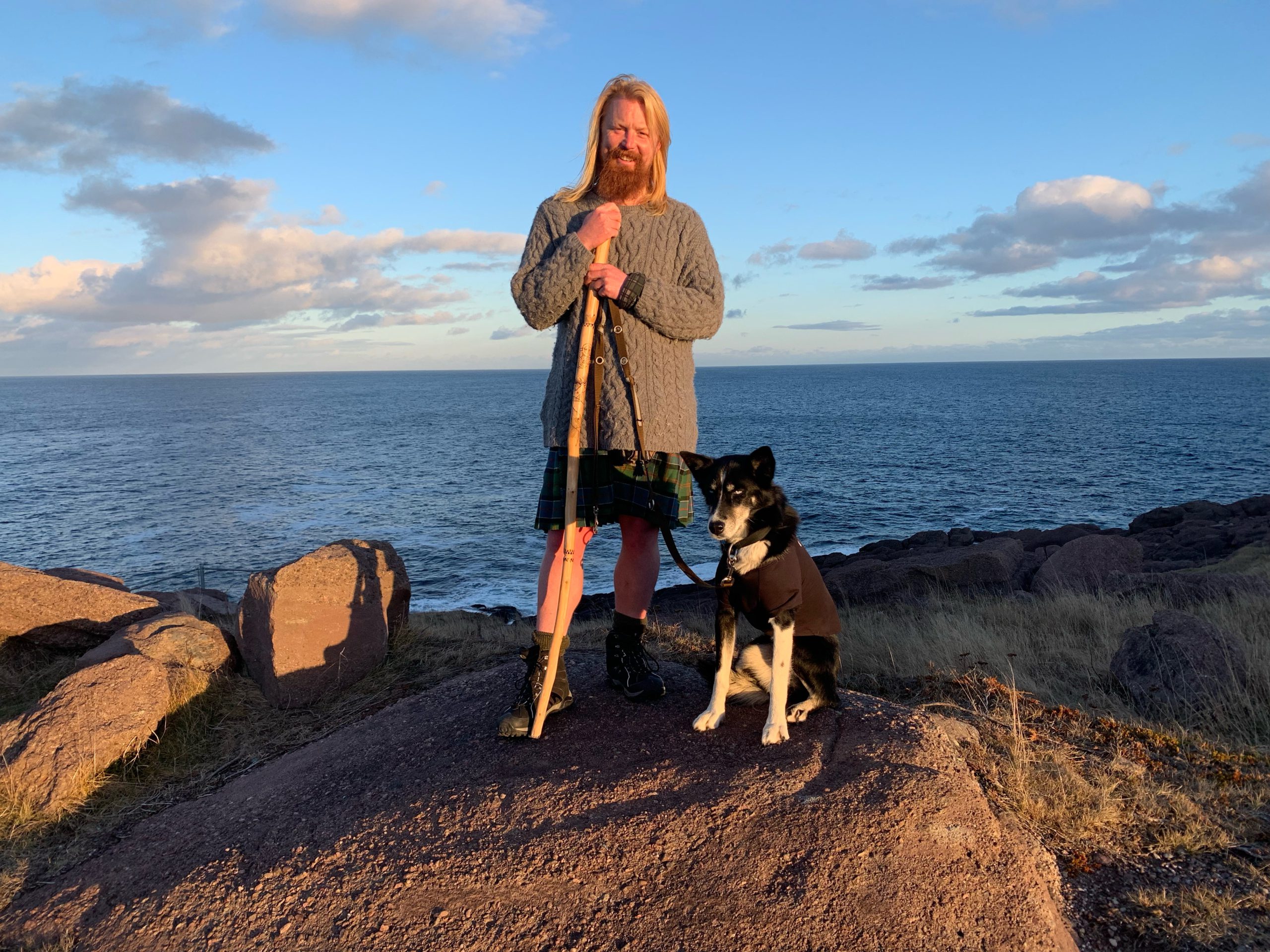 After a gruelling nine months on the road which began on the shores of the Pacific Ocean, 32-year Michael Yellowlees from Perthshire and his faithful Alaskan husky dog Luna have finally reached Canada’s Atlantic coast, having trekked right across the vast country for Highlands-based rewilding charity Trees for Life.  On Sunday 5 December, throngs of well-wishers gathered at the remote Cape Spear Lighthouse in Newfoundland, while political leaders in Canada and Scotland expressed their admiration for Michael’s heroic venture.

“My best wishes on the successful completion of your incredible walk across Canada, Michael!” declared Prime Minster Justin Trudeau. Noting that Michael has raised $50,000 for the Scottish rewilding charity Trees for Life, Prime Minister Trudeau added: “Michael chose Canada for this mission due to the many Scots who left their homeland generations ago, settled here, and contributed significantly to the fabric of our country.  He was also inspired by the many and vast beautiful natural environments Canada continues to enjoy and protect. Despite the challenges faced by the pandemic, I would like to take this opportunity to thank Michael for his inspirational adventure.”

Scotland’s Deputy First Minister John Swinney – who is Michael’s local MSP – said: “I warmly congratulate Michael on the astonishing feat of endurance he has accomplished in support of a cause to which he is devoted. Michael has demonstrated the power of individual action to raise awareness of this vital issue of our day. His commitment to restoring our natural environment is an inspiration to us all. I have had the privilege of knowing Michael and his family for many, many years. He is a shining example of the tenacity and inspiration that his family have brought to all they have done”.

Michael, a native of Birnam and a former pupil of Breadalbane Academy, has Canadian roots and travelled to the country in 2020. While working with sled dogs before he set off on his journey, he befriended Luna, who would become his constant companion every step of the way. Midway through the journey, Michael was distraught when Luna vanished into the Canadian wilderness. After a week searching high and low, aided by local volunteers, the two were joyfully reunited when Luna suddenly reappeared at his side – having chewed away her lead, which appeared to have become entangled in forest vegetation.

“Apart from that horrible scare, the journey through Canada has been amazing,” says Michael. “And so too have the people. I’ve been marched into towns by pipe bands, applauded by crowds lining the streets, and inundated with offers of food, clothing and shelter. It has also been emotional. The huge population of people of Scottish descent in Canada is partly a consequence of the Highland Clearances, which were accompanied by ecological destruction. Canada is a beautiful land with an abundance of woodland and wildlife. This journey has been about raising awareness and funds to help restore the Scottish Highlands to a flourishing ecosystem as part of our contribution to tackling the twin global emergencies of climate change and biodiversity loss.”

Steve Micklewright, Chief Executive of Trees for Life, expressed the gratitude of the whole charity: “We want to say a huge thank you to Michael for walking across Canada for the last nine months and raising so much money for our work rewilding the Highlands. His achievement has been amazing. His journey is a powerful reminder that rewilding offers hope for tackling the nature and climate emergencies, while benefitting people and local communities.”

Michael was especially pleased to receive a video message from Scottish entertainment legend Elaine C Smith, who took time out from her hectic schedule as a pantomime dame in Cinderella at Glasgow’s Kings Theatre to tell Michael: “You’ve done a wonderful, wonderful, thing. It’s just brilliant.”  Michael, naturally, is feeling pretty exhausted and said: “So now I’m looking forward to taking a couple of weeks of rest, decompress, then try and process everything that’s happened because it really has been a magical year and experience.”

Trees for Life is dedicated to rewilding the Scottish Highlands. Its volunteers have established nearly two million native trees at dozens of sites, encouraging wildlife to flourish and helping communities to thrive.

A full interview with Michael can be found either in the November edition of the Scottish Banner or at www.scottishbanner.com. To support Michael and Luna’s epic fundraising drive for Trees for Life, please visit: www.justgiving.com/fundraising/michaelandlunarewild