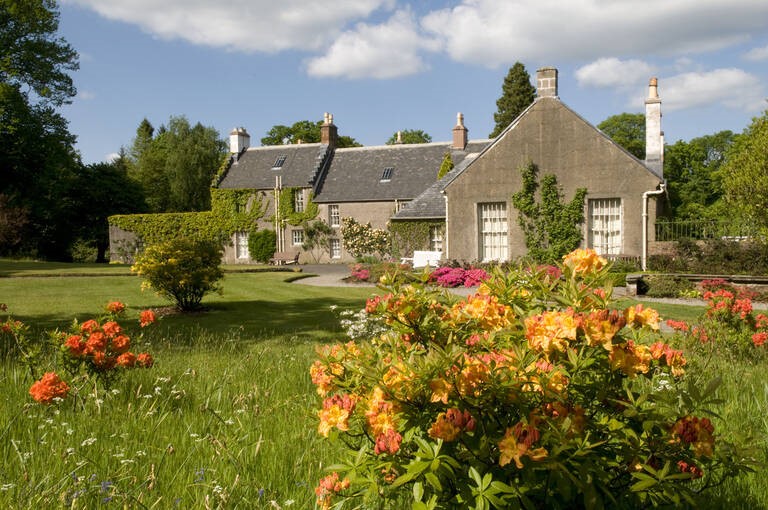 Cardross is a quiet commuter village with a spectacular location on the north bank of the Firth of Clyde, midway between Helensburgh and Dumbarton. It’s a small village yet its railway station has direct services to both Glasgow and Edinburgh. A nearby estate has fascinating links to the history of conflict and colonialism; perhaps there are lessons we can learn at Geilston House. The Geilston Estate lies just to the north-west of Cardross, on the Helensburgh side. The name comes from ‘Gilliestoun’ which means ‘Servants’ Farm’.

It dates back to the 1500s, but the oldest parts of the current Geilston House were built around 1660; it’s believed to have had a thatched roof until the early 1800s. As we’ll see, the house has passed through various ownerships.

It was a Thomas Donald who purchased the estate in 1757. He was one of Glasgow’s ‘tobacco lords’ who made their fortunes from the plantations and whose economic and cultural legacy is troublesome given the role of slavery in the industry (not to mention the health effects of tobacco). From 1769 to 1787 the Moore family rented Geilston from Donald. Dr John Moore had been a military medic during the Seven Years War of 1756-1763. His two sons, Graham and John, would also join the army. John the younger became a major celebrity, serving in America, France, Egypt and Holland, acquiring a knighthood and reaching the rank of Colonel. He was killed in 1809 during the Peninsular Campaign but by then was so revered that Charles Wolfe composed a poem, The Burial of Sir Charles Moore. Graham joined the Royal Navy, was also knighted and reached the rank of Admiral. He lived until 1843, died peacefully, and is buried in the churchyard of Cobham in Surrey, England.