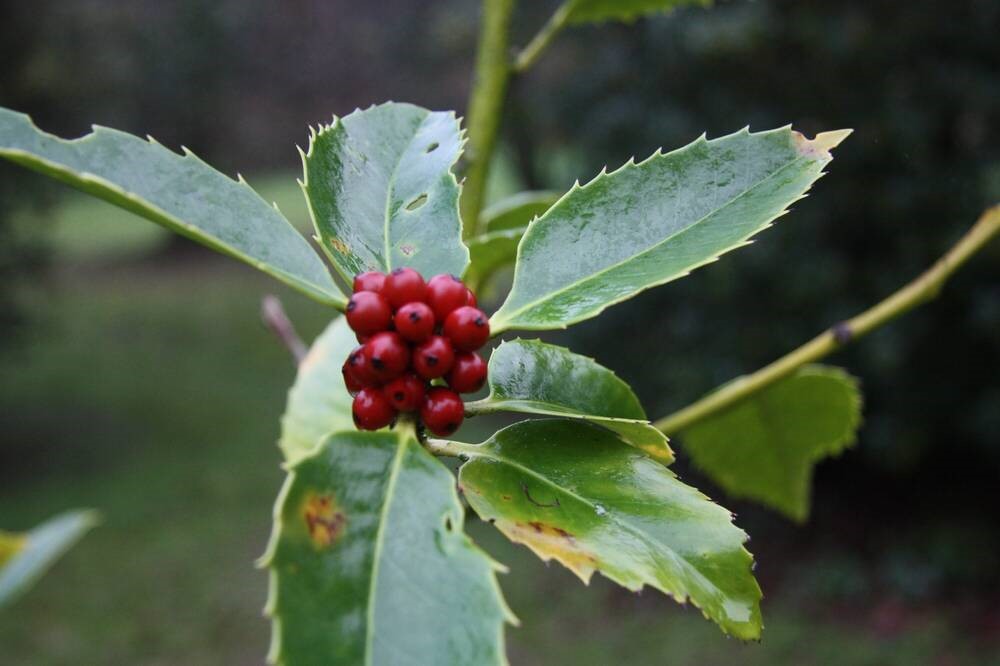 While people often associate holly with Christmas, there’s a lot more to discover about this diverse group of plants. I’d like to invite you to delve into the world of holly – you never know, you might find one you really like. Holly has long been believed to be a symbol of life and continuity. It has been adopted as an emblem of Christianity – the spiny leaves represent the crown of thorns, the berries signify the blood that was given by Christ as a symbol of salvation. It’s also said that holly will ward off evil and negativity – cutting one to the ground is thought to bring bad luck. Druids once placed holly in their hair and beards to keep away evil. Bringing holly inside to decorate homes at Christmas has been a tradition for many hundreds of years; decorating fir trees, as we do today, didn’t begin until the 1840s. And if you’re ever out in a thunderstorm, a holly bush is considered the safest place to shelter under, as the leaves act like mini lightning conductors and will hopefully prevent you from being hit.

At Threave, the holly collection has been added to since the School of Heritage Gardening (the only Scottish garden dedicated to the training of horticulturists) was gifted the land from the Gordon family in the 1960s. I have a particular fondness for this plant and like to add to the collection whenever possible.  The collection currently consists of over 70 different types of holly (Ilex). Some of these are species plants such as Ilex ciliospinosa (Asian holly), others are cultivars, such as Ilex x altaclerensis ‘Ripley Gold’, but they all have a few identifying characteristics. All Ilex have alternate leaves (i.e. they grow alternately up the stem); they are dioecious (male and female flowers are on separate plants), with the berries being produced on female plants; and the berries are toxic to humans. If you’re interested in our holly collection, you should visit Threave in the late autumn/winter to really appreciate these wonderful and interesting plants.

Threave’s wonderful garden has been created over the years by students of the Trust’s School of Heritage Gardening – and is a fine example of landscaped beauty. The garden is divided into a series of smaller gardens to showcase different styles, including a rose garden, rockery and walled garden. At the centre stands Threave House, designed in the Scottish Baronial style in 1871 for the Gordon family. Many of its rooms are displayed as they were in the 1930s.

Threave Garden & Estate is 1 mile west of Castle Douglas and only a short drive from Dumfries. For more information see: www.nts.org.uk/visit/places/threave-garden