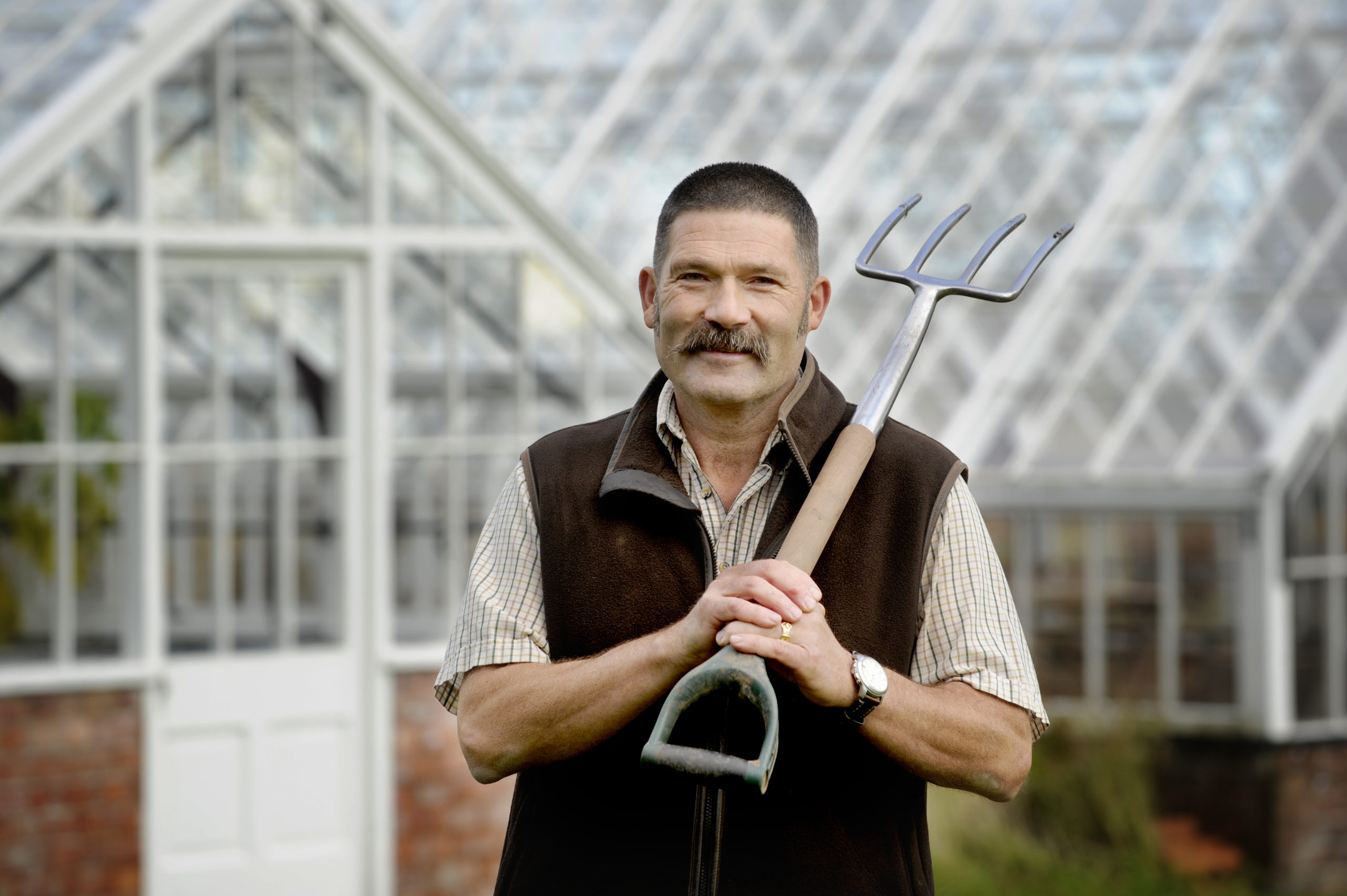 He’s the birdman of Marchmont. A gamekeeper turned gardener who has enjoyed a lifelong passion for all feathered creatures, domesticated and wild. Shaun Adams has been a key part of the grand restoration of a Grade A listed 18th century Palladian mansion in the Scottish Borders. As well as work on one of the finest arts and crafts interiors in Scotland, there has been a transformation of the 6,500-acre estate at Marchmont, near Greenlaw. The work includes tree planting and other measures to encourage wildlife. Enter Shaun, who became gardener five years ago after three decades as a gamekeeper. In that time his job has evolved from straightforward gardening – including in the magnificent walled garden – to looking after the wild birds and the bees.

This has built on his own lifelong love of birds – for decades he has kept, and successfully shown, birds and in the garden of his home on the estate he currently has at least 100 hens (including Light Sussex and Modern Game), ducks (including Indian Runners and Muscovy ducks) and geese (Nene or Hawaiian geese). And if any more proof of his passion was needed, his car number plate is B4 HEN. Shaun commented: “I’ve kept poultry all my life, my grandfather and my dad kept poultry. I’ve got all sorts and I used to show poultry as well, but I keep them as a hobby now. It is nice to rear something from an egg and see them right through. Everybody thinks I’m mad because I have all this extra work on top of my job; I’m up first thing in the morning taking the dogs out and doing the chickens. But it’s in my blood, I’ve done it all my life.”

His day job involves looking after 120 bird boxes, as well as a growing number of owl boxes. Shaun continued: “Last year we had 75% with birds in them, mainly the tit family; great tits, coal tits and a few nuthatches and some robins.” Shaun has become an expert in what the owl boxes should be like, working with a charity to get it right. The best, he says, are actually in barns – where the young ones can practice flying from beam to beam. A good box has a platform where the young ones can wander about and look at their new world. But at Marchmont they have more than this. There is now an Owl Temple – like an Ancient Greek temple to Athena – which is set on a tall carved pillar. It has been created by the renowned stone carver and sculptor Michelle de Bruin who has a studio nearby as part of Marchmont’s Creative Spaces which encourages the creative arts.

It was Hugo Burge, who, with his father, is behind the restoration project, that had the idea for the “rather spectacular” owl temple in the walled garden. He said: “I have spent some heavenly evenings watching barn owls scouring and floating across the landscape, some very precious and special interactions that strike to one’s core. I thought it would be extraordinary if we were able to encourage a barn owl into the walled garden. Gardening is new to me and what I love doing is closing my eyes and dreaming of what the landscape will look like in 20, 50 or 100 years. We have a new topiary avenue down the centre of the walled garden – it was a dream to imagine a barn owl flying down that little avenue through the mist one morning or late one evening.”

Relationship between arts, nature and humanity

The initial idea was a wooden temple but that blew over and broke. So, Hugh brought in Michelle. Hugh said: “I started to discuss whether it was an excessively potty idea to think about carving one out of stone and we both got more and more excited about it. The result is the extraordinary work she has created which I find a bit mind-blowing.- it is a wonderful symbol for craftmanship, something that is incredibly grand which we will hope will last for hundreds of years and something that really supports nature in a very beautiful way. It is something I am extremely proud of; it has been an unexpected journey and it still takes my breath away when I see it – bringing together the sensibilities of what we are doing at Marchmont.” Hugo describes taking on the renovation of Marchmont as “daunting” but at the same time he entered into it with pleasure, enthusing about the “relationship between arts, nature and humanity”. Hugh continued: “Everything about Marchmont is a celebration of creativity and that is a subject close to my heart. In a strange kind of way, if you look back to the 18th century, although the buildings were a great demonstration of building prowess, elegance, and grandeur, often they feel very comfortable in the landscape and the environment. There is a sensibility to nature and a sense of awe and closeness to nature – it is an unusual balance that seems to work.”

Shaun’s introduction to gardening growing up in the 1960s in Annitsford, North Tyneside was less grand, but just as passionate. He said: “My dad kept an allotment, so I was brought up growing veg and in the garden my dad had chickens. I’m over the top with my garden, hanging baskets on the kennels. I just like to keep the place tidy.” Ever keen to embrace a challenge, Shaun is now looking after a quarter of a million bees in hives the estate brought in to improve biodiversity. He said: “That was totally new … it is unbelievable how much there is to learn about, they are a marvellous little insect.”

Shaun went on a beekeeping course and had a mentor for a year, and now produces dozens of jars of honey each year. Hugo said: “We don’t get enough honey to sell it. Really it is a treasure and a treat for myself, my family and occasional lucky friends. And Shaun gets some too. Hugh continued: “It (keeping bees) felt like a very natural thing to be drawn to … a small way in which we could help to create a sense of balance at Marchmont between our human needs and requirements and the natural environment. And it is hard not to be swept up by the concerns around declining bee populations; having taken some interest in this it is very alarming, and it felt like something we could do in a practical, small way to support the bee environment and the eco-system at Marchmont.” And he is full of praise for Shaun: “He is passionate about nature and the collections of his own ducks and geese which he nurtures with pride. He also took up the challenge of beekeeping with enormous relish. He has a wonderful hands-on expertise with nature.”

1 thought on “The bird man of Marchmon”