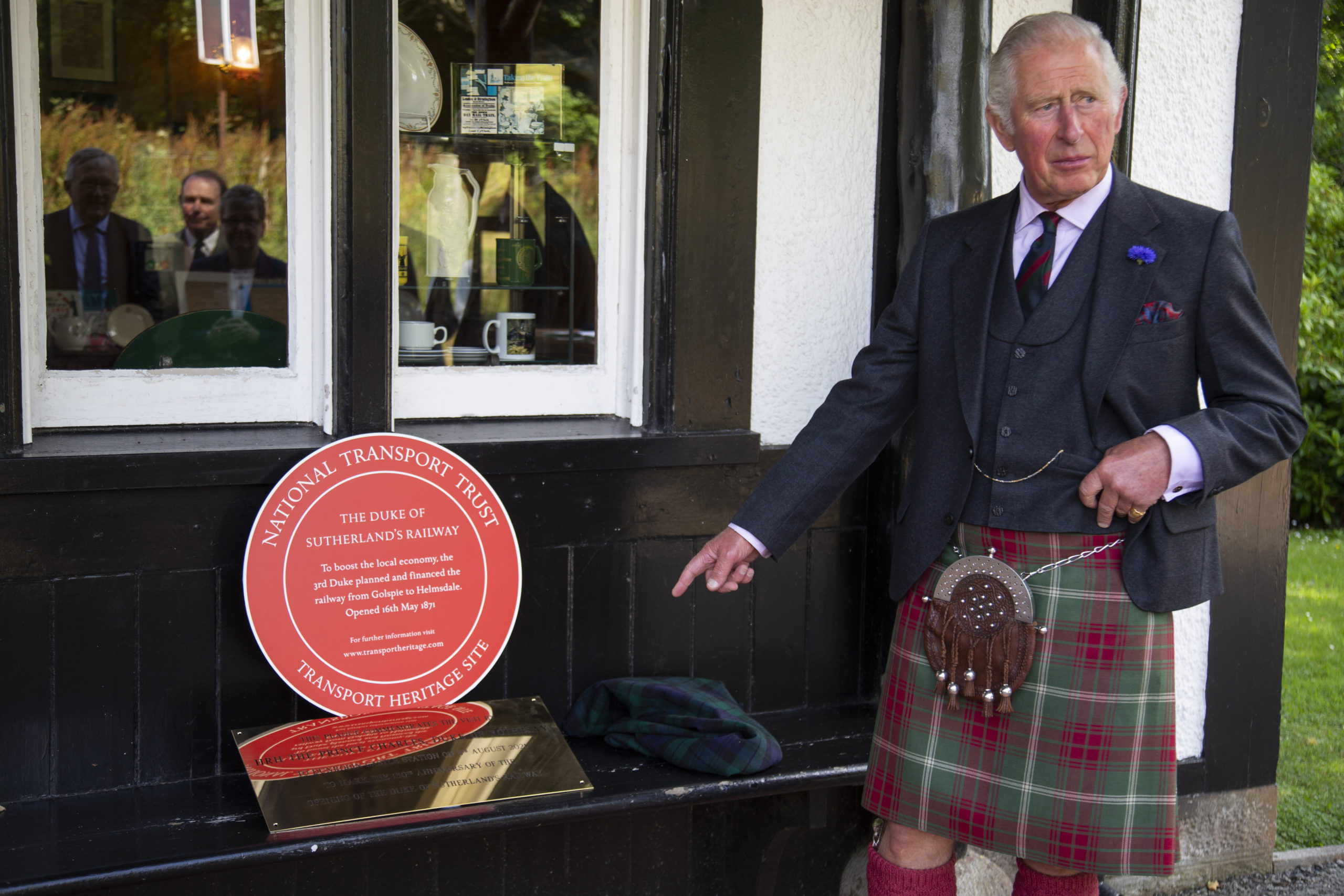 His Royal Highness joined a reception where he met with guests including representatives of the railway industry and the neighbouring castle. His Royal Highness then toured the station with The Honorary Station Master, Daniel Brittain-Catlin.

The only part of the national rail network to have been planned, financed and opened by one person

The Duke of Sutherland’s Railway is the only part of the national rail network to have been planned, financed and opened by one person. Running from Golspie to Helmsdale it opened on 16 May 1871. In September 1870 an isolated section some 17 miles long opened from Dunrobin (a mile north of Golspie) to West Helmsdale (the temporary terminus). This was opened in September 1870 by HRH Princess Helena.  Intermediate stations were opened at Brora and later Loth.

Dunrobin Station (including platform and building) remains in the ownership of the Sutherland Estate and is believed to be the only such station on the network.  Trains to Dunrobin are operated by Scotrail’s Far North Line service which runs between Inverness-Thurso/Wick. The station is situated at the top of the drive leading to Dunrobin Castle and open to the public throughout the castle season from April-October.

In 2019/20 it was used by 1240 passengers. The cost of the railway was a remarkably cheap £5007 per mile, as the Duke did not have to buy the land. The equivalent sum today for the whole line would be approx £10.5million.  The station was used exclusively by the Sutherland family and guests from 1871 until the second world war. After the war it was opened to the general public but was closed (to the public) in 1965 under the Beeching cuts.

In 1985 it reopened on summer Sundays , but now has a full service when the castle is open. The station has always been a request stop and intending passengers need to hold their arm out to the train driver, like a bus stop. The original low platform is still in use and boxes with three steps are provided so passengers can reach the level of the train.

The most northerly of Scotland’s Great Houses

Before leaving His Royal Highness met local volunteers from East Sutherland who had helped in their communities during the lockdowns over the last 18 months. Dunrobin Castle is the most northerly of Scotland’s Great Houses and the largest in the Northern Highlands with 189 rooms. Dunrobin Castle is also one of Britain’s oldest continually inhabited houses dating back to the early 1300’s, home to the Earls and later Dukes of Sutherland. The Castle, which resembles a French chateau with its towering conical spires, has seen the architectural influence of Sir Charles Barry, who designed London’s Houses of parliament, and Scotland’s own Sir Robert Lorimer.

Dunrobin Castle is open to visitors annually from the 1st of April to 31st October where guests can walk through several of the castle rooms and even experience a Falconry show in the Formal Gardens.