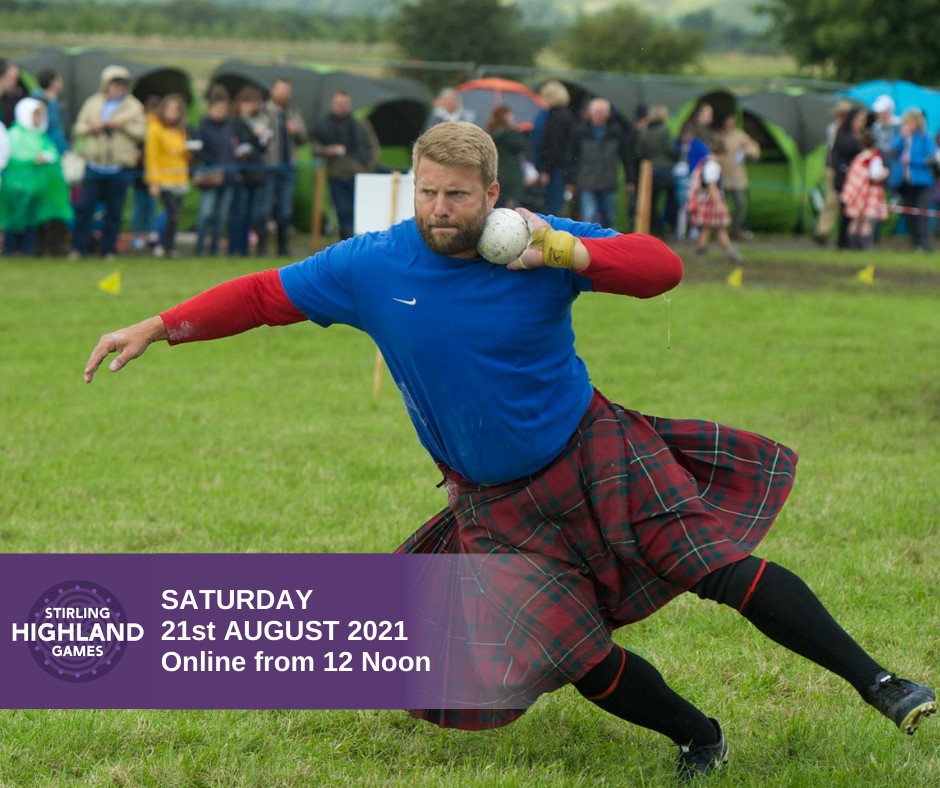 Traditional heavyweight competitions, a pipe band and cookery demonstrations are among the online events showcased at Stirling Highland Games this month.

Spectators can watch competitors take part in hammer throwing, shot put and tossing the caber via a dedicated video channel.

They can also tune into the gruelling Bruce Challenge, unique to the Stirling Games, which sees strongmen carrying two boulders weighing over 164kg as far as they can.

The popular annual gathering was originally due to take place in-person at Stirling Games Village but was replaced with a virtual programme because of Covid safety concerns.

It is one of just a handful of Scottish Highland Games going ahead in any format this year and President Matt McGrandles hopes spectators will support Stirling’s event by spending £5 on tickets to view the action through an on-demand Vimeo channel.

He said: “We really wanted our gathering to happen in-person this year but in the interests of safety we had to adapt our plans and have instead produced a cracking line up of events for people to enjoy.

“The committee worked hard to come up with something special and we’re proud to be one of just a handful of Scottish Highland Games events taking place during 2021.

“What we need now is for the people of Stirling – and the thousands of overseas visitors who usually travel to see us – to support us virtually by tuning in to a day of fun and competition.

“More than 140,000 viewers watched last year’s virtual event and we have even more to offer our fans this year.

“We’re looking forward to a fantastic day while the online ticket sales will boost our plans to come back bigger and better when we return to our traditional live event in August 2022.”

Tickets can be pre-ordered now – via www.vimeo.com/ondemand/stirlinghighlandgames21 – and the Games can be watched anytime from 12 noon on August 21.

The packed programme begins with the heavyweight competition which sees five invited athletes competing against each other in hammer tossing, weight over the bar and other demanding events before taking on the Bruce Challenge.

One of the competitors is Falkirk strongman Kyle Randalls who found fame in Netflix series `Home Game’ featuring unusual sports from around the world.

He said: “I usually compete in around 35-40 Highland Games every year but they are few and far between just now so it’s great that Stirling has gone ahead with a virtual event and given us the chance to compete again.

“Stirling Highland Games is very close to my heart and I hope everyone will support the 2021 virtual show as we look forward to getting back to live events next year.”

The heavyweight contest is followed by an adaptive event with six competitors – all injured military veterans.

The five men and one woman demonstrate their strength in a series of challenges – smashing seven world records in the process.

There is music from the Balaklava Pipes and Drums, the band of the Argyll and Sutherland Highlanders Regimental Association, before the focus switches to the food and drink show beginning with a cookery demonstration by Tony Singh.

Stirling Highland Games has become famous for its food and drink offering which Mr McGrandles has built up and expanded since the social enterprise he founded, Ceangail CIC, took ownership of the Games in 2013.

This year’s event captures award-winning food and drink producers from across Scotland on film and showcases them in an episode which also includes clips from a variety of Scottish restaurants and a feature on where to enjoy the best burgers in Stirling.

The final section is a creative event which presents a talk on Stirling’s Heroes and Villains from well-known historian Dr Murray Cook and a performance from Stirling Gaelic Choir.

The 2021 Highland Games has been sponsored and grant-funded by various organisations including Active Stirling, EventScotland, Scotland Food and Drink and Forth Valley Chamber of Commerce.

She said: “We’ve a longstanding relationship with Stirling Highland Games and as part of Stirling’s community, we are keen to support important local events.

“The Games is a great day which brings people into Stirling and is very much a part of the city’s heritage and I look forward to watching it online this year.”

For more details on the Games, visit www.stirlinghighlandgames.com