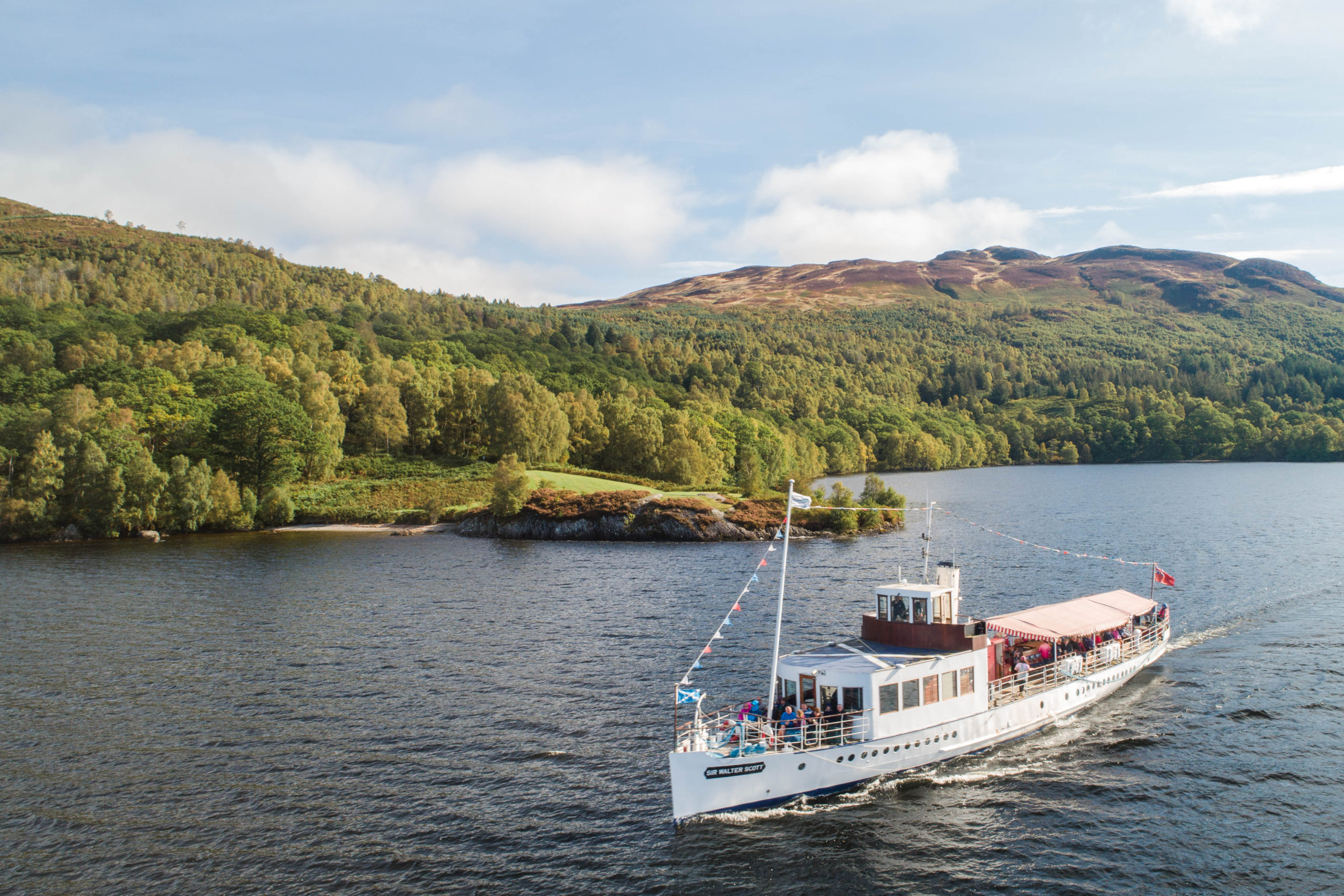 The future of this national historic maritime treasure is under threat.

The charitable trust that looks after the 121-year-old Sir Walter Scott Steamship has launched an urgent appeal to preserve the iconic steamship and get her back sailing on Loch Katrine. The SOS appeal to ‘Save our Steamship’ seeks to raise £500,000 to restore the historic steamer, which requires a new boiler and other significant repairs. These funds will have to be secured by the end of this year to allow work to begin in time to allow her to resume sailing during summer 2022 and to avoid further deterioration. She has not sailed since the annual inspection in January 2020 which revealed hairline cracks in the boiler which led to it being condemned.

Launched away back in 1900, Sir Walter Scott Steamship is named after the novelist and poet, born exactly 250 years ago, whose Lady of the Lake poem, published in 1810 put Loch Katrine and the Trossachs on the map, resulting in it becoming the ‘Birthplace of Scottish Tourism’. Crowds have continued to flock to Loch Katrine to sail on the Steamship and enjoy this special part of Scotland in the heart of the Loch Lomond and The Trossachs National Park which is also the source of Glasgow’s main water supply.

James Fraser, Trustee and CEO of the Steamship Trust, said: ‘’Our efforts to restore the Steamship have been severely hampered by the impact of Covid 19 lockdowns which meant we have not been able to generate enough trading income to repair and restore the steamship to full sailing. Sadly, as a result of the prolonged cessation of sailings the Steamship has rapidly deteriorated and this is a situation we are anxious to reverse quickly as there is a real danger of us losing the boat permanently. Many generations of visitors have had enormous pleasure sailing on the historic Sir Water Scott Steamship. We have to act now to make sure that current and future generations will be able to enjoy cruises on this national maritime heritage treasure.’’

The Steamship plays an important role in supporting the fragile Trossachs rural economy and is a significant local employer, with many additional indirect jobs dependent on the Steamship being in operation.  As well as providing much needed transport links on the loch for sightseers, cyclists and walkers, the vessel can carry 220 passengers and is accessible for all levels of mobility and sensory needs. When restored the Steamship will also be a leading example of an eco-friendly water transport visitor experience in Scotland with low carbon emissions due to a ground-breaking hydrogen-based fuel mix that it is planned to use.

Financial support for help to save this important national maritime heritage asset which brings so much pleasure to so many people can be made on site at Loch Katrine or via the SOS appeal website: www.saveoursteamship.com

-Sir Walter Scott was launched in 1900. She was Loch Katrine’s fourth steamer. The first being Gypsy, introduced in 1843, providing competition to ‘Water Witch’, an eight-oared wooden galley. Gypsy was to sink under mysterious circumstances just a week later, allegedly by the ferrymen who thought the steamer’s arrival threatened their jobs. Rob Roy and then Rob Roy II steamers followed until 1900, when Sir Walter Scott was introduced.

-Sir Walter Scott was commissioned to replace the ‘Rob Roy II’, which was reaching its end life. She was built at Denny’s Yard in Dumbarton on the River Clyde. After completing her trials on the Clyde, she was dismantled for transportation to Loch Katrine.

-Nearly half of the £4,269 purchase price was the delivery charge. This is understandable considering that she was transported in sections by barge up the River Leven and Loch Lomond to Inversnaid. From there, teams of horses lugged the steamship up the steep hills to Stronachlachar; there she was reconstructed and launched for the first time into Loch Katrine in 1900.

-In 1900 the newly launched Sir Walter Scott shared sailings in her first year with Rob Roy II. The first master of the steamship was Captain John McKinnon.

-The original steam plant remains intact, with a pump that draws feedwater from the loch for the boiler. In 2007 the operation and ownership of the steamship moved to an independent charitable trust.

-In 2008 she moved from coal power to biodiesel and was soon joined by another cruiser ‘The Lady of the Lake, named after Sir Walter Scott’s famous poem and this year by ‘Rob Roy III’.

-2020 was set to be a high-profile year for the Sir Walter Scott Steamship, marking the 120th year of sailing on Loch Katrine. Sadly, the double blow of Covid-19 restrictions and boiler issues meant that not only was she unable to sail in her celebration year, but her long-term future is under serious threat.

-The Steamship has kept with the times, adapting over the years to use more environmentally friendly fuels. Green biofuel will be used when the Steamship is back sailing, which will substantially reduce carbon emissions.

-The Steamship sails through Great Trossachs Forest, the second largest National Nature Reserve in Britain, with a new forest of 2.5 million native trees.

-In 1859 23.5 miles of new aqueducts and tunnels opened linking Loch Katrine and Glasgow. Opened by Queen Victoria, this feat of Victorian engineering provided clean water to the city of Glasgow for the first time. Its arrival transformed the health of a vast population and is still in operation today. Up to 120 million gallons per day can be extracted from the loch via the gravity operated network of tunnels and aqueducts. The famous Tennant’s lager is brewed with water from the loch.