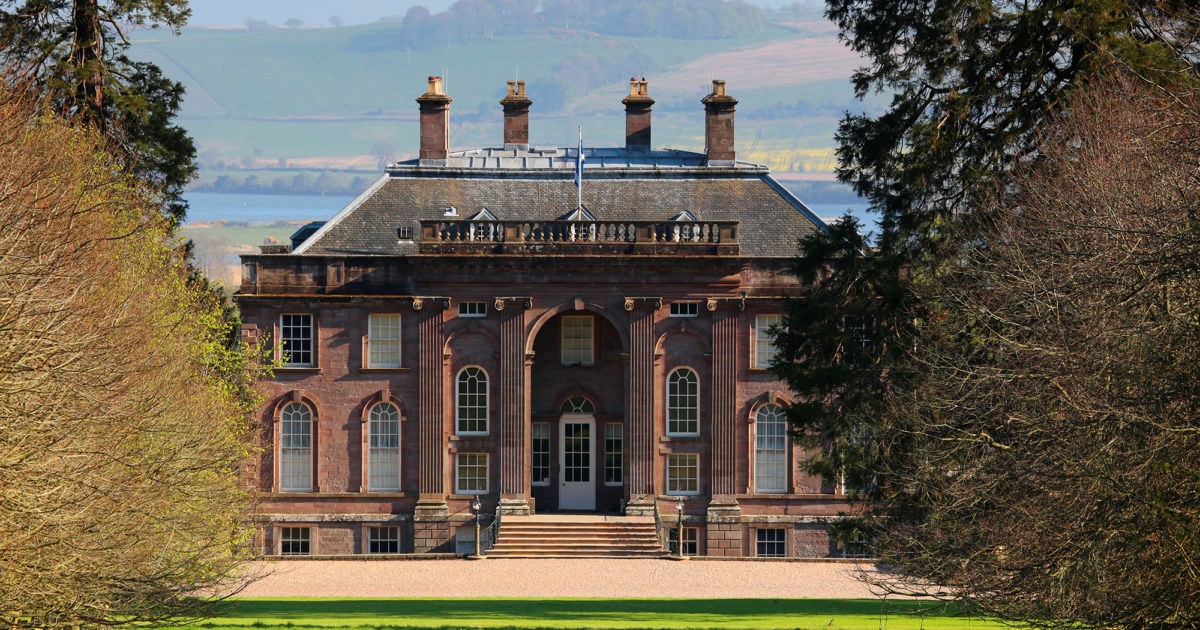 Work has been underway at House of Dun, near Montrose, on one of the National Trust for Scotland’s (NTS) most significant projects of the year. The NTS are creating a heritage park that will encompass hundreds of years of history and tell the stories of the landscape and its people. Central to the re-imagining of House of Dun will be the creation of a new home for the Angus Folk Museum collection, which was amassed by Lady Maitland of Burnside in the first half of the 20th century. Her granddaughter, Caroline Graham-Watson, swung the first sledgehammer to join together some of the courtyard buildings, where the collection will be housed.

The Culzean of the east

House of Dun was designed by William Adam for David Erskine, 13th Laird of Dun and a judge of the Court of Session. It was built in 1743 to replace the medieval tower house which had been home to the Erskine family since 1375. The house is surrounded by gardens, which were laid out by Lady Augusta FitzClarence, daughter of William IV and the wife of the Hon. John Kennedy Erskine. A large estate encompasses the house, gardens, policies and farmland, as well as the old Dun kirk (visited by John Knox in the 1550s), the Erskine family mausoleum, the Montrose Basin Nature Reserve and a 2-mile stretch of the River Esk. House of Dun has been in the care of the Trust since 1980 and was opened to the public in 1989. We’re hoping that the new presentation of the 320ha estate will make it ‘the Culzean of the east’!

The £714,000 project will convert under-utilised space in the house’s courtyard area to create a new home for the Angus Folk Collection. This space will tell the wider stories of the Dun estate, the county of Angus and its impact on Scotland’s history; explore the lives of rural communities; and celebrate the estate’s important natural heritage. Work on the project was delayed due to the pandemic, but the NTS expect to open the house to the public in mid-June. The refreshed House of Dun will feature multi-sensory interpretations on subjects ranging from toys of the past and the Declaration of Arbroath to hidden Jacobite secrets and agricultural heritage, as well as costumed story-telling, new cafés and shops.

The National Trust for Scotland’s Chief Executive, Phil Long said: “It is with enormous pleasure that we’re finally able to begin work on House of Dun. In terms of scale and ambition it’s the largest project that we’re embarking on this year. I’m sure that, when we open the gates for the first time this summer, visitors from near and far will be impressed by what it has to offer.”

Phil continued: “Its reopening will no doubt contribute to the growing interest in the east coast of Scotland as a destination for visitors created by other important cultural landmarks such as V&A Dundee, the newly expanded Aberdeen Art Gallery and Museum, and nearby Glamis Castle and Hospitalfield House. More than any other property, it will bring together everything that the Trust does. House of Dun presents wealth and extravagance alongside agricultural toil, with both as important as the other to the story of Scotland. This place is as much about the manicured, ornamental gardens that surround the Georgian house as it is about Montrose Basin Nature Reserve and its abundance of wildlife. We love this place and we hope to shine a new light on a hidden gem.”

Designed with Georgian pride and baroque extravagance the House of Dun is every bit the perfect 18th century laird’s home set amid glorious gardens and woodland.