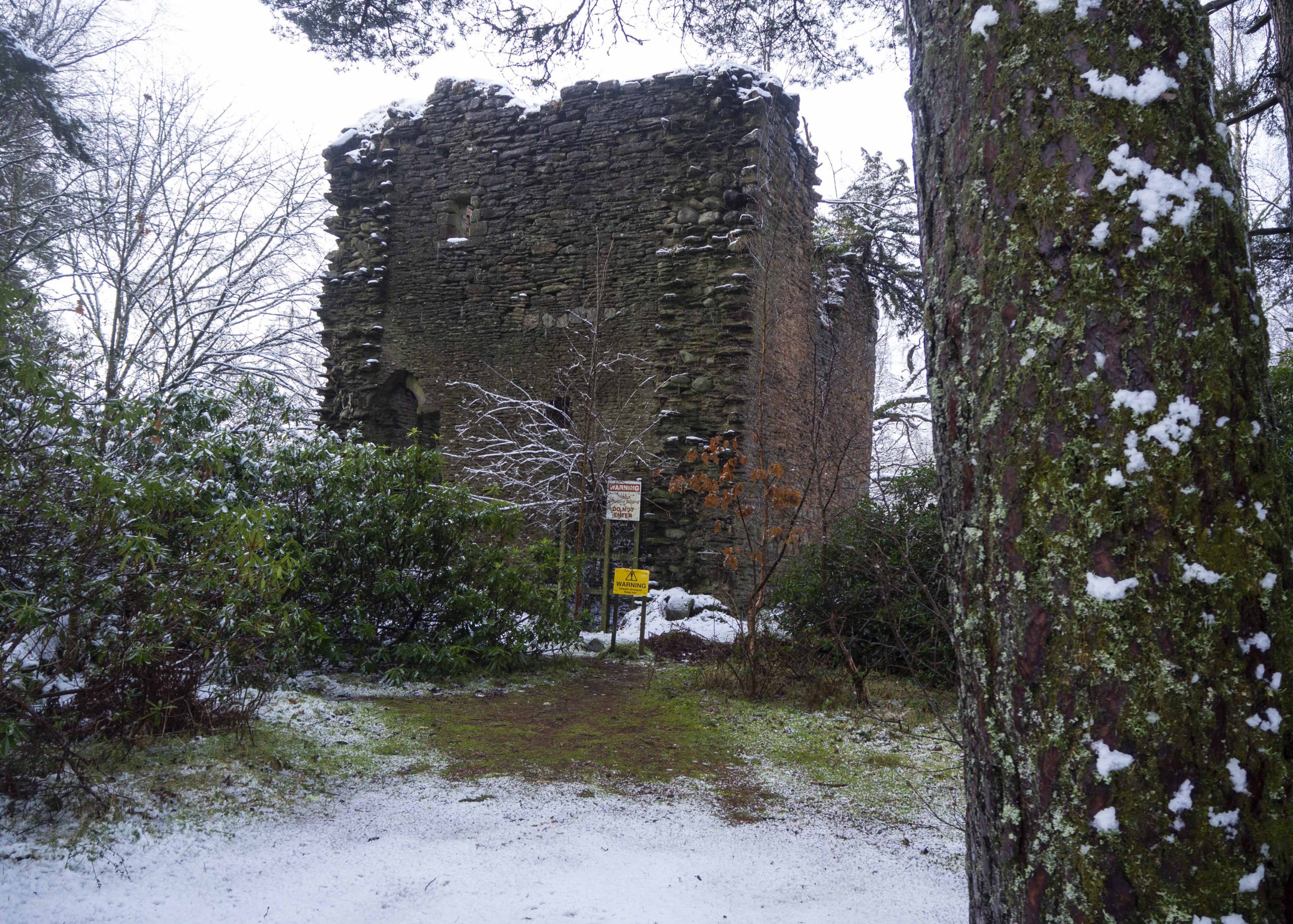 An ancient Strathearn castle is to be preserved if ambitious plans to prevent it collapsing further and to open it up to the public are approved by Perth and Kinross Council, but the charity which has taken on Castle Cluggy at Loch Monzievaird for the benefit of the nation admits it is a real “doer-upper”.

Situated on the northern shore of Loch Monzievaird, nestled in the heart of the private Ochtertyre estate minutes from the town of Crieff, Castle Cluggy is one of Strathearn’s ancient dwellings and was the ancestral seat of the Murray baronets of Ochtertyre for several centuries. Now, as befits its dark, feudal past, the drawbridge is potentially being lowered again on access to the Category B-listed structure.

One of Scotland’s least-known historic castles

One of Scotland’s least-known historic castles, Castle Cluggy is situated on a little peninsula called the ‘Dry Isle’, approached in former times only by a drawbridge. The nearby crannog is said to have been used in days gone by as a place of containment for any prisoners held by the castle. Despite its ruined state, this hidden gem hides an incredible history. The castle is traditionally said to have belonged to John Comyn III, known as ‘the Red Comyn’, an important figure in the Wars of Scottish Independence, and Guardian of Scotland for a time. He is probably best known for having been stabbed to death by Robert the Bruce at the high altar of Greyfriar’s Kirk in Dumfries in 1306. One of the possessions of the powerful earls of Strathearn, the site was a pawn in extended blood feuds between the Drummonds and Murrays until ownership was settled in favour of the Murrays. Fortified since at least the 14th century – the fortress was referred to as ‘ancient’ in a charter of 1467 – much of the original castle has been destroyed revealing an impressive square tower with thick walls and arrow slots.

Castle Cluggy Charitable Trust has been set up by Keith Murray-Hetherington, in whose own veins runs the blood of the Murrays. Trust chairman Keith has a deep love of Scotland, its history and heritage, especially castles – which he describes as an active passion. He has made it his mission to preserve what is left of Castle Cluggy and to make it easily accessible to all. Keith told the Scottish Banner: “History buffs and local residents will probably know the old tower, which is still easily discernible as a castle but somewhat spoilt by a multitude of warning signs and protective fencing advising of the dangers of falling masonry. The charitable trust’s purposes are the advancement of heritage and education, in particular through the maintenance, repair, and preservation of the physical remains of the structure known as Castle Cluggy, a building of major regional importance and national significance, for the benefit of the public”.

Keith first visited the estate on holiday as a child but it was only through a chance discovery that he stumbled across the little-known castle hidden by trees, and the connection with the Murray clan sparked his interest in bringing the ancient structure back to good health. He explained: “You cannot see this property from the road and you would not even know it existed, but when you cast your eyes on it for the first time, it undoubtedly brings out the romantic in you. The silhouetted outline of the building looks very dramatic but there are trees growing out of the walls which will cause the castle to collapse further if not removed. We are not rebuilding or restoring the castle to its original appearance, but we are focussed on repairing, stabilising, and preserving the structure in the form it is today for future generations to enjoy. It would have been so easy to allow the castle to collapse into a picturesque ruin but the huge task of rescuing one of the oldest fortresses in Scotland has begun. It is a labour of love. I arise to this labour every morning with increasing desire to complete it.” Keith continued: “My vision is for the widest possible general public to have the fullest access to as much of Castle Cluggy as possible. Ideally, new steps and hand rails up to the castle, and a viewing platform, will be built to allow people of all ages and abilities to enjoy the ancient historical site”.

Substantial work is needed to conserve Castle Cluggy for future generations. Trustees are currently reviewing the quantity surveyor’s report to get a clearer idea of costs for the preservation work, as well as discussing details of the way forward. Castle Cluggy Charitable Trust head trustee Keith Murray-Hetherington said the charity is also actively working with partners to offer young people training in heritage skills, along with residents, community groups, and schools, and it is hoped that the pandemic situation will improve soon so that work can get underway. Those interested in saving the historic castle can also donate to the charity. Keith said: “It is hoped that people worldwide may consider helping with these efforts by making a donation, whatever the amount, to save the castle for future generations”. Products featuring Castle Cluggy are also available to buy, with the proceeds going towards the conservation work. These include a limited-edition fully-illustrated book – The History of Castle Cluggy – ancestral seat of the Murrays of Ochtertyre – Christmas cards featuring a wintry scene of the old tower by local photographer the Strathearn Snapper, and limited edition prints of the castle painted in watercolours by Scottish artist Kimberley Smith.

For more information, contact Keith at [email protected] or call: +44 (0)7788 111729 or go to the Castle Cluggy website at: www.spanglefish.com/CastleCluggy