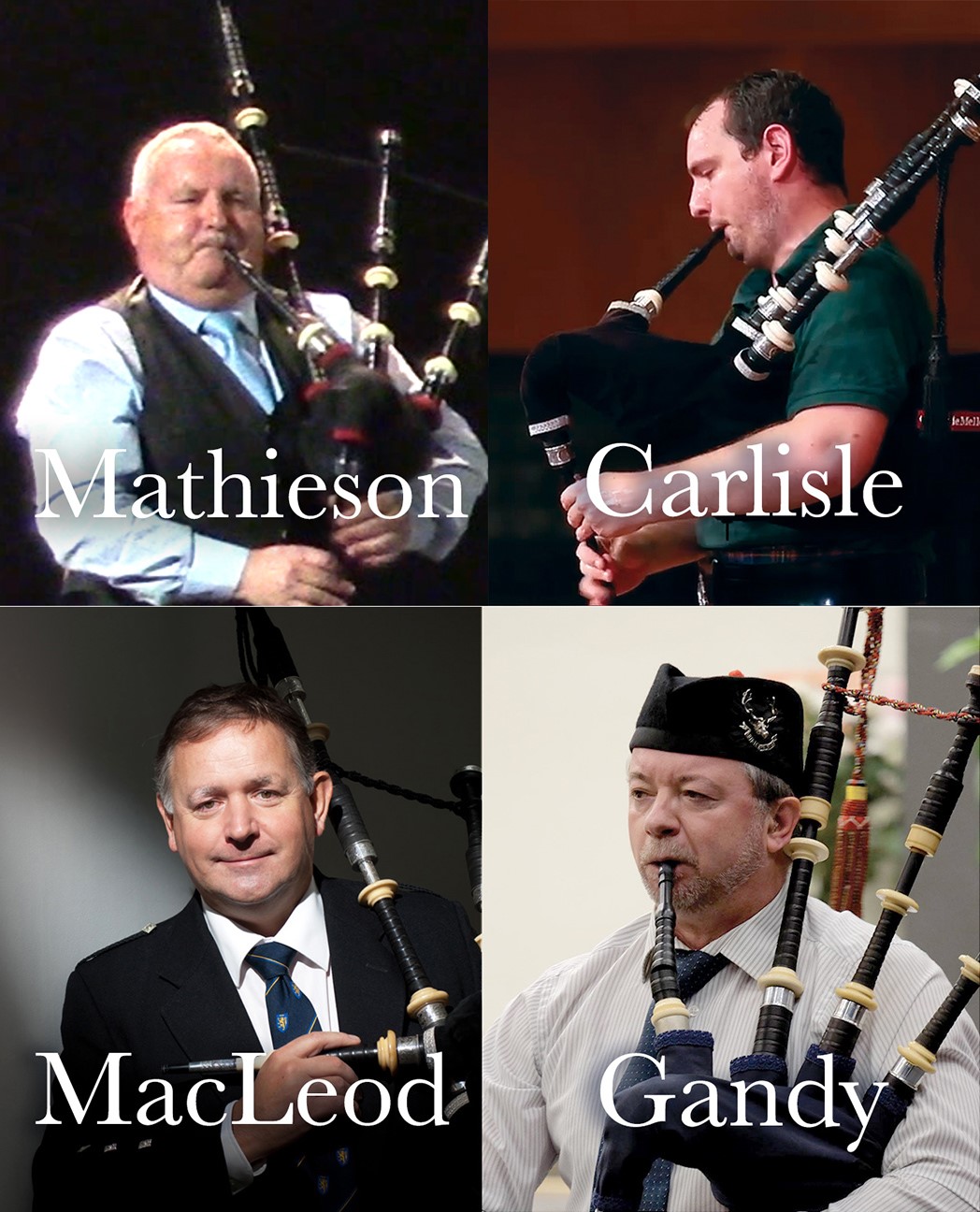 Pipe Major Robert Mathieson (Scotland) has been at the forefront of piping for over 30 years. Having been a young piper in Shotts and Dykehead Caledonia Pipe Band, he took over as Pipe Major from 1987-2010, leading the band to win over 30 major grade one championship titles, including 5 world titles, as well as 9 champion of champions titles. He is the only Pipe Major to have won the worlds 5 times, playing his own compositions and arrangements, opening each winning medley with one of his own tunes.

Bruce Gandy (Halifax, Nova Scotia) was a member of the 78th Fraser Highlanders Pipe Band when they were the first non-Scottish pipe band to win the World Pipe Band Championships in 1987. His solo awards include the Canadian Gold Medal, Gold Medal at the Northern Meeting, Gold Medal at Oban, and Bratach Gorm. He is a 3-time winner of the MacCrimmon Memorial Cairn for Piobaireachd and is a Vancouver Indoor 6-Time Metro Cup Winner.

Andrew Carlisle (Northern Ireland/Pittsburgh) has won the A Grade Strathspey & Reel at Oban, the A Grade Piobaireachd & Overall at The Cowal Highland Gathering, US Gold Medals for both Light Music & Piobaireachd, and three All-Ireland titles at Senior level. He’s 3-time winner of the Macallan Trophy at Lorient, Brittany, France. Andrew holds the prestigious positions of Professor of Music and Director of Piping at Carnegie Mellon University.

Roddy MacLeod MBE (Scotland) served as Principal of The National Piping Centre in Scotland from 1996 -2020. In 2003, he was made a Member of the Order of the British Empire by the Queen in recognition of his services to piping. In 2004, was awarded the Glenfiddich Spirit of Scotland Award for Music. Inducted into the Scottish Traditional Music Awards Hall of Fame in 2012, he is a 10-time winner of the Piobaireachd at the Glenfiddich and has won the overall title five times. He led the Scottish Power Pipe Band to over 45 Grade 1 Championship prizes.