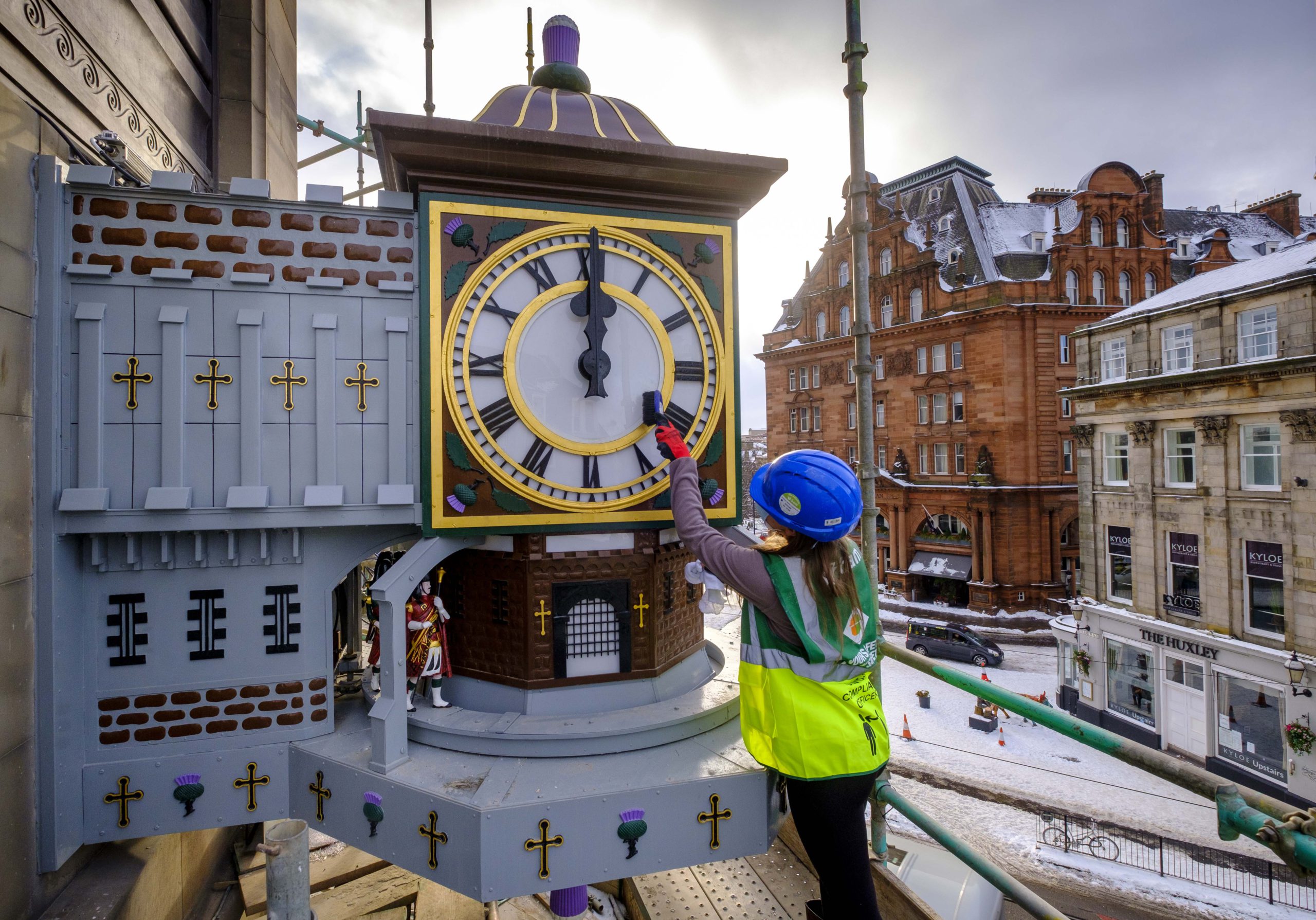 One of Edinburgh’s best-known landmarks, which for decades has been a meeting place for people in Scotland’s capital, has been restored by Johnnie Walker. The beautiful cantilever clock is located on the corner of Princes Street and Hope Street at the heart of the city, making it the ideal rendezvous point for people meeting before an evening out. It is known locally as the ‘Binns Clock’ after the former department store that first installed it in 1960.

Sadly, the classic timepiece had fallen into a sad state of neglect and disrepair over recent years. But it has now been meticulously restored to its former glory as part of the Johnnie Walker Princes Street development and unveiled as a symbol of hope for future generations who will meet again under the clock, at the whisky visitor experience, in the future. The clock has been restored over the past year by The Cumbria Clock Company, one of the UK’s leading specialist restores, which has worked on some of the UK’s most famous timepieces, including The Great Clock (Big Ben) and the Royal Liver Building, led the restoration.

They dismantled the timepiece to study its original mechanics and colours, including the hand painted Highland figures that march out of the clock to mark the hour and half hour, before meticulously rebuilding it. They have also repaired the musical mechanism which plays the traditional Scottish tunes Caller Herrin and Scotland the Brave every half an hour as the kilted figures march out of the clock. In keeping with tradition, the Highland figures will emerge to the musical accompaniment every seven and 37 minutes past the hour.

Barbara Smith, Managing Director of Diageo’s Scottish Brand Homes, said: “The restoration of the clock has been a lovely part of our work at Johnnie Walker Princes Street. Its heritage and connection with the local community is so poignant, particularly now when people are desperately missing being able to meet and socialise together. We wanted to unveil the restored clock this year as a symbol of hope for the future, and we can’t wait to see future generations meeting under the clock at Johnnie Walker Princes Street, before enjoying a wonderful day or night out in Scotland’s capital city.”

Mark Crangle from the Cumbria Clock Company said: “It has been a meticulous process restoring the clock to its original condition. We had to delicately strip back worn paintwork to source and match the clock’s original colours and gold trimmings, and we spent a great amount of time on the speed and timings of the bells, tunes and pipers to ensure it all matched perfectly. Working on this restoration project has been such a privilege and I’ve really enjoyed hearing the stories of what the clock means to locals and how it’s played a role in so many special memories. These stories really consolidate why we do what we do, and we can’t wait for Edinburgh residents to now be able to enjoy the clock again in all its grandeur.”

Johnnie Walker Princes Street will tell the 200-year-old story of the world’s best scotch whisky across an eight-floor multisensory visitor attraction. Due to open in summer 2021, the whisky experience will feature rooftop bars, private dining areas, modern sensory tasting rooms, personalised tour and tasting experiences, and live performance areas. The opening of the state-of-the-art visitor centre is part of Diageo’s £185m investment into the transformation of its Scotch whisky experiences, which will also see investment into 12 of Diageo’s Scotch whisky brand homes and the revival of lost distilleries Port Ellen and Brora.