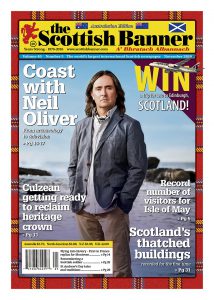 November 30th is a very important date on the Scottish calendar with Scots at home and across the world celebrating St Andrew’s Day. St Andrew is the patron saint of Scotland and the celebration on November 30th is often regarded as the start of the Scottish winter celebrations that take place.  No doubt many readers will also take part in St Andrew’s Day celebrations whether it be a large formal event or a smaller casual affair at home. Some may not be aware that nations such as Russia, Romania, Italy , Barbados and Greece also have St Andrew as their patron saint.

In the Scotland the early Picts modelled themselves after St Andrew as he was considered to have qualities and charisma they wished to emulate, qualities that seem to continue for Scots today. Though St Andrew was not born in Scotland, he was a native Bethsaida, and a fisherman of Capernaum and brother to Simon Peter. The people of Scotland became motivated by the good deeds as one of Christs direct disciples. St Andrew was one of the Twelve Apostles (disciples of Jesus) and brother of St Peter. One story on St Andrew  claims that he actually came to Scotland and built a church in Fife. This town is now called St Andrews, and the church became a centre for evangelism, and pilgrims came from all over Britain to pray there. Andrew’s connection with Scotland relates to the legend that some of his remains were kept at the site that is now the town of St Andrews. A chapel was built to house the remains and became a place of pilgrimage.

When it comes to gifts given by saints, Saint Andrew has given Scotland a very special gift. That is the Saltire – the diagonal white cross on a blue background. St Andrew is believed to have died on a diagonally transversed cross which the Romans sometimes used for executions and which, therefore, came to be called St Andrews Cross. It is said that he believed himself unworthy to be crucified on a cross like that of Christ, and so he met his end on a ‘saltire’, or X-shaped cross (St Andrew’s cross) which became his symbol. Strange as it may seem, our covenanting forefathers, do not appear to have had a lot of use for saints in general, yet do seem to have been very proud to have the St Andrew’s cross on their banners. This particular saint also has his name used on more than fifty parishes which choose to claim him as their patron saint. The areas where his name is mainly used are most commonly in cathedrals, churches, educational institutions as well as some towns.

Yet although the parishes of St Andrew, have been greatly used in Scotland for churches, the name has been used also for parishes also. In fact one particular location, which is Monike and is on the River Tay also claims connection with the saint’s shrine. Today visitors to St Andrews can visit St Andrews Cathedral which is Scotland’s largest and most magnificent medieval church. The cathedral dominated Scottish religion until 1560, as headquarters of the medieval Scottish Church. Even in its ruinous state, the cathedral remains a prominent landmark highly visible from the sea.

But November is famous for more than St Andrew’s Day- it has more to offer us than many other months do. For November also includes in its list of another very famous day – and that is Armistice Day. The first Armistice Day was held at Buckingham Palace, when King George 5th hosted a Banquet of Honour of the President of the French Republic during the evening hours of November 10, 1919. The first official Armistice Day events were subsequently held in the grounds of Buckingham Palace on the morning of 11 November 1919. This was to set a day of the trend for a day of remembrance for decades to come.

Some years later, in 1919, South African Sir Percy Fitzpatrick proposed a two-minute silence to Lord Milner, This has been a daily practice in Cape Town from April 1918 onward after being proposed by Sir Harry Hands, and within weeks it had spread through the British Commonwealth after a Reuters correspondent cabled a description of this daily ritual to London. People observed a one of more commonly a two-minute silence at  11am local time. It was first made as a sign or respect for the 20 million people who died in the war, and in the second minute dedicated to the living left behind, generally understood to be wives, children and families left behind but deeply affected by the conflict. Armistice Day – held on the 11th of this month commemorates the signing between the allies and Germany at 11am on that date this month. Although hostilities continued in some areas, fighting the armistice, when it was first signed, it essentially brought an end to four years of fighting in the First World War.

Even today in Britain, it is tradition to pause for a two minute silence at 11am on this day to remember those killed in the two world wars and the 12,000 British servicemen killed or injured since 1945. Armistice was originally signed in French military commander Ferdinand Forch’s railway carriage in the remote North of Paris at 5am on 11 November 1918 and came force six hours later at 11am (Incidentally, in 1940 Hitler forced the French to sign an armistice on German terms in the same railway carriage). Forch was in charge of leading the negotiations and signing the agreement which made it impossible for the German army to recommence fighting. The treaty of Versailles signed six months later acted as the lasting peace treaty between the nations.

Armistice Day is commonly referred to as Remembrance Day – they both refer to November 11th and this year will fall on a Friday. This should not be confused with Remembrance Sunday which always falls on the second Sunday in November and this year is on November 13th. This is the time when schools, offices and churches up and down the country usually take part in a two-minute silence at 11am on Armistice Day and hold services at war memorials – yet sometimes this also happens on Remembrance Sunday instead. November 11th is also marked around the world. After Second World War, many countries changed the name of the day from Armistice Day to Remembrance Day, while the United States chose to call it Veterans Day and the day is a federal holiday.

In the spring of 1915, shortly after losing a friend in Ypres, Canadian surgeon Lieutenant Colonel John McCrae was inspired by the sight of poppies growing in battle-scarred fields so write the now famous poem In Flanders Fields. His poem moved American teacher Moina Michael who began making and selling silk poppies to friends to raise money for the ex-service community. Before long the poppies made their way to the UK and became the symbol of the Royal British Legion when it was formed in 1921. The first ever ‘Poppy Appeal’ in the UK that year raised over 106,000 pounds for war veterans. The following year a poppy factory was set up by Major George Howson MC, giving jobs to disabled former servicemen. Today the bright red poppy is regarded as a resilient flower which managed to flourish despite fields being destroyed by war.

In Flanders fields the poppies blow
Between the crosses, row on row,
That mark our place; and in the sky
The larks, still bravely singing, fly
Scarce heard amid the guns below.

We are the Dead. Short days ago
We lived, felt dawn, saw sunset glow,
Loved and were loved, and now we lie
In Flanders fields.

Take up our quarrel with the foe:
To you from failing hands we throw
The torch; be yours to hold it high.

If ye break faith with us who die
We shall not sleep, though poppies grow
In Flanders fields.