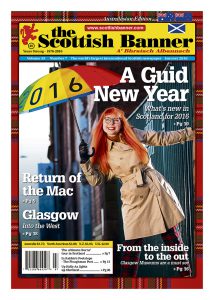 A time for reflection

If Christmas is full of hustle and bustle, New Year is a time of parties, yes but more than that, it is a time of reflection.  Just look around and think for a moment about those who touch your life, not just during the holiday season, but all year round. Think of the difference they make just by being ‘there’. Sadly, we are unaware sometimes how much they mean to us, until they are no longer, often leaving a void which is both painful and difficult for us to accept. After a discussion on this very subject during the holiday season, I took some time to think about those who affect my everyday life, bringing with them pleasure and often lighten an otherwise busy or stressful day. At the same time I reflected on those who have helped so much in bygone days bringing their own talents to the Scottish Banner, thus helping overseas Scots forge a link and voice their opinions with others. These have often become good personal friends, both now and in times past. Some are still with us, but others have now gone, leaving pleasant memories and the shadow of a warm smile.

Some years ago I met Scots author and actress Molly Weir. A well-known and delightful lady, Molly and I soon became firm friends. Molly never had a computer they were hardly known when she wrote for the Banner.  Instead we received long typewritten pages, which in turn had to be re-typed into our computers upon receiving them.  Always, there was a very long private to letter to me tucked in the envelope telling me what was happening in her life, etc. Eventually these letters, brought more and more news  of her husband Sandy’s sickness, and finally his death. I knew her heart was broken through her last letters and eventually the letters, and the columns, stopped altogether. My dear friend Molly had gone to be with her Sandy, which is where I knew she wanted to be. I still miss ‘our Molly.’

Author Nigel Tranter, was perhaps the most well known and most loved writer to ever come out of Scotland. He wrote many famous books as well as numerous prolific articles about Scottish history for the Banner – which he seemed to know like the back of his hand. These were often  accompanied by the same warm and friendly letters.  I was astounded and very surprised when he first offered to write articles for us, and of course, agreed with his offer. Nigel did continue to write for us, until he could no longer when he departed this earth. There are still dozens of Nigel’s’ private letters to us in files here at the Scottish Banner office. They can never be discarded as they are his words, written just for the Banner. Upon his death his daughter inherited all copyright to his works.  She knew her father held the Scottish Banner in high regard and shortly after his passing, gave us permission to use his articles in future issues. A most generous and cherished legacy, and for which I am still most grateful. Yet I still miss Nigel himself and am very proud to have known such a man of his calibre.

Charlie Mill who also wrote for the Banner was not a famous man, but for us he was a true hero, coming through as he did, with many interesting articles each month. We cherished him greatly and although we knew he had health problems, it was a terrible and tragic  blow when we heard from his daughter that he  had passed away. He did so leaving us with lovely memories of his views on Scottish life. But this is not meant to be about those who have gone before. There are others whose names we are proud to have in these pages, and who have been there for a long time, and who we hope will continue be there for a much longer time to come.

My dear friend and fellow writer, Ron Dempsey is one of these. Ron brings us an enlightening column on Scottish names each month and is an important part of the Scottish Banner team. Ron has a loyal and strong readership who would probably revolt were he to miss a month! Lady Fiona MacGregor whose friendship I have treasured  for many years, continues to write wonderful articles from the across Scotland. Using her pen the way an artist uses brushes, she paints a veritable picture of life in her part of the world every month.  We are also so fortunate to have some other great contributors such as Angus Whitson, Dr Ken B Moody, Marieke McBean, Joyce Milne D’Auria , David McVey and Jim Stoddart, all who help us make the Scottish Banner what it is today as we go into our 40th year of publication. These are just a few of those who come to mind when I think of those whose lives not only touch on mine, but also reach out across the miles with their words touching readers around the world.  I say this knowing how many wonderful comments they receive here at the Banner.

At this New Year, I would also like to recognise our readers, without whom there be no Scottish Banner.  At these offices we will continue bringing you news and views of Scotland, both from today and yesterday. From all of us on the Banner team both here in North America and from our offices in Australia, so ably handled by my son Sean, may we wish all of our readers, contributors, advertisers and friends, a happy and healthy 2016.  This year also sees the Scottish Banner reach the incredible milestone of 40 continuous years of monthly publication in July. In Scotland January starts The Year of Innovation, Architecture and Design 2016 which you can read about in this and future editions throughout the year, this month we start with a focus on Glasgow.

The best small country in the world

To Scotland, the best small country in the world, long may she flourish and may the fire never dim within the hearts of her sons and daughters, no matter where in this world they have settled. And last but by no means least, to this amazing world we all share. May we continue to live in peace, freedom and happiness along with others we share it with. May we have pride in our hearts when we consider where we live and how fortunate we are in so many ways. God bless 2016